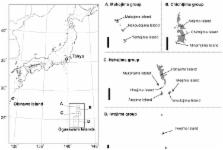 Angiostrongylus cantonensis (Chen, 1935) is a parasite of murid rodents and causative agent of human neuro-angiostrongyliasis. In 2011, the Ogasawara Islands in the western North Pacific were assigned a World Natural Heritage site status. The occurrence of A. cantonensis is well documented in the Chichijima, Hahajima, and Anijima Islands. However, the occurrence of A. cantonensis in the other islands of the Ogasawara Islands has not been reported.

Between March 2010 and July 2011, 57 Rattus norvegicus and 79 R. rattus were collected from 9 islands (the Hahajima group: Anejima, Imoutojima, Meijima, Mukohjima, and Hirajima; Chichijima group: Minamijima; Mukojima group: Nakoudojima and Yomejima; and Iwojima group: Iwojima). Adult nematodes were found in the pulmonary artery of 46 R. norvegicus collected in the 5 islands of the Hahajima group (Anejima, Meijima, Imoutojima, Hrajima, and Mukohjima Islands). These nematodes were identified by molecular analysis as A. cantonensis. Comparison of the mitochondrial DNA sequences confirmed that all the samples from the Ogasawara Islands shared only a single lineage of A. cantonensis, which has been previously detected in the Okinawa, Hawaii, and Brazil.

Kazutaka Katoh,  Hiroyuki Toh (2008)
Background Structural alignment of RNAs is becoming important, since the discovery of functional non-coding RNAs (ncRNAs). Recent studies, mainly based on various approximations of the Sankoff algorithm, have resulted in considerable improvement in the accuracy of pairwise structural alignment. In contrast, for the cases with more than two sequences, the practical merit of structural alignment remains unclear as compared to traditional sequence-based methods, although the importance of multiple structural alignment is widely recognized. Results We took a different approach from a straightforward extension of the Sankoff algorithm to the multiple alignments from the viewpoints of accuracy and time complexity. As a new option of the MAFFT alignment program, we developed a multiple RNA alignment framework, X-INS-i, which builds a multiple alignment with an iterative method incorporating structural information through two components: (1) pairwise structural alignments by an external pairwise alignment method such as SCARNA or LaRA and (2) a new objective function, Four-way Consistency, derived from the base-pairing probability of every sub-aligned group at every multiple alignment stage. Conclusion The BRAliBASE benchmark showed that X-INS-i outperforms other methods currently available in the sum-of-pairs score (SPS) criterion. As a basis for predicting common secondary structure, the accuracy of the present method is comparable to or rather higher than those of the current leading methods such as RNA Sampler. The X-INS-i framework can be used for building a multiple RNA alignment from any combination of algorithms for pairwise RNA alignment and base-pairing probability. The source code is available at the webpage found in the Availability and requirements section.

Invasive Snails and an Emerging Infectious Disease: Results from the First National Survey on Angiostrongylus cantonensis in China

Competing Interests: Tatsuo Yabe is the President and researcher of Rat Control Consulting. Noriyuki Komatsu is a researcher employed by Civil International Corporation. There are no patents, products in development, or marketed products to declare. This does not alter the authors’ adherence to all the PLOS ONE policies on sharing data and materials.

This study was supported by Grant-in Aid from the Ministry of Health, Labor and Welfare of Japan (H20-Sinkou-ippan-015), and Grant-in Aid from Japan Society for the Promotion of Sciences (#25460513). The funders had no role in study design, data collection and analysis, decision to publish, or preparation of the manuscript.