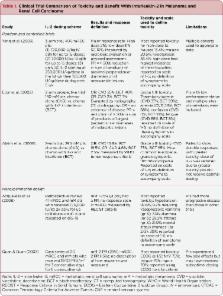 Journal: Journal of the Advanced Practitioner in Oncology

Interleukin-2 (IL-2) therapy has been used with success in curing meta­static renal cell carcinoma and melanoma in a small minority of patients. However, the benefits can be accompanied by severe toxicity. This review of the literature discusses varying doses of IL-2 and their associated re­sponse rates and the toxicities associated with treatment. The review also explores the maximally beneficial dose with the most tolerable side effects. Although the higher-dose regimens with a more frequent dosing schedule produce higher-grade toxicity, they were found to deliver the most durable and complete responses. It is recommended to use a higher-dose regimen (720,000 IU/kg every 8 hours for a maximum of 15 doses) and provide sup­portive care for toxicity, so patients can have maximal benefit from therapy.

Ronald J. A. Wanders,  Kiliaan van Wees,  S. Kaplan … (2000)
Anticancer cytotoxic agents go through a process by which their antitumor activity-on the basis of the amount of tumor shrinkage they could generate-has been investigated. In the late 1970s, the International Union Against Cancer and the World Health Organization introduced specific criteria for the codification of tumor response evaluation. In 1994, several organizations involved in clinical research combined forces to tackle the review of these criteria on the basis of the experience and knowledge acquired since then. After several years of intensive discussions, a new set of guidelines is ready that will supersede the former criteria. In parallel to this initiative, one of the participating groups developed a model by which response rates could be derived from unidimensional measurement of tumor lesions instead of the usual bidimensional approach. This new concept has been largely validated by the Response Evaluation Criteria in Solid Tumors Group and integrated into the present guidelines. This special article also provides some philosophic background to clarify the various purposes of response evaluation. It proposes a model by which a combined assessment of all existing lesions, characterized by target lesions (to be measured) and nontarget lesions, is used to extrapolate an overall response to treatment. Methods of assessing tumor lesions are better codified, briefly within the guidelines and in more detail in Appendix I. All other aspects of response evaluation have been discussed, reviewed, and amended whenever appropriate.

Randomized study of high-dose and low-dose interleukin-2 in patients with metastatic renal cancer.

Susan Morton,  Arlene S. Rosenberg,  Patrick Hwu … (2003)
This three-arm randomized study compares response rates and overall survival of patients with metastatic renal cell cancer (RCC) receiving high-dose or one of two low-dose interleukin-2 (IL-2) regimens. Patients with measurable metastatic RCC and a good performance status were randomized to receive either 720,000 U/kg (high-dose [HD]) or 72,000 U/kg (low-dose [LD]), both given by intravenous (IV) bolus every 8 hours. After randomly assigning 117 patients, a third arm of low-dose daily subcutaneous IL-2 was added, and an additional 283 patients were randomly assigned. A total of 156 patients were randomly assigned to HD IV IL-2, and 150 patients to LD IV IL-2. Toxicities were less frequent with LD IV IL-2 (especially hypotension), but there were no IL-2-related deaths in any arm. There was a higher response proportion with HD IV IL-2 (21%) versus LD IV IL-2 (13%; P =.048) but no overall survival difference. The response rate of subcutaneous IL-2 (10%, partial response and complete response) was similar to that of LD IV IL-2, differing from HD IV (P =.033). Response durability and survival in completely responding patients was superior with HD IV compared with LD IV therapy (P =.04). Major tumor regressions, as well as complete responses, were seen with all regimens tested. IL-2 was more clinically active at maximal doses, although this did not produce an overall survival benefit. The immunological factors which constrain the curative potential of IL-2 to only a small percentage of patients need to be further elucidated.

High-dose interleukin-2 for the treatment of metastatic renal cell carcinoma : a retrospective analysis of response and survival in patients treated in the surgery branch at the National Cancer Institute between 1986 and 2006.

Richard Sherry,  Udai S Kammula,  Brian O. Smith … (2008)
The treatment of metastatic renal cell carcinoma (RCC) with high-dose interleukin-2 (HD IL-2) has resulted in durable tumor regression in a minority of patients. The current study presents the authors' 20-year experience administering this immunotherapeutic agent. Patients with metastatic RCC (n = 259) were treated with HD IL-2 alone from January 13, 1986 through December 31, 2006 at the Surgery Branch of the National Cancer Institute. Potential predictive factors for response and survival, both pretreatment and treatment-related, were first subjected to univariate analysis and then to multivariate logistic regression or a Cox proportional hazards model. Finally, the authors investigated Memorial Sloan-Kettering Cancer Center (MSKCC) prognostic factors for survival to assess their predictive value in the patient population in the current study. A total of 23 patients experienced a complete response and 30 patients achieved a partial response, for an overall objective response rate of 20%. All partial responders had developed disease recurrence at the time of last follow-up, but only 4 complete responders had experienced disease recurrence by that time. Despite toxicities, only 2 patients developed treatment-related mortalities over this same time period. A higher baseline weight (P = .05) and MSKCC prognostic factors (P = .02) were found to be the variables most associated with response. For survival >4 years and overall survival, several pretreatment and treatment-related factors maintained significance, but none more so than response (P < .0001). HD IL-2 can induce complete tumor regression in a small number of patients, and many patients have experienced extended disease-free intervals. Given its relative safety, HD IL-2 should still be considered a first-line therapy in patients with metastatic RCC who have an overall good performance status.

This is an open-access article distributed under the terms of the Creative Commons Attribution License, which permits unrestricted use, distribution, and reproduction in any medium, provided the original work is properly cited and is for non-commercial purposes.