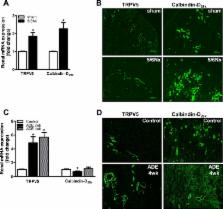 Mingjun Shi,  Orson W. Moe,  M. H. Hu … (2010)
Soft-tissue calcification is a prominent feature in both chronic kidney disease (CKD) and experimental Klotho deficiency, but whether Klotho deficiency is responsible for the calcification in CKD is unknown. Here, wild-type mice with CKD had very low renal, plasma, and urinary levels of Klotho. In humans, we observed a graded reduction in urinary Klotho starting at an early stage of CKD and progressing with loss of renal function. Despite induction of CKD, transgenic mice that overexpressed Klotho had preserved levels of Klotho, enhanced phosphaturia, better renal function, and much less calcification compared with wild-type mice with CKD. Conversely, Klotho-haploinsufficient mice with CKD had undetectable levels of Klotho, worse renal function, and severe calcification. The beneficial effect of Klotho on vascular calcification was a result of more than its effect on renal function and phosphatemia, suggesting a direct effect of Klotho on the vasculature. In vitro, Klotho suppressed Na(+)-dependent uptake of phosphate and mineralization induced by high phosphate and preserved differentiation in vascular smooth muscle cells. In summary, Klotho is an early biomarker for CKD, and Klotho deficiency contributes to soft-tissue calcification in CKD. Klotho ameliorates vascular calcification by enhancing phosphaturia, preserving glomerular filtration, and directly inhibiting phosphate uptake by vascular smooth muscle. Replacement of Klotho may have therapeutic potential for CKD.

A Tamori,  T Nakatani,  T Kuroki … (2001)
We recently identified a novel gene, termed klotho (kl) that is involved in the development of a syndrome in mice resembling human aging. A defect of the kl gene expression in mice leads to multiple disorders including arteriosclerosis, osteoporosis, ectopic calcification, and skin atrophy together with short life-span and infertility. Patients with chronic renal failure (CRF), develop multiple complications that are reminiscent of phenotypes observed in kl mutant mice. Furthermore, the kl gene is mainly expressed in kidney and brain. These evidences above suggest the possible involvement of Klotho function in the complications arising in CRF patients. To investigate the above possibility, we examined the kidneys of 10 clinically or histologically diagnosed CRF cases. The level of kl gene expression was measured by utilizing RNase protection assay. The expression of Klotho protein was assayed by utilizing Western blot analysis and by immunohistochemistry. The levels of kl mRNA expression were greatly reduced in all CRF kidneys. Moreover, the production of Klotho protein was also severely reduced in all CRF kidneys. These results suggest that the decrease in kl gene expression in CRF patients may underlie the deteriorating process of multiple complications in the CRF patients. Copyright 2001 Academic Press.

The beta-glucuronidase klotho hydrolyzes and activates the TRPV5 channel.

René Bindels,  C Topala,  J. Hoenderop … (2005)
Blood calcium concentration is maintained within a narrow range despite large variations in dietary input and body demand. The Transient Receptor Potential ion channel TRPV5 has been implicated in this process. We report here that TRPV5 is stimulated by the mammalian hormone klotho. Klotho, a beta-glucuronidase, hydrolyzes extracellular sugar residues on TRPV5, entrapping the channel in the plasma membrane. This maintains durable calcium channel activity and membrane calcium permeability in kidney. Thus, klotho activates a cell surface channel by hydrolysis of its extracellular N-linked oligosaccharides.

¶ Membership of the NIGRAM Consortium is provided in the Acknowledgments.

This project is part of the NIGRAM consortium, financially supported by the Dutch Kidney Foundation (CP10.11). WPP,MV,EPL,FS,MGV,JGH and RJB are authors who received the funding. The funders had no role in study design, data collection and analysis, decision to publish, or preparation of the manuscript.

Data Availability All relevant data is included in the manuscript or given in the supporting information.
Data availability:
ScienceOpen disciplines: Uncategorized