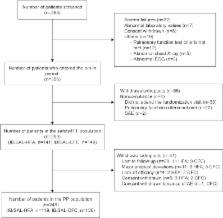 The use of chlorofluorocarbons (CFCs) has contributed to the depletion of the stratospheric ozone layer resulting in serious health concerns. Ipratropium bromide/salbutamol sulphate CFC-pressurized metered-dose inhalers (IB/SAL-CFC pMDI) have been in widespread use for many years without any apparent ill consequences. This combination has now been reformulated using the hydrofluoroalkane (HFA) propellant. This study sought to establish the clinical noninferiority of a new HFA-containing IB/SAL pMDI to the conventional IB/SAL-CFC pMDI in subjects with mild/moderate COPD.

This was a randomized, double-blind, parallel-group, multicenter study in two consecutive periods: a 14-day run-in period followed by a 85-day treatment period. Eligible mild-to-moderate stable COPD subjects aged 40−75 years were enrolled into the study and entered the run-in period during which subjects withdrew all the bronchodilators, except for salbutamol as rescue medication. Subjects were randomized to 85 days treatment with either IB/SAL-HFA or IB/SAL-CFC, 20 μg qid.

Of the 290 randomized patients, 249 completed the study. The primary efficacy variable was the change in forced expiratory volume in one second from predose to 60 minutes after dosing on day 85. At the end of the treatment period, the adjusted mean change in forced expiratory volume in one second at 60 minutes was 123 mL in the IB/SAL-HFA pMDI group and 115 mL in the IB/SAL-CFC pMDI group. Because the lower limit of the 95% confidence interval for the between-group difference (−62 mL) was well within the noninferiority margin (−100 mL), the HFA formulation was deemed clinically noninferior to the CFC formulation. This finding was supported by secondary efficacy assessments. Both formulations of IB/SAL were well tolerated during the prolonged multiple dosing.

Standards for the diagnosis and care of patients with chronic obstructive pulmonary disease (COPD) and asthma. This official statement of the American Thoracic Society was adopted by the ATS Board of Directors, November 1986.

APA Standards (1987)
Chronic obstructive pulmonary disease (COPD) and asthma are the major causes of pulmonary disability in the United States, with at least 10 million Americans suffering form COPD and up to 5% of the population afflicted with asthma. Over the past 20 years, major strides have been made in our understanding of the pathophysiology of these disorders, although there are still large gaps in our knowledge. While a number of position papers and statements have been promulgated by the American Thoracic Society concerning various aspects of the diagnosis and treatment of COPD and asthma, it was felt that a review of the overall topic was timely. This statement represents the combined efforts of a Task Group appointed by the Scientific Assemble of Clinical Problems of the American Thoracic Society to accomplish this task. Clearly, we could not cover every aspect of this broad topic nor even provide a detailed review of those areas addressed. We elected instead to concentrate on clinically relevant topics and to provide sufficient data to be useful as a guide as well as to include selected, but in no was exhaustive, references. The first two chapters define the entities and set forth recommendations for diagnosis, hospital admission, and discharge. The remaining four chapters critically review the various facets of therapy. We have noted controversial areas and those were conclusive experimental data are not yet available. In these situations, the committee often decided to take a position on one side or the other based upon the best available information.

Ruben Restrepo,  Melissa Alvarez,  Leonard Wittnebel … (2008)
Although medical treatment of COPD has advanced, nonadherence to medication regimens poses a significant barrier to optimal management. Underuse, overuse, and improper use continue to be the most common causes of poor adherence to therapy. An average of 40%–60% of patients with COPD adheres to the prescribed regimen and only 1 out of 10 patients with a metered dose inhaler performs all essential steps correctly. Adherence to therapy is multifactorial and involves both the patient and the primary care provider. The effect of patient instruction on inhaler adherence and rescue medication utilization in patients with COPD does not seem to parallel the good results reported in patients with asthma. While use of a combined inhaler may facilitate adherence to medications and improve efficacy, pharmacoeconomic factors may influence patient’s selection of both the device and the regimen. Patient’s health beliefs, experiences, and behaviors play a significant role in adherence to pharmacological therapy. This manuscript reviews important aspects associated with medication adherence in patients with COPD and identifies some predictors of poor adherence.