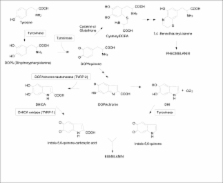 Skin pigmentary abnormalities are seen as aesthetically unfavorable and have led to the development of cosmetic and therapeutic treatment modalities of varying efficacy. Hence, several putative depigmenting agents aimed at modulating skin pigmentation are currently being researched or sold in commercially available products. In this review we will discuss the regulation of processes that control skin complexion coloration. This includes direct inhibition of tyrosinase and related melanogenic enzymes, regulation of melanocyte homeostasis, alteration of constitutive and facultative pigmentation and down-regulation of melanosome transfer to the keratinocytes. These various processes, in the complex mechanism of skin pigmentation, can be regulated individually or concomitantly to alter complexion coloration and thus ameliorate skin complexion diseases.

Mehdi Khaled,  Carmit Levy,  Maxine Fisher (2006)
Microphthalmia-associated transcription factor (MITF) acts as a master regulator of melanocyte development, function and survival by modulating various differentiation and cell-cycle progression genes. It has been demonstrated that MITF is an amplified oncogene in a fraction of human melanomas and that it also has an oncogenic role in human clear cell sarcoma. However, MITF also modulates the state of melanocyte differentiation. Several closely related transcription factors also function as translocated oncogenes in various human malignancies. These data place MITF between instructing melanocytes towards terminal differentiation and/or pigmentation and, alternatively, promoting malignant behavior. In this review, we survey the roles of MITF as a master lineage regulator in melanocyte development and its emerging activities in malignancy. Understanding the molecular function of MITF and its associated pathways will hopefully shed light on strategies for improving therapeutic approaches for these diseases.

L Frémont (2000)
Resveratrol (3, 4', 5 trihydroxystilbene) is a naturally occuring phytoalexin produced by some spermatophytes, such as grapevines, in response to injury. Given that it is present in grape berry skins but not in flesh, white wine contains very small amounts of resveratrol, compared to red wine. The concentrations in the form of trans- and cis- isomers of aglycone and glucosides are subjected to numerous variables. In red wine, the concentrations of the trans-isomer, which is the major form, generally ranges between 0.1 and 15 mg/L. As phenolic compound, resveratrol contributes to the antioxidant potential of red wine and thereby may play a role in the prevention of human cardiovascular diseases. Resveratrol has been shown to modulate the metabolism of lipids, and to inhibit the oxidation of low-density lipoproteins and the aggregation of platelets. Moreover, as phytoestrogen, resveratrol may provide cardiovascular protection. This compound also possesses anti-inflammatory and anticancer properties. However, the bioavailability and metabolic pathways must be known before drawing any conclusions on the benefits of dietary resveratrol to health.

Neal Copeland,  Eirikur Steingrimsson,  Johnie N. Jenkins (2003)
The first mouse microphthalmia transcription factor (Mitf ) mutation was discovered over 60 years ago, and since then over 24 spontaneous and induced mutations have been identified at the locus. Mitf encodes a member of the Myc supergene family of basic helix-loop-helix zipper (bHLH-Zip) transcription factors. Like Myc, Mitf regulates gene expression by binding to DNA as a homodimer or as a heterodimer with another related family member, in the case of Mitf the Tfe3, Tfeb, and Tfec proteins. The study of Mitf has provided many insights into the biology of melanocytes and helped to explain how melanocyte-specific gene expression and signaling is regulated. The human homologue of MITF is mutated in patients with the pigmentary and deafness disorder Waardenburg Syndrome Type 2A (WS2A). The mouse Mitf mutations therefore serve as a model for the study of this human disease. Mutations and/or aberrant expression of several MITF family member genes have also been reported in human cancer, including melanoma (MITF), papillary renal cell carcinoma (TFE3, TFEB), and alveolar soft part sarcoma (TFE3). Genes in the MITF/TFE pathway may therefore also represent valuable therapeutic targets for the treatment of human cancer. Here we review recent developments in the analysis of Mitf function in vivo and in vitro and show how traditional genetics, modern forward genetics and in vitro biochemical analyses have combined to produce an intriguing story on the role and actions of a gene family in a living organism.