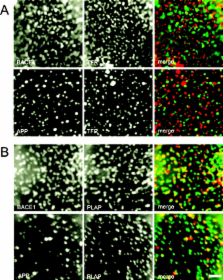 Formation of senile plaques containing the β-amyloid peptide (Aβ) derived from the amyloid precursor protein (APP) is an invariant feature of Alzheimer's disease (AD). APP is cleaved either by β-secretase or by α-secretase to initiate amyloidogenic (release of Aβ) or nonamyloidogenic processing of APP, respectively. A key to understanding AD is to unravel how access of these enzymes to APP is regulated. Here, we demonstrate that lipid rafts are critically involved in regulating Aβ generation. Reducing cholesterol levels in N2a cells decreased Aβ production. APP and the β-site APP cleavage enzyme (BACE1) could be induced to copatch at the plasma membrane upon cross-linking with antibodies and to segregate away from nonraft markers. Antibody cross-linking dramatically increased production of Aβ in a cholesterol-dependent manner. Aβ generation was dependent on endocytosis and was reduced after expression of the dynamin mutant K44A and the Rab5 GTPase-activating protein, RN-tre. This inhibition could be overcome by antibody cross-linking. These observations suggest the existence of two APP pools. Although APP inside raft clusters seems to be cleaved by β-secretase, APP outside rafts undergoes cleavage by α-secretase. Thus, access of α- and β-secretase to APP, and therefore Aβ generation, may be determined by dynamic interactions of APP with lipid rafts.

Cleavage of structural proteins during the assembly of the head of bacteriophage T4.

Ben Small,  E Corder,  D Schmechel … (1993)
The apolipoprotein E type 4 allele (APOE-epsilon 4) is genetically associated with the common late onset familial and sporadic forms of Alzheimer's disease (AD). Risk for AD increased from 20% to 90% and mean age at onset decreased from 84 to 68 years with increasing number of APOE-epsilon 4 alleles in 42 families with late onset AD. Thus APOE-epsilon 4 gene dose is a major risk factor for late onset AD and, in these families, homozygosity for APOE-epsilon 4 was virtually sufficient to cause AD by age 80.