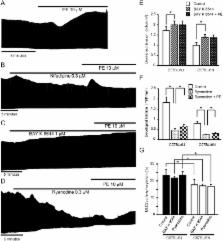 Cardiac myosin light chain kinase (cMLCK) plays an obligatory role in maintaining the phosphorylation levels of regulatory myosin light chain (MLC2), which is thought to be crucial for regulation of cardiac function. To test this hypothesis, the role played by ventricular MLC2 (MLC2v) phosphorylation was investigated in the phenylephrine-induced increase in twitch tension using the naturally-occurring mouse strain, C57BL/6N, in which cMLCK is down regulated.

We identified a new isoform of cMLCK with a molecular mass of 61kDa(cMLCK-2) in mouse heart. In the C57BL/6N strain, only cMLCK-2 was expressed and the basal MLC2v phosphorylation levels and the phenylephrine-induced inotropic response were both smaller. We suggest that a lower phenylephrine-induced inotropic response may be caused by the lower basal MLC2v phosphorylation levels in this strain.

H. Sweeney,  Matthew Stull,  Aaron B. Bowman (1993)
The regulatory light chain of myosin (RLC) is phosphorylated in striated muscles by Ca2+/calmodulin-dependent myosin light chain kinase. Unique biochemical and cellular properties of this phosphorylation system in fast-twitch skeletal muscle maintain RLC in the phosphorylated form for a prolonged period after a brief tetanus or during low-frequency repetitive stimulation. This phosphorylation correlates with potentiation of the rate of development and maximal extent of isometric twitch tension. In skinned fibers, RLC phosphorylation increases force production at low levels of Ca2+ activation, via a leftward shift of the force-pCa relationship, and increases the rate of force development over a wide range of activation levels. In heart and slow-twitch skeletal muscle, the functional consequences of RLC phosphorylation are probably similar, and the primary physiological determinants are phosphorylation and dephosphorylation properties unique to each muscle. The mechanism for these physiological responses probably involves movement of the phosphorylated myosin cross bridges away from the thick-filament backbone. The movement of cross bridges may also contribute to the regulation of myosin interactions with actin in vertebrate smooth and invertebrate striated muscles.

Julien Davis,  Shahin Hassanzadeh,  Steve Winitsky … (2001)
Evolution of the human heart has incorporated a variety of successful strategies for motion used throughout the animal kingdom. One such strategy is to add the efficiency of torsion to compression so that blood is wrung, as well as pumped, out of the heart. Models of cardiac torsion have assumed uniform contractile properties of muscle fibers throughout the heart. Here, we show how a spatial gradient of myosin light chain phosphorylation across the heart facilitates torsion by inversely altering tension production and the stretch activation response. To demonstrate the importance of cardiac light chain phosphorylation, we cloned a myosin light chain kinase from a human heart and have identified a gain-in-function mutation in two individuals with cardiac hypertrophy.

A B Colson,  Rajan Patel,  D FitzSimons … (2010)
Phosphorylation of myosin regulatory light chain (RLC) by myosin light chain kinase (MLCK) and myosin binding protein-C (cMyBP-C) by protein kinase A (PKA) independently accelerate the kinetics of force development in ventricular myocardium. However, while MLCK treatment has been shown to increase the Ca(2+) sensitivity of force (pCa(50)), PKA treatment has been shown to decrease pCa(50), presumably due to cardiac troponin I phosphorylation. Further, MLCK treatment increases Ca(2+)-independent force and maximum Ca(2+)-activated force, whereas PKA treatment has no effect on either force. To investigate the structural basis underlying the kinase-specific differential effects on steady-state force, we used synchrotron low-angle X-ray diffraction to compare equatorial intensity ratios (I(1,1)/I(1,0)) to assess the proximity of myosin cross-bridge mass relative to actin and to compare lattice spacings (d(1,0)) to assess the inter-thick filament spacing in skinned myocardium following treatment with either MLCK or PKA. As we showed previously, PKA phosphorylation of cMyBP-C increases I(1,1)/I(1,0) and, as hypothesized, treatment with MLCK also increased I(1,1)/I(1,0), which can explain the accelerated rates of force development during activation. Importantly, interfilament spacing was reduced by 2 nm (3.5%) with MLCK treatment, but did not change with PKA treatment. Thus, RLC or cMyBP-C phosphorylation increases the proximity of cross-bridges to actin, but only RLC phosphorylation affects lattice spacing, which suggests that RLC and cMyBP-C modulate the kinetics of force development by similar structural mechanisms; however, the effect of RLC phosphorylation to increase the Ca(2+) sensitivity of force is mediated by a distinct mechanism, most probably involving changes in interfilament spacing.

This work was supported in part grants-in-aids for Scientific Research from the Ministry of Education, Science, Technology, Sports and Culture, Japan (19390211 to M.I., 25460655 to T.I., 24591113 to R.O.). The funders had no role in study design, data collection and analysis, decision to publish, or preparation of the manuscript.