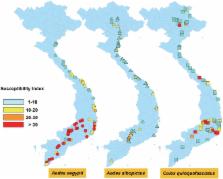 Pyrethroid resistance is envisioned to be a major problem for the vector control program since, at present, there are no suitable chemical substitutes for pyrethroids. Cross-resistance to knockdown agents, which are mainly used in mosquito coils and related products as spatial repellents, is the most serious concern. Since cross-resistance is a global phenomenon, we have started to monitor the distribution of mosquito resistance to pyrethroids. The first pilot study was carried out in Vietnam. We periodically drove along the national road from the north end to the Mekong Delta in Vietnam and collected mosquito larvae from used tires. Simplified susceptibility tests were performed using the fourth instar larvae of Aedes aegypti, Aedes albopictus, and Culex quinquefasciatus. Compared with the other species, Ae. aegypti demonstrated the most prominent reduction in susceptibility. For Ae. aegypti, significant increases in the susceptibility indices with a decrease in the latitude of collection points were observed, indicating that the susceptibility of Ae. aegypti against d-allethrin was lower in the southern part, including mountainous areas, as compared to that in the northern part of Vietnam. There was a significant correlation between the susceptibility indices in Ae. aegypti and the sum of annual pyrethroid use for malaria control (1998–2002). This might explain that the use of pyrethroids as residual treatment inside houses and pyrethroid-impregnated bed nets for malaria control is attributable to low pyrethroid susceptibility in Ae. aegypti. Such insecticide treatment appeared to have been intensively administered in the interior and along the periphery of human habitation areas where, incidentally, the breeding and resting sites of Ae. aegypti are located. This might account for the strong selection pressure toward Ae. aegypti and not Ae. albopictus.

Pyrethroid is one of the most successful insecticidal chemicals for controlling insect pests and vectors of household and public health importance. However, extensive treatment of photo-stable and highly effective pyrethroids sometimes causes resistance to insect populations. Resistance to pyrethroids belonging to the knockdown agent groups that have been used as the spatial repellents, such as mosquito coils and related products, is the most serious concern. Since this is a global phenomenon, we have started to monitor the distribution of mosquito resistance to pyrethroids and the first pilot study was carried out in Vietnam. Our study concluded that Aedes aegypti, the most important vector of dengue and dengue haemorrhagic fever, demonstrated the prominent reduction in susceptibility against d-allethrin, one of the most popular pyrethroids for spatial repellents. The extensive treatment of photo-stable pyrethroids for malaria control seemed to be one of the attributable factors. In order to effectively manage pyrethroid resistance, the establishment of a feasible insecticide management system and a regular monitoring system of pyrethroid susceptibility will be essential.

Annette Erhart,  Ngo Duc Thang,  Phan Van Ky … (2005)
In Vietnam, a large proportion of all malaria cases and deaths occurs in the central mountainous and forested part of the country. Indeed, forest malaria, despite intensive control activities, is still a major problem which raises several questions about its dynamics. A large-scale malaria morbidity survey to measure malaria endemicity and identify important risk factors was carried out in 43 villages situated in a forested area of Ninh Thuan province, south central Vietnam. Four thousand three hundred and six randomly selected individuals, aged 10–60 years, participated in the survey. Rag Lays (86%), traditionally living in the forest and practising "slash and burn" cultivation represented the most common ethnic group. The overall parasite rate was 13.3% (range [0–42.3] while Plasmodium falciparum seroprevalence was 25.5% (range [2.1–75.6]). Mapping of these two variables showed a patchy distribution, suggesting that risk factors other than remoteness and forest proximity modulated the human-vector interactions. This was confirmed by the results of the multivariate-adjusted analysis, showing that forest work was a significant risk factor for malaria infection, further increased by staying in the forest overnight (OR= 2.86; 95%CI [1.62; 5.07]). Rag Lays had a higher risk of malaria infection, which inversely related to education level and socio-economic status. Women were less at risk than men (OR = 0.71; 95%CI [0.59; 0.86]), a possible consequence of different behaviour. This study confirms that malaria endemicity is still relatively high in this area and that the dynamics of transmission is constantly modulated by the behaviour of both humans and vectors. A well-targeted intervention reducing the "vector/forest worker" interaction, based on long-lasting insecticidal material, could be appropriate in this environment.

Insecticide susceptibility of Aedes aegypti and Aedes albopictus across Thailand.

Deborah L. Harrington,  Alongkot Ponlawat,  Christopher Scott (2005)
Aedes aegypti (L.) and Aedes albopictus (Skuse), two important vectors of dengue fever and dengue hemorrhagic fever, were collected from Mae Sot, Nakhon Sawan, Nakhon Ratchasima, Surat Thani, and Phatthalung, Thailand, from July 2003 to April 2004. The patterns of insecticide susceptibility to temephos, malathion, and permethrin of both Ae. aegypti and Ae. albopictus larvae were determined. Ae. aegypti from all study sites were resistant to permethrin, they but were susceptible to malathion. Resistance to temephos was detected in all strains of Ae. aegypti, except those from Nakhon Ratchasima. Ae. albopictus larvae had low levels of resistance to all three insecticides, except Mae Sot and Phatthalung strains, which were resistant to permethrin.

Forest malaria in Vietnam: a challenge for control.

Jenny Hung,  Annette Erhart,  N Hung … (2004)
Forest malaria is a complex but common phenomenon occurring in southeast Asia. We studied its epidemiology through a prospective community-based study in central Vietnam. A total of 585 individuals were followed for two years by active case detection and biannual cross-sectional surveys. The prevalence of antibodies to Plasmodium falciparum was constantly about 20% across surveys and the incidence rate of clinical episodes of P. falciparum malaria was 0.11/person-year. Multivariate analysis showed that regular forest activity was the main risk factor for clinical malaria and malaria infections. Untreated bed nets had a significant protective effect (60%), except for people regularly sleeping in the forest. The population-attributable fraction for regular forest activity was estimated to be 53%. Our results confirm the major role played by forest activity on the malaria burden in this area and provide the basis for targeting control activities to forest workers. New interventions based on insecticide-treated materials need to be urgently evaluated.

Publisher ID: 08-PNTD-RA-0224R2
DOI: 10.1371/journal.pntd.0000391
PMC ID: 2647736
PubMed ID: 19274072
Copyright statement: Kawada et al. This is an open-access article distributed under the terms of the Creative Commons Attribution License, which permits unrestricted use, distribution, and reproduction in any medium, provided the original author and source are credited.