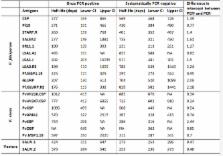 Serological markers for exposure to different Plasmodium species have recently been used in multiplex immunoassays based on the Luminex technology. However, interpretation of the assay results requires consideration of the half-life of specific antibodies against these markers. Therefore, the aim of the present study was to document the half-life of malaria specific serological makers, as well as assessing the sensitivity of these markers to pick up recent changes in malaria exposure.

Results showed that most (17/21) Ab-responses are higher in PCR positive than PCR negative individuals. Furthermore, these antibody-responses follow the same upward trend within each age group. Estimation of the half-lives showed differences between serological markers that reflect short- (seasonal) and long-term (year round) transmission trends. Ab levels declined significantly together with a decrease of PCR prevalence in a group of malaria endemic villages.

For Plasmodium falciparum, antibodies against LSA3.RE, GLURP and Pf.GLURP.R2 are most likely to be a reflexion of recent (range from 6 to 8 months) exposure in the Mekong Subregion. PvEBP is the only Plasmodium vivax Ag responding reasonably well, in spite of an estimated Ab half-life of more than 1 year. The use of Ab intensity data rather dichotomizing the continuous Ab-titre data (positive vs negative) will lead to an improved approach for serological surveillance.

Paul C. Coleman,  Patrick Corran,  Eleanor M. Riley … (2007)
To estimate the burden of malarial disease, and evaluate the likely effects of control strategies, requires reliable predictions of malaria transmission intensity. It has long been suggested that antimalarial antibody prevalences could provide a more accurate estimate of transmission intensity than traditional measures such as parasite prevalence or entomological inoculation rates, but there has been no systematic evaluation of this approach. Now, the availability of well characterized malarial antigens allows us to test whether serological measurements provide a practical method for estimating transmission. Here we present a suggested methodology, highlight the advantages and shortcomings of serological measurements of malaria transmission and identify areas in which further work is desirable.