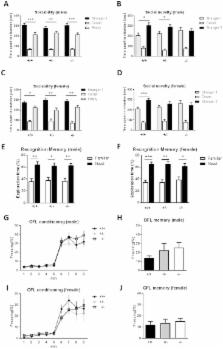 Chemokines are small secreted signaling proteins produced by a broad range of cells, including immune cells. Several studies have recently suggested potential roles of chemokines and their receptors in the pathophysiology of autism spectrum disorders (ASDs). SAM3 is a novel brain-specific chemokine-like molecule with an unknown physiological function. We explored the relevance of chemokines in the development of ASD in mice, with a focus on SAM3. We generated Sam3 gene knockout (KO) mice and characterized their behavioral phenotypes, with a focus on those relevant to ASD. Sam3-deficient mice displayed all three core phenotypes of ASD: impaired responses to social novelty, defects in social communication, and increased repetitive behavior. In addition, they showed increased anxiety. Interestingly, gender differences were identified for several behaviors: only male Sam3 KO mice exhibited increased anxiety and increased repetitive behaviors. Sam3 KO mice did not exhibit changes in other behaviors, including locomotor activities, fear learning and memory, and object recognition memory. These findings indicate that a deficiency of SAM3, a novel brain-specific chemokine-like molecule, may lead to the pathogenesis of ASDs and suggest the possibility that SAM3, a soluble factor, could be a novel therapeutic target for ASD treatment.

João Peça,  Cátia Feliciano,  Jonathan T. Ting … (2011)
Autism spectrum disorders (ASDs) comprise a range of disorders that share a core of neurobehavioural deficits characterized by widespread abnormalities in social interactions, deficits in communication as well as restricted interests and repetitive behaviours. The neurological basis and circuitry mechanisms underlying these abnormal behaviours are poorly understood. Shank3 is a postsynaptic protein, whose disruption at the genetic level is thought to be responsible for development of 22q13 deletion syndrome (Phelan-McDermid Syndrome) and other non-syndromic ASDs. Here we show that mice with Shank3 gene deletions exhibit self-injurious repetitive grooming and deficits in social interaction. Cellular, electrophysiological and biochemical analyses uncovered defects at striatal synapses and cortico-striatal circuits in Shank3 mutant mice. Our findings demonstrate a critical role for Shank3 in the normal development of neuronal connectivity and establish causality between a disruption in the Shank3 gene and the genesis of autistic like-behaviours in mice.

Marianne Leger,  Anne Quiedeville,  Valentine Bouet … (2013)
The object recognition test is now among the most commonly used behavioral tests for mice. A mouse is presented with two similar objects during the first session, and then one of the two objects is replaced by a new object during a second session. The amount of time taken to explore the new object provides an index of recognition memory. As more groups have used the protocol, the variability of the procedures used in the object recognition test has increased steadily. This protocol provides a necessary standardization of the procedure. This protocol reduces inter-individual variability with the use of a selection criterion based on a minimal time of exploration for both objects during each session. In this protocol, we describe the three most commonly used variants, containing long (3 d), short (1 d) or no habituation phases. Thus, with a short intersession interval (e.g., 6 h), this procedure can be performed in 4, 2 or 1 d, respectively, according to the duration of the habituation phase. This protocol should allow for the comparison of results from different studies, while permitting adaption of the protocol to the constraints of the experimenter.