Mechanisms of Resistance to Endocrine Therapy in Breast Cancer: Focus on Signaling Pathways, miRNAs and Genetically Based Resistance 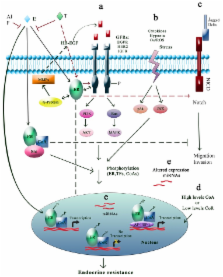 Breast cancer is the most frequent malignancy diagnosed in women. Approximately 70% of breast tumors express the estrogen receptor (ER). Tamoxifen and aromatase inhibitors (AIs) are the most common and effective therapies for patients with ERα-positive breast cancer. Alone or combined with chemotherapy, tamoxifen significantly reduces disease progression and is associated with more favorable impact on survival in patients. Unfortunately, endocrine resistance occurs, either de novo or acquired during the course of the treatment. The mechanisms that contribute to hormonal resistance include loss or modification in the ERα expression, regulation of signal transduction pathways, altered expression of specific microRNAs, balance of co-regulatory proteins, and genetic polymorphisms involved in tamoxifen metabolic activity. Because of the clinical consequences of endocrine resistance, new treatment strategies are arising to make the cells sensitive to tamoxifen. Here, we will review the current knowledge on mechanisms of endocrine resistance in breast cancer cells. In addition, we will discuss novel therapeutic strategies to overcome such resistance. Undoubtedly, circumventing endocrine resistance should help to improve therapy for the benefit of breast cancer patients.

Sashi Rattan,  Florencia Bullrich,  Massimo Negrini … (2004)
A large number of tiny noncoding RNAs have been cloned and named microRNAs (miRs). Recently, we have reported that miR-15a and miR-16a, located at 13q14, are frequently deleted and/or down-regulated in patients with B cell chronic lymphocytic leukemia, a disorder characterized by increased survival. To further investigate the possible involvement of miRs in human cancers on a genome-wide basis, we have mapped 186 miRs and compared their location to the location of previous reported nonrandom genetic alterations. Here, we show that miR genes are frequently located at fragile sites, as well as in minimal regions of loss of heterozygosity, minimal regions of amplification (minimal amplicons), or common breakpoint regions. Overall, 98 of 186 (52.5%) of miR genes are in cancer-associated genomic regions or in fragile sites. Moreover, by Northern blotting, we have shown that several miRs located in deleted regions have low levels of expression in cancer samples. These data provide a catalog of miR genes that may have roles in cancer and argue that the full complement of miRs in a genome may be extensively involved in cancers.

C C Yen,  J Puc,  BEPPINO C. GIOVANELLA … (1997)
Mapping of homozygous deletions on human chromosome 10q23 has led to the isolation of a candidate tumor suppressor gene, PTEN, that appears to be mutated at considerable frequency in human cancers. In preliminary screens, mutations of PTEN were detected in 31% (13/42) of glioblastoma cell lines and xenografts, 100% (4/4) of prostate cancer cell lines, 6% (4/65) of breast cancer cell lines and xenografts, and 17% (3/18) of primary glioblastomas. The predicted PTEN product has a protein tyrosine phosphatase domain and extensive homology to tensin, a protein that interacts with actin filaments at focal adhesions. These homologies suggest that PTEN may suppress tumor cell growth by antagonizing protein tyrosine kinases and may regulate tumor cell invasion and metastasis through interactions at focal adhesions.