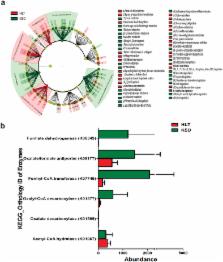 Hyperoxaluria due to endogenously synthesized and exogenously ingested oxalates is a leading cause of recurrent oxalate stone formations. Even though, humans largely rely on gut microbiota for oxalate homeostasis, hyperoxaluria associated gut microbiota features remain largely unknown. Based on 16S rRNA gene amplicons, targeted metagenomic sequencing of formyl-CoA transferase ( frc) gene and qPCR assay, we demonstrate a selective enrichment of Oxalate Metabolizing Bacterial Species (OMBS) in hyperoxaluria condition. Interestingly, higher than usual concentration of oxalate was found inhibitory to many gut microbes, including Oxalobacter formigenes, a well-characterized OMBS. In addition a concomitant enrichment of acid tolerant pathobionts in recurrent stone sufferers is observed. Further, specific enzymes participating in oxalate metabolism are found augmented in stone endures. Additionally, hyperoxaluria driven dysbiosis was found to be associated with oxalate content, stone episodes and colonization pattern of Oxalobacter formigenes. Thus, we rationalize the first in-depth surveillance of OMBS in the human gut and their association with hyperoxaluria. Our findings can be utilized in the treatment of hyperoxaluria associated recurrent stone episodes.

Carlos Caldas,  Mali Salmon-Divon,  Claudia Kutter … (2010)
RNA abundance and DNA copy number are routinely measured in high-throughput using microarray and next-generation sequencing (NGS) technologies, and the attributes of different platforms have been extensively analyzed. Recently, the application of both microarrays and NGS has expanded to include microRNAs (miRNAs), but the relative performance of these methods has not been rigorously characterized. We analyzed three biological samples across six miRNA microarray platforms and compared their hybridization performance. We examined the utility of these platforms, as well as NGS, for the detection of differentially expressed miRNAs. We then validated the results for 89 miRNAs by real-time RT-PCR and challenged the use of this assay as a "gold standard." Finally, we implemented a novel method to evaluate false-positive and false-negative rates for all methods in the absence of a reference method.

Toshihiko Takada,  Koichi Watanabe,  Takahiro Matsuki … (2004)
16S rRNA gene-targeted group-specific primers were designed and validated for specific detection and quantification of the Clostridium leptum subgroup and the Atopobium cluster. To monitor the predominant bacteria in human feces by real-time PCR, we used these specific primers together with four sets of group-specific primers for the Clostridium coccoides group, the Bacteroides fragilis group, Bifidobacterium, and Prevotella developed in a previous study (T. Matsuki, K. Watanabe, J. Fujimoto, Y. Miyamoto, T. Takada, K. Matsumoto, H. Oyaizu, and R. Tanaka, Appl. Environ. Microbiol. 68:5445-5451, 2002). Examination of DNA extracted from the feces of 46 healthy adults showed that the C. coccoides group was present in the greatest numbers (log10 10.3 +/- 0.3 cells per g [wet weight] [average +/- standard deviation]), followed by the C. leptum subgroup (log10 9.9 +/- 0.7 cells per g [wet weight]), the B. fragilis group (log10 9.9 +/- 0.3 cells per g [wet weight]), Bifidobacterium (log10 9.4 +/- 0.7 cells per g [wet weight]), and the Atopobium cluster (log10 9.3 +/- 0.7 cells per g [wet weight]). These five bacterial groups were detected in all 46 volunteers. Prevotella was found in only 46% of the subjects at a level of log10 9.7 +/- 0.8 cells per g (wet weight). Examination of changes in the population and the composition of the intestinal flora for six healthy adults over an 8-month period revealed that the composition of the flora of each volunteer remained stable throughout the test period.