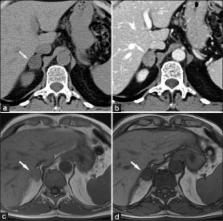 The adrenal gland is a common site of a large spectrum of abnormalities like primary tumors, hemorrhage, metastases, and enlargement of the gland from external hormonal stimulation. Most of these lesions represent nonfunctioning adrenal adenomas and thus warrant a conservative management. Multi-detector computed tomography (CT) and magnetic resonance (MR) imaging are still considered highly specific and complementary techniques for the detection and characterization of adrenal abnormalities. Radiologist can establish a definitive diagnosis for most adrenal masses (i.e., carcinoma, hemorrhage) based on imaging alone. Imaging therefore can differentiate malignant lesions from those benign and avoid unnecessary aggressive management of benign lesions. The article gives an overview of the adrenal lesions and their imaging characteristics seen on CT and MR imaging.

N R Dunnick,  Joel F Platt,  Elaine M. Caoili … (2002)
To assess the accuracy of a dedicated adrenal computed tomographic (CT) protocol. One hundred sixty-six adrenal masses were evaluated with a protocol consisting of unenhanced CT, and, for those with attenuation values greater than 10 HU, contrast material-enhanced and delayed enhanced CT. Attenuation values and enhancement washout calculations were obtained. An adenoma was diagnosed if a mass had an attenuation value of 10 HU or less at unenhanced CT or a percentage enhancement washout value of 60% or higher. The final diagnosis was adenoma in 127 masses and non-adenoma in 39. Masses measuring more than 10 HU on unenhanced CT scans were confirmed at biopsy (n = 28) or were examined for stability or change in size at follow-up CT performed at a minimum interval of 6 months (n = 33). Thirty-six (92%) of 39 non-adenomas and 124 (98%) of 127 adenomas were correctly characterized. The sensitivity and specificity of this protocol were 98% and 92%, respectively. This protocol correctly characterized 160 (96%) of 166 masses. With a combination of unenhanced and delayed enhanced CT, nearly all adrenal masses can be correctly categorized as adenomas or non-adenomas.

Characterization of adrenal masses using unenhanced CT: an analysis of the CT literature.

Elaine G. Boland,  Carmel M. McNicholas,  R. S. P. Mueller … (1998)
Unenhanced CT scanning can reliably characterize incidentally detected adrenal masses when observers use density measurements of the adrenal gland. However, controversy exists as to the optimal density threshold required to differentiate benign from malignant lesions. This study attempts to establish a consensus by performing a pooled analysis of data found in the CT literature. Ten CT reports were analyzed, from which individual adrenal lesion density measurements were obtained for 495 adrenal lesions (272 benign lesions and 223 malignant lesions). Threshold analysis generated a range of sensitivities and specificities for lesion characterization at different density thresholds. Sensitivity for characterizing a lesion as benign ranged from 47% at a threshold of 2 H to 88% at a threshold of 20 H. Similarly, specificity varied from 100% at a threshold of 2 H to 84% at a threshold of 20 H. The attempt to be absolutely certain that an adrenal lesion is benign may lead to an unacceptably low sensitivity for lesion characterization. The threshold chosen will depend on the patient population and the cost-benefit approach to patient care.

Michael Maher,  B. Lucey,  Dushyant V Sahani … (2006)
To retrospectively evaluate the accuracy of precontrast attenuation, relative percentage washout (RPW), and absolute percentage washout (APW) in distinguishing benign from malignant adrenal masses at multi-detector row computed tomography (CT). This HIPAA-compliant retrospective study had institutional review board approval; the need for informed consent was waived. One hundred twenty-two adrenal masses were evaluated in 99 patients (51 men, 48 women; age range, 37-86 years) who had undergone CT performed according to the study protocol and who either were given a pathologic diagnosis or underwent follow-up imaging. Unenhanced images were obtained before administration of 120 mL of an intravenous contrast agent with a 75-second scan delay. Delayed images were obtained after 10 minutes. RPW and APW were computed. Receiver operating characteristic (ROC) analysis was performed to compare mean attenuation and both RPW and APW. Analysis was first performed with the exclusion of pheochromocytomas, myelolipomas, and cysts. Precontrast attenuation criteria specific for benignity or malignancy were determined, and ROC analysis of results for the entire nonpheochromocytoma group was then performed. By using an RPW of 37.5% and excluding cysts and myelolipomas, all malignant lesions were detected with a sensitivity of 100% (17 of 17 lesions) and a specificity of 95% (90 of 95 lesions). Area under the binomial ROC curve (A(z)) values were 0.912, 0.985, and 0.892 for precontrast attenuation, RPW, and APW, respectively. Precontrast attenuation of less than 0 or more than 43 HU indicated benign and malignant entities, respectively. Incorporation of these criteria into the APW analysis yielded a sensitivity of 100% (17 of 17 lesions) and a specificity of 98% (93 of 95 lesions) for a threshold washout value of 52.0%. This attenuation-corrected APW generated the greatest A(z) value (ie, 0.988). Combining all the information available from the protocol yielded a sensitivity of 100% (17 of 17 lesions) and a specificity of 98% (98 of 100 lesions) for differentiating benign from malignant masses. Precontrast attenuation of less than 0 HU supercedes the washout profile in the evaluation of an individual adrenal mass. Noncalcified, nonhemorrhagic adrenal lesions with precontrast attenuation of more than 43 HU should be considered suspicious for malignancy. (c) RSNA, 2005