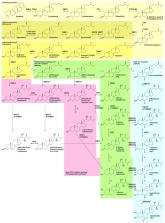 Chemical inhibitors are invaluable tools for investigating protein function in reverse genetic approaches. Their application bears many advantages over mutant generation and characterization. Inhibitors can overcome functional redundancy, their application is not limited to species for which tools of molecular genetics are available and they can be applied to specific tissues or developmental stages, making them highly convenient for addressing biological questions. The use of inhibitors has helped to elucidate hormone biosynthesis and signaling pathways and here we review compounds that were developed for the plant hormones brassinosteroids (BRs). BRs are steroids that have strong growth-promoting capacities, are crucial for all stages of plant development and participate in adaptive growth processes and stress response reactions. In the last two decades, impressive progress has been made in BR inhibitor development and application, which has been instrumental for studying BR modes of activity and identifying and characterizing key players. Both, inhibitors that target biosynthesis, such as brassinazole, and inhibitors that target signaling, such as bikinin, exist and in a comprehensive overview we summarize knowledge and methodology that enabled their design and key findings of their use. In addition, the potential of BR inhibitors for commercial application in plant production is discussed.

Isabelle Ruel,  V Stambolic,  James Woodgett (1996)
Exposing eukaryotic cells to lithium ions (Li+) during development has marked effects on cell fate and organization. The phenotypic consequences of Li+ treatment on Xenopus embryos and sporulating Dictyostelium are similar to the effects of inhibition or disruption, respectively, of a highly conserved protein serine/threonine kinase, glycogen synthase kinase-3 (GSK-3). In Drosophila, the GSK-3 homologue is encoded by zw3sgg, a segment-polarity gene involved in embryogenesis that acts downstream of wg. In higher eukaryotes, GSK-3 has been implicated in signal transduction pathways downstream of phosphoinositide 3-kinase and mitogen-activated protein kinases. We investigated the effect of Li+ on the activity of the GSK-3 family. At physiological doses, Li+ inhibits the activity of human GSK-3 beta and Drosophila Zw3Sgg, but has no effect on other protein kinases. The effect of Li+ on GSK-3 is reversible in vitro. Treatment of cells with Li+ inhibits GSK-3-dependent phosphorylation of the microtubule-associated protein Tau. Li+ treatment of Drosophila S2 cells and rat PC12 cells induces accumulation of cytoplasmic Armadillo/beta-catenin, demonstrating that Li+ can mimic Wingless signalling in intact cells, consistent with its inhibition of GSK-3. Li+ acts as a specific inhibitor of the GSK-3 family of protein kinases in vitro and in intact cells, and mimics Wingless signalling. This reveals a possible molecular mechanism of Li+ action on development and differentiation.

Kyoung Nam,  Jianming Li (2002)
The Arabidopsis BAK1 (BRI1 Associated receptor Kinase 1) was identified by a yeast two-hybrid screen as a specific interactor for BRI1, a critical component of a membrane brassinosteroid (BR) receptor. In yeast, BAK1/BRI1 interaction activates their kinase activities through transphosphorylation. BAK1 and BRI1 share similar gene expression and subcellular localization patterns and physically associate with each other in plants. Overexpression of the BAK1 gene leads to a phenotype reminiscent of BRI1-overexpression transgenic plants and rescues a weak bri1 mutant. In contrast, a bak1 knockout mutation gives rise to a weak bri1-like phenotype and enhances a weak bri1 mutation. We propose that BAK1 and BRI1 function together to mediate plant steroid signaling.

The determination of enzyme inhibitor constants.