The effects of educational curricula and training on LGBT-specific health issues for healthcare students and professionals: a mixed-method systematic review 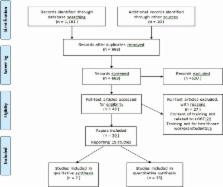 Introduction: Poor access of lesbian, gay, bisexual and transgender (LGBT) people to healthcare providers with clinical and cultural competency contributes to health inequalities between heterosexual/cisgender and LGBT people. This systematic review assesses the effect of educational curricula and training for healthcare students and professionals on LGBT healthcare issues.

Methods: Systematic review; the search terms, strategy and process as well as eligibility criteria were predefined and registered prospectively on PROSPERO. A systematic search of electronic databases was undertaken. Screening for eligible studies and data extraction were done in duplicate. All the eligible studies were assessed for risk of bias. The outcome of interest was a change in participants’ knowledge, attitude and or practice.

Results: Out of 1171 papers identified, 16 publications reporting 15 studies were included in the review. Three were non-randomized controlled studies and 12 had a pre/post-design; two had qualitative components. Bias was reported in the selection of participants and confounding. Risk reported was moderate/mild. Most studies were from the USA, the topics revolved around key terms and terminology, stigma and discrimination, sexuality and sexual dysfunction, sexual history taking, LGBT-specific health and health disparities. Time allotted for training ranged from 1 to 42 hours, the involvement of LGBT people was minimal. The only intervention in sub-Saharan Africa focused exclusively on men who have sex with men. All the studies reported statistically significant improvement in knowledge, attitude and/or practice post-training. Two main themes were identified from the qualitative studies: the process of changing values and attitudes to be more LGBT inclusive, and the constraints to the application of new values in practice.

Anne Rygaard Bennedsen,  Johanna Claass,  L Bruns … (2007)
Violence and rape are believed to fuel the HIV epidemic in countries affected by conflict. We compared HIV prevalence in populations directly affected by conflict with that in those not directly affected and in refugees versus the nearest surrounding host communities in sub-Saharan African countries. Seven countries affected by conflict (Democratic Republic of Congo, southern Sudan, Rwanda, Uganda, Sierra Leone, Somalia, and Burundi) were chosen since HIV prevalence surveys within the past 5 years had been done and data, including original antenatal-care sentinel surveillance data, were available. We did a systematic and comprehensive literature search using Medline and Embase. Only articles and reports that contained original data for prevalence of HIV infection were included. All survey reports were independently evaluated by two epidemiologists to assess internationally accepted guidelines for HIV sentinel surveillance and population-based surveys. Whenever possible, data from the nearest antenatal care and host country sentinel site of the neighbouring countries were presented. 95% CIs were provided when available. Of the 295 articles that met our search criteria, 88 had original prevalence data and 65 had data from the seven selected countries. Data from these countries did not show an increase in prevalence of HIV infection during periods of conflict, irrespective of prevalence when conflict began. Prevalence in urban areas affected by conflict decreased in Burundi, Rwanda, and Uganda at similar rates to urban areas unaffected by conflict in their respective countries. Prevalence in conflict-affected rural areas remained low and fairly stable in these countries. Of the 12 sets of refugee camps, nine had a lower prevalence of HIV infection, two a similar prevalence, and one a higher prevalence than their respective host communities. Despite wide-scale rape in many countries, there are no data to show that rape increased prevalence of HIV infection at the population level. We have shown that there is a need for mechanisms to provide time-sensitive information on the effect of conflict on incidence of HIV infection, since we found insufficient data to support the assertions that conflict, forced displacement, and wide-scale rape increase prevalence or that refugees spread HIV infection in host communities.

Christian Schulz,  Mischa F Möller,  Daniel Seidler … (2013)
Background By 2013 Palliative Care will become a mandatory examination subject in the medical curriculum in Germany. There is a pressing need for effective and well-designed curricula and assessment methods. Debates are on going as how Undergraduate Palliative Care Education (UPCE) should be taught and how knowledge and skills should be assessed. It is evident by this time that the development process of early curricula in the US and UK has led to a plethora of diverse curricula which seem to be partly ineffective in improving the care for the seriously ill and dying offered by newly qualified doctors, as is demonstrated in controlled evaluations. The goals of this study were to demonstrate an evidence-based approach towards developing UPCE curricula and investigate the change in medical students’ self-perceived readiness to deal with palliative care patients and their families. Methods To evaluate the effects of the UPCE curriculum we chose a prospective, controlled, quasi-experimental, pre, retrospective-pre, post study design. A total of n = 37 3rd and 4th –year medical students were assigned to the intervention group (n = 15; 4th -year) and to the control group (n = 22; 3rd-year). Resting on the self-efficacy concept of Bandura the measurement was conducted by a refined test-battery based on two independent measurements (the revised Collet-Lester-Fear-of-Death-Scale and the instrument of the “Program in Palliative Care Education and Practice” at Harvard Medical School) including 68 items altogether in a five-point Likert-scale. These items were designed to test elementary skills in caring for the dying and their relatives as perceived by medical undergraduates. Datasets from both groups were analysed by paired and independent two-sample t-test. The TREND statement for reporting non-randomized evaluations was applied for reporting on this quasi-experimental study. Results Three constructs showed statistically significant differences comparing the intervention group before and after. Willingness to accompany a dying patient increased from 21.40 to 37.30 (p < .001). Self-estimation of competence in communication with dying patients and their relatives increased from 12.00 to 23.60 (p = .001). Finally, self-estimation of knowledge and skills in Palliative Care increased from 8.30 to 13.20 (p = .001). Conclusions This study is a small but systematic step towards rigorous curricular development in palliative care. Our manualised curriculum is available for scrutiny and scientific feedback to support an open and constructive process of best-practice comparison in palliative care.

This is an Open Access article distributed under the terms of the Creative Commons Attribution 3.0 Unported (CC BY 3.0) License ( http://creativecommons.org/licenses/by/3.0/), which permits unrestricted use, distribution, and reproduction in any medium, provided the original work is properly cited.

KJ is part-funded by the NIHR Collaboration for Leadership in Applied Health Research and Care West Midlands.