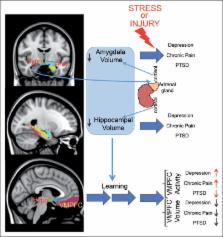 Pain and stress share significant conceptual and physiological overlaps. Both phenomena challenge the body’s homeostasis and necessitate decision-making to help animals adapt to their environment. In addition, chronic stress and chronic pain share a common behavioral model of failure to extinguish negative memories. Yet, they also have discrepancies such that the final brain endophenotype of posttraumatic stress disorder, depression, and chronic pain appears to be different among the three conditions, and the role of the hypothalamic-pituitary-adrenal axis remains unclear in the physiology of pain. Persistence of either stress or pain is maladaptive and could lead to compromised well-being. In this brief review, we highlight the commonalities and differences between chronic stress and chronic pain, while focusing particularly on the central role of the limbic brain. We assess the current attempts in the field to conceptualize and understand chronic pain, within the context of knowledge gained from the stress literature. The limbic brain—including hippocampus, amygdala, and ventromedial pre-frontal cortex—plays a critical role in learning. These brain areas integrate incoming nociceptive or stress signals with internal state, and generate learning signals necessary for decision-making. Therefore, the physiological and structural remodeling of this learning circuitry is observed in conditions such as chronic pain, depression, and posttraumatic stress disorder, and is also linked to the risk of onset of these conditions.

Brian F Gage (2000)
Neural stem cells exist not only in the developing mammalian nervous system but also in the adult nervous system of all mammalian organisms, including humans. Neural stem cells can also be derived from more primitive embryonic stem cells. The location of the adult stem cells and the brain regions to which their progeny migrate in order to differentiate remain unresolved, although the number of viable locations is limited in the adult. The mechanisms that regulate endogenous stem cells are poorly understood. Potential uses of stem cells in repair include transplantation to repair missing cells and the activation of endogenous cells to provide "self-repair. " Before the full potential of neural stem cells can be realized, we need to learn what controls their proliferation, as well as the various pathways of differentiation available to their daughter cells.

Mohammed Milad,  Gregory J. Quirk (2002)
Conditioned fear responses to a tone previously paired with a shock diminish if the tone is repeatedly presented without the shock, a process known as extinction. Since Pavlov it has been hypothesized that extinction does not erase conditioning, but forms a new memory. Destruction of the ventral medial prefrontal cortex, which consists of infralimbic and prelimbic cortices, blocks recall of fear extinction, indicating that medial prefrontal cortex might store long-term extinction memory. Here we show that infralimbic neurons recorded during fear conditioning and extinction fire to the tone only when rats are recalling extinction on the following day. Rats that froze the least showed the greatest increase in infralimbic tone responses. We also show that conditioned tones paired with brief electrical stimulation of infralimbic cortex elicit low freezing in rats that had not been extinguished. Thus, stimulation resembling extinction-induced infralimbic tone responses is able to simulate extinction memory. We suggest that consolidation of extinction learning potentiates infralimbic activity, which inhibits fear during subsequent encounters with fear stimuli.

Mohammed Milad,  Roger K. Pitman,  Cameron B. Ellis … (2009)
A clinical characteristic of posttraumatic stress disorder (PTSD) is persistently elevated fear responses to stimuli associated with the traumatic event. The objective herein is to determine whether extinction of fear responses is impaired in PTSD and whether such impairment is related to dysfunctional activation of brain regions known to be involved in fear extinction, viz., amygdala, hippocampus, ventromedial prefrontal cortex (vmPFC), and dorsal anterior cingulate cortex (dACC). Sixteen individuals diagnosed with PTSD and 15 trauma-exposed non-PTSD control subjects underwent a 2-day fear conditioning and extinction protocol in a 3-T functional magnetic resonance imaging scanner. Conditioning and extinction training were conducted on day 1. Extinction recall (or extinction memory) test was conducted on day 2 (extinguished conditioned stimuli presented in the absence of shock). Skin conductance response (SCR) was scored throughout the experiment as an index of the conditioned response. The SCR data revealed no significant differences between groups during acquisition and extinction of conditioned fear on day 1. On day 2, however, PTSD subjects showed impaired recall of extinction memory. Analysis of functional magnetic resonance imaging data showed greater amygdala activation in the PTSD group during day 1 extinction learning. During extinction recall, lesser activation in hippocampus and vmPFC and greater activation in dACC were observed in the PTSD group. The magnitude of extinction memory across all subjects was correlated with activation of hippocampus and vmPFC during extinction recall testing. These findings support the hypothesis that fear extinction is impaired in PTSD. They further suggest that dysfunctional activation in brain structures that mediate fear extinction learning, and especially its recall, underlie this impairment.

Creative Commons CC-BY: This article is distributed under the terms of the Creative Commons Attribution 4.0 License ( http://www.creativecommons.org/licenses/by/4.0/) which permits any use, reproduction and distribution of the work without further permission provided the original work is attributed as specified on the SAGE and Open Access pages ( https://us.sagepub.com/en-us/nam/open-access-at-sage).