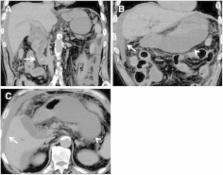 Spontaneous biliary peritonitis is rare in adults. We herein report a case of spontaneous biliary peritonitis. An 84-year-old man was admitted to our hospital for abdominal pain for 5 days. He developed fever, jaundice, and abdominal rigidity. Computed tomography (CT) revealed massive ascites in the omental bursa and around the liver. The ascites obtained by diagnostic paracentesis was dark yellow-green in color, which implied bile leakage. With a diagnosis of bile peritonitis, the patient underwent emergency exploratory laparotomy. There was massive biliary ascites in the abdominal cavity, especially in the omental bursa. Because exploration failed to demonstrate the perforation site in the gallbladder and biliary duct, we performed abdominal lavage alone. Postoperative endoscopic retrograde cholangiopancreatography showed stones in the common bile duct, and there was no evidence of biliary leakage. Endoscopic retrograde biliary drainage was performed using a plastic stent to reduce the pressure of the common bile duct. After the operation, the patient showed satisfactory recovery and started oral intake on postoperative day 8. However, the patient developed heart failure due to renal dysfunction with nephrotic syndrome at 1 month after the operation. With a diagnosis of rapidly progressive glomerulonephritis due to immune complex, the patient received steroid treatment for nephritis, diuretics, and carperitide for heart failure. Although heart failure and renal dysfunction improved by these treatment, the patients developed toxic epidermal necrolysis which was refractory to intensive treatments including steroid pulse and immunoglobulin, and the patient died 76 days after the operation.

Nontraumatic perforation of the bile duct in adults.

Spontaneous biliary tract perforations: an unusual cause of peritonitis in pregnancy. Report of two cases and review of literature

Nikhil Talwar, Manoj Andley, Bina Ravi … (2006)
Spontaneous perforations of the biliary tract are rare in adults and even more so during pregnancy. Perforation of the gall bladder is a potentially fatal complication of cholecystitis. The infrequency of perforation in the setting of calculous disease of the gall bladder is probably due to the thickened wall of the organ that has long been the seat of chronic inflammation. Common bile duct perforations have been reported in adults most commonly in association with choledocholithiasis. The diagnosis of biliary tract perforations is often delayed due to their non specific symptoms, which results in high morbidity. Early diagnosis and aggressive therapy are mandatory to alleviate this condition. Delayed diagnoses and treatment may have more serious consequences for pregnant women than for other patients. Very few cases of biliary tract perforations have been reported in pregnant women. We report two such cases in pregnancy: first of a gall bladder perforation associated with cholelithiasis and the second of a common bile duct perforation in pregnancy in which no apparent cause was found.

Clinicopathological analysis of idiopathic perforation of the gallbladder.

Ken Okamoto, Michiya Kobayashi, Tsutomu Namikawa … (2006)
Idiopathic perforation of the gallbladder (IPGB) is a rare event, and the underlying mechanisms are unknown. We investigated the clinicopathological characteristics of this disorder. We reported a case of IPGB, and reviewed 30 other cases reported up to the end of 2005 in a Medline and Japan Centra Revuo Medicina search of the medical literature. We analyzed the clinical findings, laboratory data, and histopathological features. The mean age of the patients was 70.2 +/- 12.8 years, and there were 19 men and 12 women. Underlying diseases such as hypertension, cerebral infarction or hemorrhage, renal failure, respiratory failure, and malignancy were reported in 35.5% of the patients. Perforation was found more often in the fundus (53.3%) than in the body (43.3%) or neck (3.3%) of the gallbladder. Thrombus was found in the intramural vessels of the gallbladder wall in 13 patients (50%), whereas 13 (50%) were free of thrombus. Serum amylase was significantly higher in the intramural vessels in the thrombus-negative group than in the thrombus-positive group. The overall operative mortality was 3.3%. Univariate and multivariate analyses indicated that a delay of more than 24 h from the manifestation of symptoms to operation and a perforation size greater than 2 cm required significantly longer hospitalization. Thrombosis in the intramural vessels seems to be related to the events leading to IPGB; however, it is difficult to consider it the only cause. Early operation and the size of the perforation are important determinants of the outcome of treatment for IPGB.