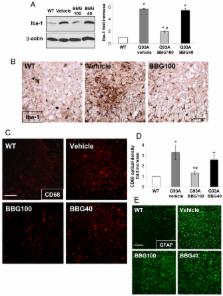 Publisher: The Company of Biologists Limited

In recent years there has been an increasing awareness of the role of P2X7, a receptor for extracellular ATP, in modulating physiopathological mechanisms in the central nervous system. In particular, P2X7 has been shown to be implicated in neuropsychiatry, chronic pain, neurodegeneration and neuroinflammation. Remarkably, P2X7 has also been shown to be a ‘gene modifier’ in amyotrophic lateral sclerosis (ALS): the receptor is upregulated in spinal cord microglia in human and rat at advanced stages of the disease; in vitro, activation of P2X7 exacerbates pro-inflammatory responses in microglia that have an ALS phenotype, as well as toxicity towards neuronal cells. Despite this detrimental in vitro role of P2X7, in SOD1-G93A mice lacking P2X7, the clinical onset of ALS was significantly accelerated and disease progression worsened, thus indicating that the receptor might have some beneficial effects, at least at certain stages of disease. In order to clarify this dual action of P2X7 in ALS pathogenesis, in the present work we used the antagonist Brilliant Blue G (BBG), a blood-brain barrier permeable and safe drug that has already been proven to reduce neuroinflammation in traumatic brain injury, cerebral ischemia-reperfusion, neuropathic pain and experimental autoimmune encephalitis. We tested BBG in the SOD1-G93A ALS mouse model at asymptomatic, pre-symptomatic and late pre-symptomatic phases of disease. BBG at late pre-onset significantly enhanced motor neuron survival and reduced microgliosis in lumbar spinal cord, modulating inflammatory markers such as NF-κB, NADPH oxidase 2, interleukin-1β, interleukin-10 and brain-derived neurotrophic factor. This was accompanied by delayed onset and improved general conditions and motor performance, in both male and female mice, although survival appeared unaffected. Our results prove the twofold role of P2X7 in the course of ALS and establish that P2X7 modulation might represent a promising therapeutic strategy by interfering with the neuroinflammatory component of the disease.

Alexei Verkhratsky,  Uwe-Karsten Hanisch,  Helmut Kettenmann … (2011)
Microglial cells are the resident macrophages in the central nervous system. These cells of mesodermal/mesenchymal origin migrate into all regions of the central nervous system, disseminate through the brain parenchyma, and acquire a specific ramified morphological phenotype termed "resting microglia." Recent studies indicate that even in the normal brain, microglia have highly motile processes by which they scan their territorial domains. By a large number of signaling pathways they can communicate with macroglial cells and neurons and with cells of the immune system. Likewise, microglial cells express receptors classically described for brain-specific communication such as neurotransmitter receptors and those first discovered as immune cell-specific such as for cytokines. Microglial cells are considered the most susceptible sensors of brain pathology. Upon any detection of signs for brain lesions or nervous system dysfunction, microglial cells undergo a complex, multistage activation process that converts them into the "activated microglial cell." This cell form has the capacity to release a large number of substances that can act detrimental or beneficial for the surrounding cells. Activated microglial cells can migrate to the site of injury, proliferate, and phagocytose cells and cellular compartments.

NF-kappaB regulation in the immune system.

Qiutang Li,  Inder Verma (2002)
The nuclear factor-kappaB (NF-kappaB)/REL family of transcription factors has a central role in coordinating the expression of a wide variety of genes that control immune responses. There has been intense scientific activity in the NF-kappaB field owing to the involvement of these factors in the activation and regulation of key molecules that are associated with diseases ranging from inflammation to cancer. In this review, we focus on our current understanding of NF-kappaB regulation and its role in the immune system and inflammatory diseases. We also discuss the role of NF-kappaB proteins as potential therapeutic targets in clinical applications.

Helmut Kettenmann,  Alexei Verkhratsky,  Frank Kirchhoff (2013)
Any pathologic event in the brain leads to the activation of microglia, the immunocompetent cells of the central nervous system. In recent decades diverse molecular pathways have been identified by which microglial activation is controlled and by which the activated microglia affects neurons. In the normal brain microglia were considered "resting," but it has recently become evident that they constantly scan the brain environment and contact synapses. Activated microglia can remove damaged cells as well as dysfunctional synapses, a process termed "synaptic stripping." Here we summarize evidence that molecular pathways characterized in pathology are also utilized by microglia in the normal and developing brain to influence synaptic development and connectivity, and therefore should become targets of future research. Microglial dysfunction results in behavioral deficits, indicating that microglia are essential for proper brain function. This defines a new role for microglia beyond being a mere pathologic sensor. Copyright © 2013 Elsevier Inc. All rights reserved.