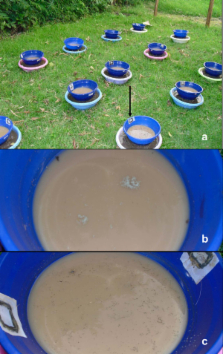 The entomopathogenic fungi Metarhizium anisopliae and Beauveria bassiana have demonstrated effectiveness against anopheline larvae in the laboratory. However, utilising these fungi for the control of anopheline larvae under field conditions, relies on development of effective means of application as well as reducing their sensitivity to UV radiation, high temperatures and the inevitable contact with water. This study was conducted to develop formulations that facilitate the application of Metarhizium anisopliae and Beauveria bassiana spores for the control of anopheline larvae, and also improve their persistence under field conditions.

Laboratory bioassays were conducted to test the ability of aqueous (0.1% Tween 80), dry (organic and inorganic) and oil (mineral and synthetic) formulations to facilitate the spread of fungal spores over the water surface and improve the efficacy of formulated spores against anopheline larvae as well as improve spore survival after application. Field bioassays were then carried out to test the efficacy of the most promising formulation under field conditions in western Kenya.

When formulated in a synthetic oil (ShellSol T), fungal spores of both Metarhizium anisopliae and Beauveria bassiana were easy to mix and apply to the water surface. This formulation was more effective against anopheline larvae than 0.1% Tween 80, dry powders or mineral oil formulations. ShellSol T also improved the persistence of fungal spores after application to the water. Under field conditions in Kenya, the percentage pupation of An. gambiae was significantly reduced by 39 - 50% by the ShellSol T-formulated Metarhizium anisopliae and Beauveria bassiana spores as compared to the effects of the application of unformulated spores.

ShellSol T is an effective carrier for fungal spores when targeting anopheline larvae under both laboratory and field conditions. Entomopathogenic fungi formulated with a suitable carrier are a promising tool for control of larval populations of malaria mosquitoes. Additional studies are required to identify the best delivery method (where, when and how) to make use of the entomopathogenic potential of these fungi against anopheline larvae.

An entomopathogenic fungus for control of adult African malaria mosquitoes.

Eradication of Anopheles gambiae from Brazil: lessons for malaria control in Africa?

Gerry F. Killeen,  Ulrike Fillinger,  Ibrahim Kiche … (2002)
Current malaria-control strategies emphasise domestic protection against adult mosquitoes with insecticides, and improved access to medical services. Malaria prevention by killing adult mosquitoes is generally favoured because moderately reducing their longevity can radically suppress community-level transmission. By comparison, controlling larvae has a less dramatic effect at any given level of coverage and is often more difficult to implement. Nevertheless, the historically most effective campaign against African vectors is the eradication of accidentally introduced Anopheles gambiae from 54000 km(2) of largely ideal habitat in northeast Brazil in the 1930s and early 1940s. This outstanding success was achieved through an integrated programme but relied overwhelmingly upon larval control. This experience was soon repeated in Egypt and another larval control programme successfully suppressed malaria for over 20 years around a Zambian copper mine. These affordable approaches were neglected after the advent of dichlorodiphenyl trichloroethane (DDT) and global malaria-control policy shifted toward domestic adulticide methods. Larval-control methods should now be re-prioritised for research, development, and implementation as an additional way to roll back malaria.

Ulrike Fillinger,  Bryson Ndenga,  Andrew K. Githeko … (2009)
OBJECTIVE: To assess the contributions of both microbial larvicides and insecticide-treated nets (ITNs) in terms of reducing malaria incidence in an integrated vector management programme in an area moderately endemic for malaria in the western Kenyan highlands. METHODS: A pre-post, control group design was used. Larval and adult vector populations were surveyed weekly in six separate valley communities. The incidence of Plasmodium infections in children 6 months to 13 years of age was measured during the long and short rainy seasons each year. Baseline data were collected for 17 months, after which Bacillus-based larvicides were applied weekly to aquatic habitats in three of the valleys for another 19 months. At around the same time the larviciding was initiated, ITNs were introduced gradually into all study communities by the National Malaria Control Programme. The effect of larviciding, ITNs and other determinants of malaria risk was assessed by means of generalized estimating equations. FINDINGS: The risk of acquiring new parasite infections in children was substantially and independently reduced by ITN use (odds ratio, OR: 0.69; 95% confidence interval, CI: 0.48-0.99) and larvicide application (OR: 0.44; 95% CI: 0.23-0.82), after adjusting for confounders. CONCLUSION: Vector control with microbial larvicides enhanced the malaria control achieved with ITNs alone. Anti-larval measures are a promising complement to ITN distribution in the economically important highland areas and similar transmission settings in Africa.