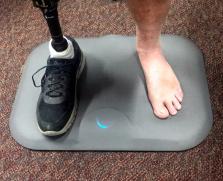 Daily remote foot temperature monitoring is an evidence-based preventive practice for patients at risk for diabetic foot complications. Unfortunately, the conventional approach requires comparison of temperatures between contralaterally matched anatomy, limiting practice in high-risk cohorts such as patients with a wound to one foot and those with proximal lower extremity amputation (LEA). We developed and assessed a novel approach for monitoring of a single foot for the prevention and early detection of diabetic foot complications. The purpose of this study was to assess the sensitivity, specificity, and lead time associated with unilateral diabetic foot temperature monitoring.

We used comparisons among ipsilateral foot temperatures and between foot temperatures and ambient temperature as a marker of inflammation. We analyzed data collected from a 129-participant longitudinal study to evaluate the predictive accuracy of our approach. To evaluate classification accuracy, we constructed a receiver operator characteristic curve and reported sensitivity, specificity, and lead time for four different monitoring settings.

Using this approach, monitoring a single foot was found to predict 91% of impending non-acute plantar foot ulcers on average 41 days before clinical presentation with a resultant mean 4.2 alerts per participant-year. By adjusting the threshold temperature setting, the specificity could be increased to 78% with corresponding reduced sensitivity of 53%, lead time of 33 days, and 2.2 alerts per participant-year.

Given the high incidence of subsequent diabetic foot complications to the sound foot in patients with a history of proximal LEA and patients being treated for a wound, practice of daily temperature monitoring of a single foot has the potential to significantly improve outcomes and reduce resource utilization in this challenging high-risk population.

Burden of diabetic foot ulcers for medicare and private insurers.

Effects of temperature on neuromuscular electrophysiology.

Seward B. Rutkove (2001)
Like nearly all biologic structures, the peripheral nervous system is remarkably temperature sensitive. Clinical neurophysiologists are most aware of the untoward effects of cooling on nerve conduction studies, including reduced conduction velocity, prolonged distal latency, and increased response amplitude and duration. However, familiarity with the effects of temperature variation on the peripheral nervous system can also provide a deeper understanding of the physiological mechanisms underlying the function of nerve, muscle, and neuromuscular junction in health and disease. Intentional temperature alteration can also improve the diagnostic accuracy of certain electrophysiologic tests, such as the use of heat when performing repetitive nerve stimulation in myasthenia gravis or the use of cold during needle electromyography in some of the myotonic disorders. Finally, extremes of temperature have long been known to produce permanent neuronal dysfunction; recent investigations are beginning to elucidate the mechanisms of such injury. Copyright 2001 American Association of Electrodiagnostic Medicine

An evaluation of the efficacy of methods used in screening for lower-limb arterial disease in diabetes.

Patricia Price,  Keith G. Harding,  T. Williams (2005)
Foot-related disease is the most common cause for hospital admission among the diabetic population. Lower-limb peripheral arterial occlusive disease (PAOD) is a major risk factor in diabetic foot disease. Screening for PAOD commonly includes foot pulses and the ankle-brachial pressure index (ABPI) and/or the toe-brachial pressure index (TBI), but concerns persist regarding their accuracy. We evaluated the efficacy of several commonly used screening methods in different subject populations. We studied 130 limbs in 68 individuals with no critical ischemia over 8 months. Limbs were grouped on the basis of the presence or absence of diabetes, clinically detectable peripheral neuropathy, and PAOD identified on color duplex imaging. Comparative analyses of foot pulses, the ABPI, the TBI, and distal Doppler waveform analysis were performed. Foot pulses, the TBI, and qualitative waveform analyses were highly sensitive screening methods in individuals with and without diabetes. However, detectable peripheral neuropathy was associated with a reduced sensitivity and poor specificity of foot pulses, a reduction in sensitivity of the ABPI (71 to 38%), and a reduction in specificity of the TBI (81 to 61%) and qualitative waveform analysis (96 to 66%). Quantitative analysis failed to detect disease with severely damped and low-intensity signals. Screening tools that are effective in screening for lower-limb PAOD in the nondiabetic population are less efficacious in diabetes, particularly in the presence of detectable peripheral neuropathy. Qualitative waveform analysis and the TBI were demonstrated to be more effective screening methods than the ABPI and foot pulses particularly in high-risk limbs with detectable peripheral neuropathy.