The PRISMA statement for reporting systematic reviews and meta-analyses of studies that evaluate healthcare interventions: explanation and elaboration 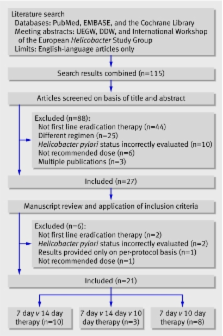 Systematic reviews and meta-analyses are essential to summarise evidence relating to efficacy and safety of healthcare interventions accurately and reliably. The clarity and transparency of these reports, however, are not optimal. Poor reporting of systematic reviews diminishes their value to clinicians, policy makers, and other users.

The PRISMA statement consists of a 27-item checklist and a four-phase flow diagram. The checklist includes items deemed essential for transparent reporting of a systematic review. In this explanation and elaboration document, we explain the meaning and rationale for each checklist item. For each item, we include an example of good reporting and, where possible, references to relevant empirical studies and methodological literature. The PRISMA statement, this document, and the associated website (www.prisma-statement.org/) should be helpful resources to improve reporting of systematic reviews and meta-analyses.

Joshua Davis,  Vincent He,  Nicholas Anstey … (2014)
Background Sepsis is a leading cause of death in intensive care units and is increasing in incidence. Current trials of novel therapeutic approaches for sepsis focus on 28-day mortality as the primary outcome measure, but excess mortality may extend well beyond this time period. Methods We used relative survival analysis to examine excess mortality in a cohort of 1,028 patients admitted to a tertiary referral hospital with sepsis during 2007–2008, over the first 5 years of follow up. Expected survival was estimated using the Ederer II method, using Australian life tables as the reference population. Cumulative and interval specific relative survival were estimated by age group, sex, sepsis severity and Indigenous status. Results Patients were followed for a median of 4.5 years (range 0–5.2). Of the 1028 patients, the mean age was 46.9 years, 52% were male, 228 (22.2%) had severe sepsis and 218 (21%) died during the follow up period. Mortality based on cumulative relative survival exceeded that of the reference population for the first 2 years post admission in the whole cohort and for the first 3 years in the subgroup with severe sepsis. Independent predictors of mortality over the whole follow up period were male sex, Indigenous Australian ethnicity, older age, higher Charlson Comorbidity Index, and sepsis-related organ dysfunction at presentation. Conclusions The mortality rate of patients hospitalised with sepsis exceeds that of the general population until 2 years post admission. Efforts to improve outcomes from sepsis should examine longer term outcomes than the traditional primary endpoints of 28-day and 90-day mortality.

Outcomes in Patients with Acute and Stable Coronary Syndromes; Insights from the Prospective NOBORI-2 Study