Sulodexide therapy for the treatment of diabetic nephropathy, a meta-analysis and literature review 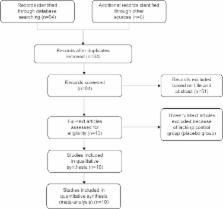 Sulodexide is a heterogeneous group of sulfated glycosaminoglycans (GAGs) that is mainly composed of low-molecular-weight heparin. Clinical studies have demonstrated that sulodexide is capable of reducing urinary albumin excretion rates in patients with type 1 and type 2 diabetes, suggesting that sulodexide has renal protection. However, this efficacy remains inconclusive. In this article, we used meta-analysis to summarize the clinical results of all prospective clinical studies in order to determine the clinical efficacy and safety of sulodexide in diabetic patients with nephropathy. Overall, sulodexide therapy was associated with a significant reduction in urinary protein excretion. In the sulodexide group, 220 (17.7%) achieved at least a 50% decrease in albumin excretion rate compared with only 141 (11.5%) in the placebo. The odds ratio comparing proportions of patients with therapeutic success between the sulodexide and placebo groups was 3.28 (95% confidence interval, 1.34–8.06; P=0.01). These data suggest a renoprotective benefit of sulodexide in patients with diabetes and micro- and macroalbuminuria, which will provide important information for clinical use of this drug as a potential modality for diabetic nephropathy, specifically, the prevention of end-stage renal disease that is often caused by diabetes.

Meta-analysis: effect of monotherapy and combination therapy with inhibitors of the renin angiotensin system on proteinuria in renal disease.

Jan O Friedrich,  Neill KJ Adhikari,  Joseph Beyene (2007)
Background Meta-analysis handles randomized trials with no outcome events in both treatment and control arms inconsistently, including them when risk difference (RD) is the effect measure but excluding them when relative risk (RR) or odds ratio (OR) are used. This study examined the influence of such trials on pooled treatment effects. Methods Analysis with and without zero total event trials of three illustrative published meta-analyses with a range of proportions of zero total event trials, treatment effects, and heterogeneity using inverse variance weighting and random effects that incorporates between-study heterogeneity. Results Including zero total event trials in meta-analyses moves the pooled estimate of treatment effect closer to nil, decreases its confidence interval and decreases between-study heterogeneity. For RR and OR, inclusion of such trials causes small changes, even when they comprise the large majority of included trials. For RD, the changes are more substantial, and in extreme cases can eliminate a statistically significant effect estimate. Conclusion To include all relevant data regardless of effect measure chosen, reviewers should also include zero total event trials when calculating pooled estimates using OR and RR.

Margaret Herridge,  Jan O Friedrich,  Joseph Beyene … (2005)
Surveys have documented the continued popularity of low-dose dopamine to influence renal dysfunction even though few data support it and editorials and reviews have discouraged its use. To evaluate the effects of low-dose dopamine (< or =5 microg/kg of body weight per minute) compared with placebo or no therapy in patients with or at risk for acute renal failure. MEDLINE (1966-January 2005), EMBASE (1980-week 5, 2005), CANCERLIT (1975-2002), CINAHL (1982-January 2005), and CENTRAL (The Cochrane Library, fourth quarter, 2004); bibliographies of retrieved publications; and additional information from 50 trials. Two reviewers independently selected parallel-group randomized and quasi-randomized controlled trials of low-dose dopamine versus control. Study methods, clinical and renal physiologic outcomes, and adverse events (arrhythmias and myocardial, limb, and cutaneous ischemia) were extracted. 61 trials that randomly assigned 3359 patients were identified. Meta-analyses using random-effects models showed no effect of low-dose dopamine on mortality (relative risk, 0.96 [95% CI, 0.78 to 1.19]), need for renal replacement therapy (relative risk, 0.93 [CI, 0.76 to 1.15]), or adverse events (relative risk, 1.13 [CI, 0.90 to 1.41]). Low-dose dopamine increased urine output by 24% (CI, 14% to 35%) on day 1. Improvements in serum creatinine level (4% relative decrease [CI, 1% to 7%]) and measured creatinine clearance (6% relative increase [CI, 1% to 11%]) on day 1 were clinically insignificant. There were no significant changes on days 2 and 3 of therapy. Statistically significant between-study heterogeneity in physiologic but not clinical outcomes was unexplained by prespecified hypotheses. Low-dose dopamine offers transient improvements in renal physiology, but no good evidence shows that it offers important clinical benefits to patients with or at risk for acute renal failure.