Dexmedetomidine protects the developing rat brain against the neurotoxicity wrought by sevoflurane: role of autophagy and Drp1–Bax signaling 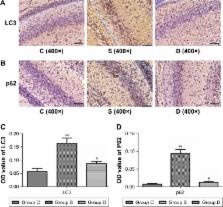 Pregnant rats on gestational day 20 were exposed to 3% sevoflurane for 4 hours. Saline and dexmedetomidine were injected intraperitoneally 15 minutes before exposure to sevoflurane or control gas. Bilateral hippocampi were harvested on postnatal day 1. Hippocampal morphology was observed by Nissl staining and expression of the microtubule-related protein LC3I/II, p62, Drp1, Bax, and Bcl2 were evaluated by Western blotting and immunohistochemistry.

Nissl staining showed that sevoflurane anesthesia during the third trimester caused neuronal damage to the hippocampi of rat pups. Western blotting and immunohistochemistry showed that pregnant rats exposed to sevoflurane during the third trimester led to pups having increased expression of LC3 and p62, suggesting that sevoflurane blocked autophagic flow in the hippocampus. Expression of Drp1 and Bax was increased after sevoflurane exposure, whereas Bcl2 expression was downregulated. All these effects were alleviated by pretreatment with dexmedetomidine.

Sevoflurane exposure during the third trimester caused neurological injury to rat pups. Autophagy and abnormalities in mitochondrial dynamics were involved in this neurotoxic process and were antagonized by dexmedetomidine.

Philippe Parrone,  Dominic James Farris,  Rodrigue Rossignol … (2007)
Mitochondria form a dynamic network, and it remains unclear how the alternate configurations interact with bioenergetics properties. The metabolic signals that link mitochondrial structure to its functional states have not been fully characterized. In this report, we analyze the bidirectional relationships between mitochondrial morphology and function in living human cells. First, we determined the effect of mitochondrial fission on energy production by using small interfering RNA (siRNA) targeting DRP1, which revealed the importance of membrane fluidity on the control of bioenergetics. Second, we followed the effect of rotenone, a specific inhibitor of respiratory chain complex I, which causes large structural perturbations, once a threshold was reached. Last, we followed changes in the mitochondrial network configuration in human cells that had been treated with modulators of oxidative phosphorylation, and in fibroblasts from two patients with mitochondrial disease where the respiratory rate, DeltaPsi and the generation of reactive oxygen species (ROS) were measured. Our data demonstrate that the relationship between mitochondrial network organization and bioenergetics is bidirectional, and we provide a model for analyzing the metabolic signals involved in this crosstalk.

Ella Bossy-Wetzel,  Paolo Meda,  S Herzig … (2010)
In response to many apoptotic stimuli, oligomerization of Bax is essential for mitochondrial outer membrane permeabilization and the ensuing release of cytochrome c. These events are accompanied by mitochondrial fission that appears to require Drp1, a large GTPase of the dynamin superfamily. Loss of Drp1 leads to decreased cytochrome c release by a mechanism that is poorly understood. Here we show that Drp1 stimulates tBid-induced Bax oligomerization and cytochrome c release by promoting tethering and hemifusion of membranes in vitro. This function of Drp1 is independent of its GTPase activity and relies on arginine 247 and the presence of cardiolipin in membranes. In cells, overexpression of Drp1 R247A/E delays Bax oligomerization and cell death. Our findings uncover a function of Drp1 and provide insight into the mechanism of Bax oligomerization. Copyright © 2010 Elsevier Inc. All rights reserved.

Sangita Sinha,  Guido Kroemer,  Beth Levine (2008)
The essential autophagy protein and haplo-insufficient tumor suppressor, Beclin 1, interacts with several cofactors (Ambra1, Bif-1, UVRAG) to activate the lipid kinase Vps34, thereby inducing autophagy. In normal conditions, Beclin 1 is bound to and inhibited by Bcl-2 or the Bcl-2 homolog Bcl-X(L). This interaction involves a Bcl-2 homology 3 (BH3) domain in Beclin 1 and the BH3 binding groove of Bcl-2/Bcl-X(L). Other proteins containing BH3 domains, called BH3-only proteins, can competitively disrupt the interaction between Beclin 1 and Bcl-2/Bcl-X(L) to induce autophagy. Nutrient starvation, which is a potent physiologic inducer of autophagy, can stimulate the dissociation of Beclin 1 from its inhibitors, either by activating BH3-only proteins (such as Bad) or by posttranslational modifications of Bcl-2 (such as phosphorylation) that may reduce its affinity for Beclin 1 and BH3-only proteins. Thus, anti-apoptotic Bcl-2 family members and pro-apoptotic BH3-only proteins may participate in the inhibition and induction of autophagy, respectively. This hitherto neglected crosstalk between the core machineries regulating autophagy and apoptosis may redefine the role of Bcl-2 family proteins in oncogenesis and tumor progression.