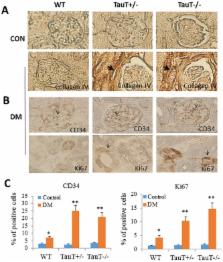 Diabetic nephropathy is the leading cause of end stage renal disease in the world. Although tremendous efforts have been made, scientists have yet to identify an ideal animal model that can reproduce the characteristics of human diabetic nephropathy. In this study, we hypothesize that taurine insufficiency is a critical risk factor for development of diabetic nephropathy associated with diabetes mellitus. This hypothesis was tested in vivo in TauT heterozygous ( TauT +/-) and homozygous ( TauT -/- ) knockout in C57BL/6 background mice. We have shown that alteration of the TauT gene (also known as SLC6A6) has a substantial effect on the susceptibility to development of extensive diabetic kidney disease in both TauT +/- and TauT -/- mouse models of diabetes. These animals developed histological changes characteristic of human diabetic nephropathy that included glomerulosclerosis, nodular lesions, arteriosclerosis, arteriolar dilation, and tubulointerstitial fibrosis. Immunohistochemical staining of molecular markers of smooth muscle actin, CD34, Ki67 and collagen IV further confirmed these observations. Our results demonstrated that both homozygous and heterozygous TauT gene deletion predispose C57BL/6 mice to develop end-stage diabetic kidney disease, which closely replicates the pathological features of diabetic nephropathy in human diabetic patients.

Takamune Takahashi,  Moshe Levi,  Matthew Breyer … (2009)
Diabetic nephropathy is a major cause of ESRD worldwide. Despite its prevalence, a lack of reliable animal models that mimic human disease has delayed the identification of specific factors that cause or predict diabetic nephropathy. The Animal Models of Diabetic Complications Consortium (AMDCC) was created in 2001 by the National Institutes of Health to develop and characterize models of diabetic nephropathy and other complications. This interim report and our online supplement detail the progress made toward that goal, specifically in the development and testing of murine models. Updates are provided on validation criteria for early and advanced diabetic nephropathy, phenotyping methods, the effect of background strain on nephropathy, current best models of diabetic nephropathy, negative models, and views of future directions. AMDCC investigators and other investigators in the field have yet to validate a complete murine model of human diabetic kidney disease. Nonetheless, the critical analysis of existing murine models substantially enhances our understanding of this disease process.

M Jane Heinig,  Ralph Clarke,  Byron P. Croker … (2007)
The pathogenesis of diabetic nephropathy remains poorly defined, and animal models that represent the human disease have been lacking. It was demonstrated recently that the severe endothelial dysfunction that accompanies a diabetic state may cause an uncoupling of the vascular endothelial growth factor (VEGF)-endothelial nitric oxide (eNO) axis, resulting in increased levels of VEGF and excessive endothelial cell proliferation. It was hypothesized further that VEGF-NO uncoupling could be a major contributory mechanism that leads to diabetic vasculopathy. For testing of this hypothesis, diabetes was induced in eNO synthase knockout mice (eNOS KO) and C57BL6 controls. Diabetic eNOS KO mice developed hypertension, albuminuria, and renal insufficiency with arteriolar hyalinosis, mesangial matrix expansion, mesangiolysis with microaneurysms, and Kimmelstiel-Wilson nodules. Glomerular and peritubular capillaries were increased with endothelial proliferation and VEGF expression. Diabetic eNOS KO mice showed increased mortality at 5 mo. All of the functional and histologic changes were improved with insulin therapy. Inhibition of eNO predisposes mice to classic diabetic nephropathy. The mechanism likely is due to VEGF-NO uncoupling with excessive endothelial cell proliferation coupled with altered autoregulation consequent to the development of preglomerular arteriolar disease. Endothelial dysfunction in human diabetes is common, secondary to effects of glucose, advanced glycation end products, C-reactive protein, uric acid, and oxidants. It was postulated that endothelial dysfunction should predict nephropathy and that correction of the dysfunction may prevent these important complications.

Characterization of susceptibility of inbred mouse strains to diabetic nephropathy.

Robert Z. Qi,  Matthew Breyer,  Jianping Jin … (2005)
Differential susceptibility to diabetic nephropathy has been observed in humans, but it has not been well defined in inbred strains of mice. The present studies characterized the severity of diabetic nephropathy in six inbred mouse strains including C57BL/6J, DBA/2J, FVB/NJ, MRL/MpJ, A/J, and KK/HlJ mice. Diabetes mellitus was induced using low-dose streptozotocin injection. Progression of renal injury was evaluated by serial measurements of urinary albumin excretion, glomerular filtration rate (GFR), and terminal assessment of renal morphology over 25 weeks. Despite comparable levels of hyperglycemia, urinary albumin excretion and renal histopathological changes were dramatically different among strains. DBA/2J and KK/HlJ mice developed significantly more albuminuria than C57BL/6J, MRL/MpJ, and A/J mice. Severe glomerular mesangial expansion, nodular glomerulosclerosis, and arteriolar hyalinosis were observed in diabetic DBA/2J and KK/HlJ mice. Glomerular hyperfiltration was observed in all diabetic strains studied except A/J. The significant decline in GFR was not evident over the 25-week period of study, but diabetic DBA/2J mice exhibited a tendency for GFR to decline. Taken together, these results indicate that differential susceptibility to diabetic nephropathy exists in inbred mice. DBA/2J and KK/HlJ mice are more prone to diabetic nephropathy, whereas the most widely used C57BL/6J mice are relatively resistant to development of diabetic nephropathy.

Data Availability All relevant data are within the paper and its Supporting Information files. Any additional data may be obtained from Dr. Han at the Department of Medicine-Nephrology University of Tennessee Health Science Center ( xhan@ 123456uthsc.edu ).
Data availability:
ScienceOpen disciplines: Uncategorized