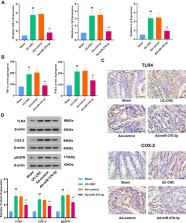 Ulcerative colitis (UC) is a chronic and inflammatory bowel disease. UC-associated colorectal cancer (UC-CRC) is one of the most severe complications of long-standing UC. In the present study, we explored the effects of miR-370-3p on UC-CRC in vivo and investigated its underlying mechanisms in vivo and in vitro.

Taken together, miR-370-3p alleviated UC-CRC by inhibiting the inflammatory response and EMT in mice, which suggested miR-370-3p as a novel potential target for UC-CRC therapy.

Recognition of commensal microflora by toll-like receptors is required for intestinal homeostasis.

Seth Rakoff-Nahoum,  Justin Paglino,  Stephen Edberg … (2004)
Toll-like receptors (TLRs) play a crucial role in host defense against microbial infection. The microbial ligands recognized by TLRs are not unique to pathogens, however, and are produced by both pathogenic and commensal microorganisms. It is thought that an inflammatory response to commensal bacteria is avoided due to sequestration of microflora by surface epithelia. Here, we show that commensal bacteria are recognized by TLRs under normal steady-state conditions, and this interaction plays a crucial role in the maintenance of intestinal epithelial homeostasis. Furthermore, we find that activation of TLRs by commensal microflora is critical for the protection against gut injury and associated mortality. These findings reveal a novel function of TLRs-control of intestinal epithelial homeostasis and protection from injury-and provide a new perspective on the evolution of host-microbial interactions.

MicroRNAs in cancer: small molecules with a huge impact.

Carlo Croce,  V Iorio (2009)
Every cellular process is likely to be regulated by microRNAs, and an aberrant microRNA expression signature is a hallmark of several diseases, including cancer. MicroRNA expression profiling has indeed provided evidence of the association of these tiny molecules with tumor development and progression. An increasing number of studies have then demonstrated that microRNAs can function as potential oncogenes or oncosuppressor genes, depending on the cellular context and on the target genes they regulate. Here we review our current knowledge about the involvement of microRNAs in cancer and their potential as diagnostic, prognostic, and therapeutic tools.