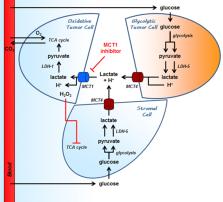 Tumors are highly plastic metabolic entities composed of cancer and host cells that can adopt different metabolic phenotypes. For energy production, cancer cells may use 4 main fuels that are shuttled in 5 different metabolic pathways. Glucose fuels glycolysis that can be coupled to the tricarboxylic acid (TCA) cycle and oxidative phosphorylation (OXPHOS) in oxidative cancer cells or to lactic fermentation in proliferating and in hypoxic cancer cells. Lipids fuel lipolysis, glutamine fuels glutaminolysis, and lactate fuels the oxidative pathway of lactate, all of which are coupled to the TCA cycle and OXPHOS for energy production. This review focuses on the latter metabolic pathway.

Lactate, which is prominently produced by glycolytic cells in tumors, was only recently recognized as a major fuel for oxidative cancer cells and as a signaling agent. Its exchanges across membranes are gated by monocarboxylate transporters MCT1-4. This review summarizes the current knowledge about MCT structure, regulation and functions in cancer, with a specific focus on lactate metabolism, lactate-induced angiogenesis and MCT-dependent cancer metastasis. It also describes lactate signaling via cell surface lactate receptor GPR81.

Lactate and MCTs, especially MCT1 and MCT4, are important contributors to tumor aggressiveness. Analyses of MCT-deficient (MCT +/- and MCT −/-) animals and (MCT-mutated) humans indicate that they are druggable, with MCT1 inhibitors being in advanced development phase and MCT4 inhibitors still in the discovery phase. Imaging lactate fluxes non-invasively using a lactate tracer for positron emission tomography would further help to identify responders to the treatments.

The plasma membrane lactate transporter MCT4, but not MCT1, is up-regulated by hypoxia through a HIF-1alpha-dependent mechanism.

S. Ullah,  Kelvin J A Davies,  Andrew P. Halestrap (2006)
The monocarboxylate transporter MCT4 mediates lactic acid efflux from most tissues that are dependent on glycolysis for their ATP production. Here we demonstrate that expression of MCT4 mRNA and protein was increased >3-fold by a 48-h exposure to 1% O(2), whereas MCT1 expression was not increased. The effect was mimicked by CoCl(2) (50 microm), suggesting transcriptional regulation by hypoxia-inducible factor 1alpha (HIF-1alpha). The predicted promoters for human MCT1, MCT2, and MCT4 were cloned into the pGL3 vector and shown to be active (luciferase luminescence) under basal conditions. Only the MCT4 promoter was activated (>2-fold) by hypoxia. No response was found in cells lacking HIF-1alpha. Four potential hypoxia-response elements were identified, but deletion analysis implicated only two in the hypoxia response. These were just upstream from the transcription start site and also found in the mouse MCT4 promoter. Mutation of site 2 totally abolished the hypoxic response, whereas mutation of site 1 only reduced the response. Gel-shift analysis demonstrated that nuclear extracts of hypoxic but not normoxic HeLa cells contained two transcription factors that bound to DNA probes containing these hypoxia-response elements. The major shifted band was abolished by mutation of site 2, and supershift analysis confirmed that HIF-1alpha bound to this site. Binding of the second factor was abolished by mutation of site 1. We conclude that MCT4, like other glycolytic enzymes, is up-regulated by hypoxia through a HIF-1alpha-mediated mechanism. This adaptive response allows the increased lactic acid produced during hypoxia to be rapidly lost from the cell.