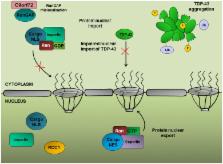 A large GGGGCC hexanucleotide repeat expansion in the first intron or promoter region of the C9orf72 gene is the most common genetic cause of familial and sporadic Amyotrophic lateral sclerosis (ALS), a devastating degenerative disease of motor neurons, and of Frontotemporal Dementia (FTD), the second most common form of presenile dementia after Alzheimer’s disease. C9orf72-associated ALS/FTD is a multifaceted disease both in terms of its clinical presentation and the misregulated cellular pathways contributing to disease progression. Among the numerous pathways misregulated in C9orf72-associated ALS/FTD, altered RNA processing has consistently appeared at the forefront of C9orf72 research. This includes bidirectional transcription of the repeat sequence, accumulation of repeat RNA into nuclear foci sequestering specific RNA-binding proteins (RBPs) and translation of RNA repeats into dipeptide repeat proteins (DPRs) by repeat-associated non-AUG (RAN)-initiated translation. Over the past few years the true extent of RNA misprocessing in C9orf72-associated ALS/FTD has begun to emerge and disruptions have been identified in almost all aspects of the life of an RNA molecule, including release from RNA polymerase II, translation in the cytoplasm and degradation. Furthermore, several alterations have been identified in the processing of the C9orf72 RNA itself, in terms of its transcription, splicing and localization. This review article aims to consolidate our current knowledge on the consequence of the C9orf72 repeat expansion on RNA processing and draws attention to the mechanisms by which several aspects of C9orf72 molecular pathology converge to perturb every stage of RNA metabolism.

David Cornblath,  Kenneth Fischbeck,  D Cornblath … (2004)
Juvenile amyotrophic lateral sclerosis (ALS4) is a rare autosomal dominant form of juvenile amyotrophic lateral sclerosis (ALS) characterized by distal muscle weakness and atrophy, normal sensation, and pyramidal signs. Individuals affected with ALS4 usually have an onset of symptoms at age <25 years, a slow rate of progression, and a normal life span. The ALS4 locus maps to a 1.7-Mb interval on chromosome 9q34 flanked by D9S64 and D9S1198. To identify the molecular basis of ALS4, we tested 19 genes within the ALS4 interval and detected missense mutations (T3I, L389S, and R2136H) in the Senataxin gene (SETX). The SETX gene encodes a novel 302.8-kD protein. Although its function remains unknown, SETX contains a DNA/RNA helicase domain with strong homology to human RENT1 and IGHMBP2, two genes encoding proteins known to have roles in RNA processing. These observations of ALS4 suggest that mutations in SETX may cause neuronal degeneration through dysfunction of the helicase activity or other steps in RNA processing.

TDP-43 promotes microRNA biogenesis as a component of the Drosha and Dicer complexes.

Yukio Kawahara,  Ai Sato (2012)
Although aberrant microRNA (miRNA) expression is linked to human diseases including cancer, the mechanisms that regulate the expression of each individual miRNA remain largely unknown. TAR DNA-binding protein-43 (TDP-43) is homologous to the heterogeneous nuclear ribonucleoproteins (hnRNPs), which are involved in RNA processing, and its abnormal cellular distribution is a key feature of amyotrophic lateral sclerosis (ALS) and frontotemporal lobar degeneration (FTLD), two neurodegenerative diseases. Here, we show that TDP-43 facilitates the production of a subset of precursor miRNAs (pre-miRNAs) by both interacting with the nuclear Drosha complex and binding directly to the relevant primary miRNAs (pri-miRNAs). Furthermore, cytoplasmic TDP-43, which interacts with the Dicer complex, promotes the processing of some of these pre-miRNAs via binding to their terminal loops. Finally, we show that involvement of TDP-43 in miRNA biogenesis is indispensable for neuronal outgrowth. These results support a previously uncharacterized role for TDP-43 in posttranscriptional regulation of miRNA expression in both the nucleus and the cytoplasm.