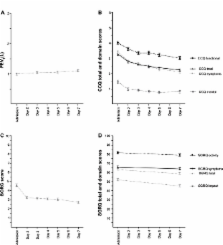 Data from two randomized controlled COPD exacerbation trials (n = 210 and n = 45 patients) were used to describe both the feasibility of daily collection of and the day-to-day course of patient-reported outcomes during outpatient treatment or admission to hospital. In addition to clinical parameters, the BORG dyspnea score, the Clinical COPD Questionnaire (CCQ), and the St George’s Respiratory Questionnaire were used in Cox regression models to predict treatment failure, time to next exacerbation, and mortality in the hospital study.

All patient-reported outcomes showed a distinct pattern of improvement. In the multivariate models, absence of improvement in CCQ symptom score and impaired lung function were independent predictors of treatment failure. Health status and gender predicted time to next exacerbation. Five-year mortality was predicted by age, forced expiratory flow in one second % predicted, smoking status, and CCQ score. In outpatient management of exacerbations, health status was found to be less impaired than in hospitalized patients, while the rate and pattern of recovery was remarkably similar.

Daily health status measurements were found to predict treatment failure, which could help decision-making for patients hospitalized due to an exacerbation of COPD.

Variation in intubation decisions for patients with chronic obstructive pulmonary disease in one critical care network.

M Wildman,  J O'Dea,  O. Kostopoulou … (2003)
Anecdotal evidence suggests variation in intubation decisions for chronic obstructive pulmonary disease (COPD) patients with respiratory failure, but little is known about the extent of or reasons for this variability.

The EXACT-Pro: measuring exacerbations of COPD.