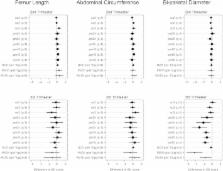 Examine the effect of maternal exposure to ambient concentrations of PM 10, PM 2.5 and nitrogen dioxide (NO 2) for in utero fetal growth, size at birth and effect modification by smoking status.

In the whole sample ( n = 13,775 pregnancies), exposure to PM 10, PM 2.5 and NO 2 was associated with reductions in measurements at birth and biparietal diameter from late second trimester onwards. Among mothers who did not smoke at all during pregnancy ( n = 11,075), associations between biparietal diameter and pollution exposure remained significant but were insignificant among those who did smoke ( n = 2700). Femur length and abdominal circumference were not significantly associated with pollution exposure.

Fetal growth is strongly associated with particulates exposure from later in second trimester onwards but the effect appears to be subsumed by smoking. Typical ambient exposures in this study were relatively low compared to other studies and given these results, it may be necessary to consider reducing recommended “safe” ambient air exposures.

Marie Pedersen, Lise Giorgis-Allemand, Claire Bernard … (2013)
Ambient air pollution has been associated with restricted fetal growth, which is linked with adverse respiratory health in childhood. We assessed the effect of maternal exposure to low concentrations of ambient air pollution on birthweight. We pooled data from 14 population-based mother-child cohort studies in 12 European countries. Overall, the study population included 74 178 women who had singleton deliveries between Feb 11, 1994, and June 2, 2011, and for whom information about infant birthweight, gestational age, and sex was available. The primary outcome of interest was low birthweight at term (weight <2500 g at birth after 37 weeks of gestation). Mean concentrations of particulate matter with an aerodynamic diameter of less than 2·5 μm (PM2·5), less than 10 μm (PM10), and between 2·5 μm and 10 μm during pregnancy were estimated at maternal home addresses with temporally adjusted land-use regression models, as was PM2·5 absorbance and concentrations of nitrogen dioxide (NO2) and nitrogen oxides. We also investigated traffic density on the nearest road and total traffic load. We calculated pooled effect estimates with random-effects models. A 5 μg/m(3) increase in concentration of PM2·5 during pregnancy was associated with an increased risk of low birthweight at term (adjusted odds ratio [OR] 1·18, 95% CI 1·06-1·33). An increased risk was also recorded for pregnancy concentrations lower than the present European Union annual PM2·5 limit of 25 μg/m(3) (OR for 5 μg/m(3) increase in participants exposed to concentrations of less than 20 μg/m(3) 1·41, 95% CI 1·20-1·65). PM10 (OR for 10 μg/m(3) increase 1·16, 95% CI 1·00-1·35), NO2 (OR for 10 μg/m(3) increase 1·09, 1·00-1·19), and traffic density on nearest street (OR for increase of 5000 vehicles per day 1·06, 1·01-1·11) were also associated with increased risk of low birthweight at term. The population attributable risk estimated for a reduction in PM2·5 concentration to 10 μg/m(3) during pregnancy corresponded to a decrease of 22% (95% CI 8-33%) in cases of low birthweight at term. Exposure to ambient air pollutants and traffic during pregnancy is associated with restricted fetal growth. A substantial proportion of cases of low birthweight at term could be prevented in Europe if urban air pollution was reduced. The European Union. Copyright © 2013 Elsevier Ltd. All rights reserved.