Survey datasets on the externalizing behaviors of primary school pupils and secondary school students in some selected schools in Ogun State, Nigeria 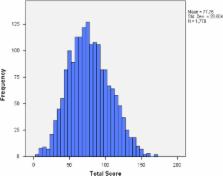 This data article contains the partial analysis (descriptive statistics) of data obtained from 1770 primary school pupils and secondary school students in three Local Government Areas of Ogun State, Nigeria. The schools are either privately owned or public (government owned) schools. The aim of the field survey is to measure the level and patterns of externalizing behavior of the respondents. The data was collected using a standardized questionnaire. The questionnaire is a modification of Achenbach manual for Child behavior checklist (Achenbach, 2001) [1] and manual for Youth self-report (Achenbach and Rescorla, 2001) [2]. The questionnaire was designed to suit the demographic and socio-cultural nature of the target population. Analysis of the data can provide useful insights to the patterns of externalizing behavior of primary school pupils and secondary school students.

The classification of child psychopathology: a review and analysis of empirical efforts.

Childhood externalizing and internalizing psychopathology in the prediction of early substance use.

William Iacono,  M. King,  Matt McGue (2004)
To examine the prospective relationships between childhood externalizing and internalizing disorders and substance use in early adolescence. Longitudinal, community-based study of twins (aged 11 at intake; aged 14 at follow-up). The sample was composed of twins participating in the Minnesota Twin Family Study, an epidemiological sample of twins and their families representative of the state population of Minnesota. A total of 699 twin girls and 665 twin boys participated at both time-points. Twins participated in in-person, life-time diagnostic assessments of the following childhood DSM III-R externalizing and internalizing disorders at age 11: conduct disorder, oppositional defiant disorder, attention deficit hyperactivity disorder, major depressive disorder and in addition, for girls only, overanxious disorder and separation anxiety disorder. At ages 11 and 14, substance use and abuse were assessed. Externalizing psychopathology predicted having tried alcohol, nicotine and cannabis by age 14 as well as regular and advanced experience with these substances. Internalizing disorders showed weak effects, with only major depression at age 11 showing a significant relationship with substance use at age 14. The results suggest that externalizing psychopathology is a robust prospective predictor of a variety of early onset substance use behaviors and is systematically related to degree of substance use involvement. The results also suggest that depression may predict initiation of licit substance use in early adolescence.