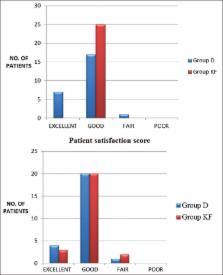 Moderate sedation is required for out-patient transesophageal echocardiography (TEE). Our objective was to compare the effect of Ketofol and dexmedetomidine for outpatient procedural sedation in diagnostic TEE with a hypothesis that Ketofol would be as effective as dexmedetomidine.

T M Savege,  Zachary B. Simpson,  M Ramsay … (1974)
Alphaxalone-alphadolone (Althesin), diluted and administered as a controlled infusion, was used as a sedative for 30 patients in an intensive therapy unit. This technique allowed rapid and accurate control of the level of sedation. It had three particularly useful applications: it provided "light sleep," allowed rapid variation in the level of sedation, and enabled repeated assessment of the central nervous system.Sedation was satisfactory for 86% of the total time, and no serious complications were attributed to the use of the drug. Furthermore, though alphaxalone-alphadolone was given for periods up to 20 days there was no evidence of tachyphylaxis or delay in recovery time.

Guidelines for performing a comprehensive transesophageal echocardiographic examination: recommendations from the American Society of Echocardiography and the Society of Cardiovascular Anesthesiologists.