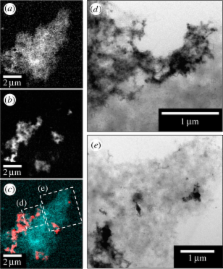 For decades, a link between increased levels of iron and areas of Alzheimer's disease (AD) pathology has been recognized, including AD lesions comprised of the peptide β-amyloid (Aβ). Despite many observations of this association, the relationship between Aβ and iron is poorly understood. Using X-ray microspectroscopy, X-ray absorption spectroscopy, electron microscopy and spectrophotometric iron(II) quantification techniques, we examine the interaction between Aβ(1–42) and synthetic iron(III), reminiscent of ferric iron stores in the brain. We report Aβ to be capable of accumulating iron(III) within amyloid aggregates, with this process resulting in Aβ-mediated reduction of iron(III) to a redox-active iron(II) phase. Additionally, we show that the presence of aluminium increases the reductive capacity of Aβ, enabling the redox cycling of the iron. These results demonstrate the ability of Aβ to accumulate iron, offering an explanation for previously observed local increases in iron concentration associated with AD lesions. Furthermore, the ability of iron to form redox-active iron phases from ferric precursors provides an origin both for the redox-active iron previously witnessed in AD tissue, and the increased levels of oxidative stress characteristic of AD. These interactions between Aβ and iron deliver valuable insights into the process of AD progression, which may ultimately provide targets for disease therapies.

Iron behaving badly: inappropriate iron chelation as a major contributor to the aetiology of vascular and other progressive inflammatory and degenerative diseases

Douglas Kell (2009)
Background The production of peroxide and superoxide is an inevitable consequence of aerobic metabolism, and while these particular 'reactive oxygen species' (ROSs) can exhibit a number of biological effects, they are not of themselves excessively reactive and thus they are not especially damaging at physiological concentrations. However, their reactions with poorly liganded iron species can lead to the catalytic production of the very reactive and dangerous hydroxyl radical, which is exceptionally damaging, and a major cause of chronic inflammation. Review We review the considerable and wide-ranging evidence for the involvement of this combination of (su)peroxide and poorly liganded iron in a large number of physiological and indeed pathological processes and inflammatory disorders, especially those involving the progressive degradation of cellular and organismal performance. These diseases share a great many similarities and thus might be considered to have a common cause (i.e. iron-catalysed free radical and especially hydroxyl radical generation). The studies reviewed include those focused on a series of cardiovascular, metabolic and neurological diseases, where iron can be found at the sites of plaques and lesions, as well as studies showing the significance of iron to aging and longevity. The effective chelation of iron by natural or synthetic ligands is thus of major physiological (and potentially therapeutic) importance. As systems properties, we need to recognise that physiological observables have multiple molecular causes, and studying them in isolation leads to inconsistent patterns of apparent causality when it is the simultaneous combination of multiple factors that is responsible. This explains, for instance, the decidedly mixed effects of antioxidants that have been observed, since in some circumstances (especially the presence of poorly liganded iron) molecules that are nominally antioxidants can actually act as pro-oxidants. The reduction of redox stress thus requires suitable levels of both antioxidants and effective iron chelators. Some polyphenolic antioxidants may serve both roles. Understanding the exact speciation and liganding of iron in all its states is thus crucial to separating its various pro- and anti-inflammatory activities. Redox stress, innate immunity and pro- (and some anti-)inflammatory cytokines are linked in particular via signalling pathways involving NF-kappaB and p38, with the oxidative roles of iron here seemingly involved upstream of the IkappaB kinase (IKK) reaction. In a number of cases it is possible to identify mechanisms by which ROSs and poorly liganded iron act synergistically and autocatalytically, leading to 'runaway' reactions that are hard to control unless one tackles multiple sites of action simultaneously. Some molecules such as statins and erythropoietin, not traditionally associated with anti-inflammatory activity, do indeed have 'pleiotropic' anti-inflammatory effects that may be of benefit here. Conclusion Overall we argue, by synthesising a widely dispersed literature, that the role of poorly liganded iron has been rather underappreciated in the past, and that in combination with peroxide and superoxide its activity underpins the behaviour of a great many physiological processes that degrade over time. Understanding these requires an integrative, systems-level approach that may lead to novel therapeutic targets.

Iron accumulation in Alzheimer disease is a source of redox-generated free radicals.

Brian Sayre,  George Perry,  Andrew D. A. C. Smith … (1997)
Damage from free radicals has been demonstrated in susceptible neuronal populations in cases of Alzheimer disease. In this study, we investigated whether iron, a potent source of the highly reactive hydroxyl radical that is generated by the Fenton reaction with H2O2, might contribute to the source of radicals in Alzheimer disease. We found, using a modified histochemical technique that relies on the formation of mixed valence iron complexes, that redox-active iron is associated with the senile plaques and neurofibrillary tangles-the pathological hallmark lesions of this disease. This lesion-associated iron is able to participate in in situ oxidation and readily catalyzes an H2O2-dependent oxidation. Furthermore, removal of iron was completely effected using deferoxamine, after which iron could be rebound to the lesions. Characterization of the iron-binding site suggests that binding is dependent on available histidine residues and on protein conformation. Taken together, these findings indicate that iron accumulation could be an important contributor toward the oxidative damage of Alzheimer disease.

Mineralization in ferritin: an efficient means of iron storage.

N.Dennis Chasteen,  Pauline M. Harrison (1999)
Ferritins are a class of iron storage and mineralization proteins found throughout the animal, plant, and microbial kingdoms. Iron is stored within the protein shell of ferritin as a hydrous ferric oxide nanoparticle with a structure similar to that of the mineral "ferrihydrite." The eight hydrophilic channels that traverse the protein shell are thought to be the primary avenues by which iron gains entry to the interior of eukaryotic ferritins. Twenty-four subunits constitute the protein shell and, in mammalian ferritins, are of two types, H and L, which have complementary functions in iron uptake. The H chain contains a dinuclear ferroxidase site that is located within the four-helix bundle of the subunit; it catalyzes the oxidation of ferrous iron by O(2), producing H(2)O(2). The L subunit lacks this site but contains additional glutamate residues on the interior surface of the protein shell which produce a microenvironment that facilitates mineralization and the turnover of iron(III) at the H subunit ferroxidase site. Recent spectroscopic studies have shown that a di-Fe(III) peroxo intermediate is produced at the ferroxidase site followed by formation of a mu-oxobridged dimer, which then fragments and migrates to the nucleation sites to form incipient mineral core species. Once sufficient core has developed, iron oxidation and mineralization occur primarily on the surface of the growing crystallite, thus minimizing the production of potentially harmful H(2)O(2). Copyright 1999 Academic Press.

© 2014 The Authors. Published by the Royal Society under the terms of the Creative Commons Attribution License http://creativecommons.org/licenses/by/3.0/, which permits unrestricted use, provided the original author and source are credited.