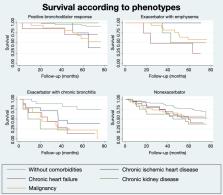 Chronic obstructive pulmonary disease (COPD) usually occurs alongside other conditions. Few studies on comorbidities have taken into account the phenotypes of COPD patients. The objective of this study is to evaluate the prevalence of comorbidities included in the Charlson index and their influence on the survival of patients with COPD, taking phenotypes into account.

An observational study was conducted on a group of 273 patients who had COPD and underwent spirometry in the first half of 2011, with a median prospective follow-up period of 68.15 months. The survival of these patients was analyzed according to the presence of various comorbidities.

Of the 273 patients, 93 (34.1%) died within the follow-up period. An increased presence of chronic ischemic heart disease (CIHD), chronic heart failure (CHF), chronic kidney disease (CKD), and malignancy was found in deceased patients. All of these conditions shorten the survival of COPD patients globally; however, when considering phenotypes, only CHF influences the exacerbator with chronic bronchitis phenotype, CKD influences the non-exacerbator phenotype, and malignancy influences the positive bronchodilator test (BDT) and exacerbator with chronic bronchitis phenotypes. In the multivariate model, advanced age (hazard ratio, HR: 1.05; p=0.001), CHF (HR: 1.74; p=0.030), and the presence of malignancy (HR: 1.78; p=0.010) were observed as independent mortality risk factors.

The survival is shorter in the presence of CIHD in overall COPD patients and also CHF, CKD, and malignancy for certain phenotypes. It is important to pay attention to these comorbidities in the comprehensive care of COPD patients.

Prevalence and outcomes of diabetes, hypertension and cardiovascular disease in COPD.

D. Mannino,  A Swensen,  Michael Thorn … (2008)
Chronic obstructive pulmonary disease (COPD) is associated with important chronic comorbid diseases, including cardiovascular disease, diabetes and hypertension. The present study analysed data from 20,296 subjects aged > or =45 yrs at baseline in the Atherosclerosis Risk in Communities Study (ARIC) and the Cardiovascular Health Study (CHS). The sample was stratified based on baseline lung function data, according to modified Global Initiative for Obstructive Lung Disease (GOLD) criteria. Comorbid disease at baseline and death and hospitalisations over a 5-yr follow-up were then searched for. Lung function impairment was found to be associated with more comorbid disease. In logistic regression models adjusting for age, sex, race, smoking, body mass index and education, subjects with GOLD stage 3 or 4 COPD had a higher prevalence of diabetes (odds ratio (OR) 1.5, 95% confidence interval (CI) 1.1-1.9), hypertension (OR 1.6, 95% CI 1.3-1.9) and cardiovascular disease (OR 2.4, 95% CI 1.9-3.0). Comorbid disease was associated with a higher risk of hospitalisation and mortality that was worse in people with impaired lung function. Lung function impairment is associated with a higher risk of comorbid disease, which contributes to a higher risk of adverse outcomes of mortality and hospitalisations.

Peter Barnes,  P Kirkham (2013)
Oxidative stress is now recognized as a major predisposing factor in the pathogenesis of COPD. Existing therapies for COPD are ineffective at halting disease progression, with bronchodilators being the mainstay of pharmacotherapy, providing symptomatic relief only. It is, therefore, important for a better understanding of the underlying mechanisms by which oxidative stress drives disease pathogenesis to develop novel and more effective therapies. Antioxidant capacity in COPD is substantially reduced as a result of cigarette smoking and exacerbations, with oxidative stress persisting long after the cessation of cigarette smoking or exacerbation, due to the continued production of reactive oxygen species from endogenous sources. We discuss (1) how oxidative stress arises in the lung, (2) how it is neutralized, (3) what genetic factors may predispose to the development of COPD, and (4) how this impacts inflammation and autoimmunity in the development of emphysema and small airways disease. Finally, various strategies have been considered to neutralize the increased oxidative burden present in COPD. This review highlights why current antioxidant strategies have so far failed and what promising alternatives are on the horizon. Moreover, a number of studies have shown that there is no single "magic bullet" to combat oxidative stress, but instead a combination therapy, targeting oxidative stress in the various subcellular compartments, may prove to be more effective in COPD.