Telenomus remus, a Candidate Parasitoid for the Biological Control of Spodoptera frugiperda in Africa, is already Present on the Continent 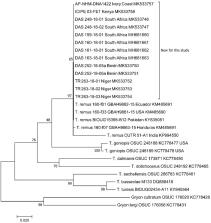 The fall armyworm, Spodoptera frugiperda, a moth originating from tropical and subtropical America, has recently become a serious pest of cereals in sub-Saharan Africa. Biological control offers an economically and environmentally safer alternative to synthetic insecticides that are being used for the management of this pest. Consequently, various biological control options are being considered, including the introduction of Telenomus remus, the main egg parasitoid of S. frugiperda in the Americas, where it is already used in augmentative biological control programmes. During surveys in South, West, and East Africa, parasitized egg masses of S. frugiperda were collected, and the emerged parasitoids were identified through morphological observations and molecular analyses as T. remus. The presence of T. remus in Africa in at least five countries provides a great opportunity to develop augmentative biological control methods and register the parasitoid against S. frugiperda. Surveys should be carried out throughout Africa to assess the present distribution of T. remus on the continent, and the parasitoid could be re-distributed in the regions where it is absent, following national and international regulations. Classical biological control should focus on the importation of larval parasitoids from the Americas.

CONFIDENCE LIMITS ON PHYLOGENIES: AN APPROACH USING THE BOOTSTRAP.

Joseph Felsenstein (1985)
The recently-developed statistical method known as the "bootstrap" can be used to place confidence intervals on phylogenies. It involves resampling points from one's own data, with replacement, to create a series of bootstrap samples of the same size as the original data. Each of these is analyzed, and the variation among the resulting estimates taken to indicate the size of the error involved in making estimates from the original data. In the case of phylogenies, it is argued that the proper method of resampling is to keep all of the original species while sampling characters with replacement, under the assumption that the characters have been independently drawn by the systematist and have evolved independently. Majority-rule consensus trees can be used to construct a phylogeny showing all of the inferred monophyletic groups that occurred in a majority of the bootstrap samples. If a group shows up 95% of the time or more, the evidence for it is taken to be statistically significant. Existing computer programs can be used to analyze different bootstrap samples by using weights on the characters, the weight of a character being how many times it was drawn in bootstrap sampling. When all characters are perfectly compatible, as envisioned by Hennig, bootstrap sampling becomes unnecessary; the bootstrap method would show significant evidence for a group if it is defined by three or more characters.

Estimation of the number of nucleotide substitutions in the control region of mitochondrial DNA in humans and chimpanzees.

K Tamura,  M Nei (1993)
Examining the pattern of nucleotide substitution for the control region of mitochondrial DNA (mtDNA) in humans and chimpanzees, we developed a new mathematical method for estimating the number of transitional and transversional substitutions per site, as well as the total number of nucleotide substitutions. In this method, excess transitions, unequal nucleotide frequencies, and variation of substitution rate among different sites are all taken into account. Application of this method to human and chimpanzee data suggested that the transition/transversion ratio for the entire control region was approximately 15 and nearly the same for the two species. The 95% confidence interval of the age of the common ancestral mtDNA was estimated to be 80,000-480,000 years in humans and 0.57-2.72 Myr in common chimpanzees.