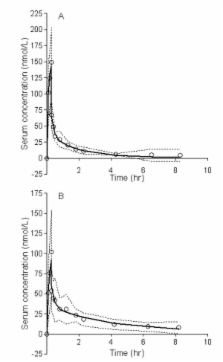 An increased and prolonged duration of pain relief after morphine administration has been found in elderly patients. Whether this is due to alterations in pharmacokinetics, receptor binding profile or other factors remains unsolved. The aims were to elucidate the pharmacokinetics after intravenous administration of morphine and oxycodone in elderly patients older than 70 years.

A randomized non-blinded study with 16 patients aged older than 70 years scheduled for elective hip replacement receiving morphine or oxycodone 0.05 mg/kg as an IV infusion over 15 minutes.

The 118 A > G polymorphism in the human mu-opioid receptor gene may increase morphine requirements in patients with pain caused by malignant disease.

C Baar,  M Holthe,  P Klepstad … (2004)
Dispositions for genes encoding opioid receptors may explain some variability in morphine efficacy. Experimental studies show that morphine and morphine-6-glucuronide are less effective in individuals carrying variant alleles caused by the 118 A > G polymorphism in the mu-opioid receptor gene (OPRM1). The purpose of the study was to investigate whether this and other genetic polymorphisms in OPRM1 influence the efficacy of morphine in cancer pain patients. We screened 207 cancer pain patients on oral morphine treatment for four frequent OPRM1 gene polymorphisms. The polymorphisms were the -172 G > T polymorphism in the 5'untranslated region of exon 1, the 118 A > G polymorphism in exon 1, and the IVS2 + 31 G > A and IVS2 + 691 G > C polymorphisms, both in intron 2. Ninety-nine patients with adequately controlled pain were included in an analysis comparing morphine doses and serum concentrations of morphine and morphine metabolites in the different genotypes for the OPRM1 polymorphisms. No differences related to the -172 G > T, the IVS2 + 31 G > A and the IVS2 + 691 G > C polymorphisms were observed. Patients homozygous for the variant G allele of the 118 A > G polymorphism (n = 4) needed more morphine to achieve pain control, compared to heterozygous (n = 17) and homozygous wild-type (n = 78) individuals. This difference was not explained by other factors such as duration of morphine treatment, performance status, time since diagnosis, time until death, or adverse symptoms. Patients homozygous for the 118 G allele of the mu-opioid receptor need higher morphine doses to achieve pain control. Thus, genetic variation at the gene encoding the mu-opioid receptor contributes to variability in patients' responses to morphine.

J Sawe,  L Hasselstrøm (1993)
Morphine, morphine-6-glucuronide (M6G), morphine-3-glucuronide (M3G) and normorphine were analysed with high performance liquid chromatography in plasma and urine, collected over 72 h after administration of single intravenous 5 mg and oral 20 mg doses of morphine to 7 healthy volunteers. Systemic plasma clearance of morphine was on average 21.1 +/- 3.4 ml/min/kg (1.27 +/- 0.20 L/h/kg), volume of distribution was 2.9 +/- 0.8 L/kg and oral bioavailability was 29.2 +/- 7.2%. Clearance of morphine to form M3G and M6G comprised 57.3% and 10.4%, respectively, and renal clearance comprised 10.9% of total systemic plasma clearance; hence, more than one-fifth of a dose (20.8%) remained as unidentified residual clearance. On the basis of the area under the plasma concentration-time curves determined after oral and intravenous administration, the ratios of M6G:morphine were 3.6 +/- 1.2 and 0.7 +/- 0.3, respectively. The corresponding figures for M3G:morphine were 29.9 +/- 6.8 and 7.7 +/- 1.4. Differences in metabolic ratios between the parenteral and oral routes could be attributed solely to differences in morphine concentrations as evidenced both by plasma concentrations and amounts excreted in urine. An oral:parenteral potency ratio of 1:3 may, thus, be due to differences in circulating amounts of morphine since the proportions of an administered dose found as M6G and M3G after administration by both routes were equal. A major finding was a slowly declining terminal phase of morphine and metabolites that was evident both in plasma and in urinary excretion versus time curves, where the half-lives of morphine, M3G and M6G were 15.1 +/- 6.5 h, 11.2 +/- 2.7 h and 12.9 +/- 4.5 h, respectively. The terminal half-life of normorphine was 23.9 +/- 10.1 h after oral administration. Comparison of oral with intravenous excretion curves showed that a greater part of morphine and metabolites were excreted during the slowly declining phase after the oral dose than the intravenous dose, which is highly suggestive of enterohepatic cycling. The renal clearance of M6G and morphine was seen to exceed creatinine clearance, possibly due to an active secretion process.

A pharmacogenetic study of uridine diphosphate-glucuronosyltransferase 2B7 in patients receiving morphine.