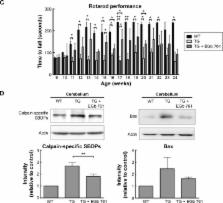 Spinocerebellar ataxia type 17 (SCA 17) is a polyglutamine disease caused by the expansion of CAG/CAA repeats in the TATA box-binding protein (TBP) gene. The Ginkgo biloba extract, EGb 761, contains flavonoids and terpenoids with a potential use for the treatment of neurodegenerative diseases such as Alzheimer’s and Parkinson’s diseases. The neuroprotective effects of EGb 761 are obvious, but whether the EGb 761 has therapeutic effects in SCA 17 is still unclear. To manage our issues, we have generated TBP/79Q-expressing SH-SY5Y cells and SCA 17 transgenic mice with the mutant hTBP gene. In in vitro experiment, we observed that the EGb 761 treatment decreased the amount of sodium dodecyl sulfate-insoluble proteins in the TBP/79Q-expressing SH-SY5Y cells. We further found that the EGb 761 treatment could inhibit excitotoxicity and calcium influx and reduce the expression of apoptotic markers in glutamate-treated SH-SY5Y neuroblastoma cells. In in vivo experiment, we observed that the EGb 761 treatment (100 mg/kg intraperitoneal injection per day) could relieve the motor deficiencies of the SCA 17 transgenic mice. Our findings provide evidence that the EGb 761 treatment can be a remedy for SCA 17 via suppressing excitotoxicity and apoptosis in SCA 17 cell and animal models. Therefore, we suggest that EGb 761 may be a potential therapeutic agent for treating SCA 17.

Yury Kukushkin,  F. Ulrich Hartl,  Sae Park … (2013)
Dysfunction of protein quality control contributes to the cellular pathology of polyglutamine (polyQ) expansion diseases and other neurodegenerative disorders associated with aggregate deposition. Here we analyzed how polyQ aggregation interferes with the clearance of misfolded proteins by the ubiquitin-proteasome system (UPS). We show in a yeast model that polyQ-expanded proteins inhibit the UPS-mediated degradation of misfolded cytosolic carboxypeptidase Y(∗) fused to green fluorescent protein (GFP) (CG(∗)) without blocking ubiquitylation or proteasome function. Quantitative proteomic analysis reveals that the polyQ aggregates sequester the low-abundant and essential Hsp40 chaperone Sis1p. Overexpression of Sis1p restores CG(∗) degradation. Surprisingly, we find that Sis1p, and its homolog DnaJB1 in mammalian cells, mediates the delivery of misfolded proteins into the nucleus for proteasomal degradation. Sis1p shuttles between cytosol and nucleus, and its cellular level limits the capacity of this quality control pathway. Upon depletion of Sis1p by polyQ aggregation, misfolded proteins are barred from entering the nucleus and form cytoplasmic inclusions. Copyright © 2013 Elsevier Inc. All rights reserved.

Emerging role of polyphenolic compounds in the treatment of neurodegenerative diseases: a review of their intracellular targets.

Charles Ramassamy (2006)
Aging is the major risk factor for neurodegenerative diseases such as Alzheimer's and Parkinson's diseases. A large body of evidence indicates that oxidative stress is involved in the pathophysiology of these diseases. Oxidative stress can induce neuronal damages, modulate intracellular signaling, ultimately leading to neuronal death by apoptosis or necrosis. Thus antioxidants have been studied for their effectiveness in reducing these deleterious effects and neuronal death in many in vitro and in vivo studies. Increasing number of studies demonstrated the efficacy of polyphenolic antioxidants from fruits and vegetables to reduce or to block neuronal death occurring in the pathophysiology of these disorders. These studies revealed that other mechanisms than the antioxidant activities could be involved in the neuroprotective effect of these phenolic compounds. We will review some of these mechanisms and particular emphasis will be given to polyphenolic compounds from green tea, the Ginkgo biloba extract EGb 761, blueberries extracts, wine components and curcumin.

Anton Maximov,  Tie-Shan Tang,  Ilya Bezprozvanny … (2003)
Huntington's disease (HD) is caused by polyglutamine expansion (exp) in huntingtin (Htt). The type 1 inositol (1,4,5)-triphosphate receptor (InsP3R1) is an intracellular calcium (Ca2+) release channel that plays an important role in neuronal function. In a yeast two-hybrid screen with the InsP3R1 carboxy terminus, we isolated Htt-associated protein-1A (HAP1A). We show that an InsP3R1-HAP1A-Htt ternary complex is formed in vitro and in vivo. In planar lipid bilayer reconstitution experiments, InsP3R1 activation by InsP3 is sensitized by Httexp, but not by normal Htt. Transfection of full-length Httexp or caspase-resistant Httexp, but not normal Htt, into medium spiny striatal neurons faciliates Ca2+ release in response to threshold concentrations of the selective mGluR1/5 agonist 3,5-DHPG. Our findings identify a novel molecular link between Htt and InsP3R1-mediated neuronal Ca2+ signaling and provide an explanation for the derangement of cytosolic Ca2+ signaling in HD patients and mouse models.