Language Structures May Adapt to the Sociolinguistic Environment, but It Matters What and How You Count: A Typological Study of Verbal and Nominal Complexity 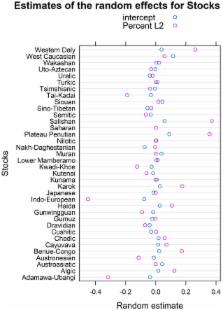 In this article we evaluate claims that language structure adapts to sociolinguistic environment. We present the results of two typological case studies examining the effects of the number of native (=L1) speakers and the proportion of adult second language (=L2) learners on language structure. Data from more than 300 languages suggest that testing the effect of population size and proportion of adult L2 learners on features of verbal and nominal complexity produces conflicting results on different grammatical features. The results show that verbal inflectional synthesis adapts to the sociolinguistic environment but the number of genders does not. The results also suggest that modeling population size together with proportion of L2 improves model fit compared to modeling them independently of one another. We thus argue that surveying population size alone may be insufficient to detect possible adaptation of linguistic structure to the sociolinguistic environment. Rather, other features, such as proportion of L2 speakers, prestige and social network density, should be studied, and if demographic numeric data are used, they should not be used in isolation but rather in competition with other sociolinguistic features. We also suggest that not all types of language structures within a given grammatical domain are equally sensitive to the effect of sociolinguistic variables, and that more exploratory studies are needed before we can arrive at a reliable set of grammatical features that may be potentially most (and least) adaptive to social structures.

Holger Schielzeth, Wolfgang Forstmeier (2008)
Mixed-effect models are frequently used to control for the nonindependence of data points, for example, when repeated measures from the same individuals are available. The aim of these models is often to estimate fixed effects and to test their significance. This is usually done by including random intercepts, that is, intercepts that are allowed to vary between individuals. The widespread belief is that this controls for all types of pseudoreplication within individuals. Here we show that this is not the case, if the aim is to estimate effects that vary within individuals and individuals differ in their response to these effects. In these cases, random intercept models give overconfident estimates leading to conclusions that are not supported by the data. By allowing individuals to differ in the slopes of their responses, it is possible to account for the nonindependence of data points that pseudoreplicate slope information. Such random slope models give appropriate standard errors and are easily implemented in standard statistical software. Because random slope models are not always used where they are essential, we suspect that many published findings have too narrow confidence intervals and a substantially inflated type I error rate. Besides reducing type I errors, random slope models have the potential to reduce residual variance by accounting for between-individual variation in slopes, which makes it easier to detect treatment effects that are applied between individuals, hence reducing type II errors as well.

Quentin D. Atkinson (2011)
Human genetic and phenotypic diversity declines with distance from Africa, as predicted by a serial founder effect in which successive population bottlenecks during range expansion progressively reduce diversity, underpinning support for an African origin of modern humans. Recent work suggests that a similar founder effect may operate on human culture and language. Here I show that the number of phonemes used in a global sample of 504 languages is also clinal and fits a serial founder-effect model of expansion from an inferred origin in Africa. This result, which is not explained by more recent demographic history, local language diversity, or statistical non-independence within language families, points to parallel mechanisms shaping genetic and linguistic diversity and supports an African origin of modern human languages.