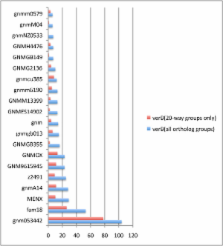 Rapid annotation and comparisons of genomes from multiple isolates (pan-genomes) is becoming commonplace due to advances in sequencing technology. Genome annotations can contain inconsistencies and errors that hinder comparative analysis even within a single species. Tools are needed to compare and improve annotation quality across sets of closely related genomes.

Whole genome multiple alignment can be used to efficiently identify orthologs and annotation problem areas in a bacterial pan-genome. Comparisons of annotated gene structures within a species may show more variation than is actually present in the genome, indicating errors in genome annotation. Our new tool Mugsy-Annotator assists re-annotation efforts by highlighting edits that improve annotation consistency.

Doug Hyatt,  Gwo-Liang Chen,  Philip LoCascio … (2010)
Background The quality of automated gene prediction in microbial organisms has improved steadily over the past decade, but there is still room for improvement. Increasing the number of correct identifications, both of genes and of the translation initiation sites for each gene, and reducing the overall number of false positives, are all desirable goals. Results With our years of experience in manually curating genomes for the Joint Genome Institute, we developed a new gene prediction algorithm called Prodigal (PROkaryotic DYnamic programming Gene-finding ALgorithm). With Prodigal, we focused specifically on the three goals of improved gene structure prediction, improved translation initiation site recognition, and reduced false positives. We compared the results of Prodigal to existing gene-finding methods to demonstrate that it met each of these objectives. Conclusion We built a fast, lightweight, open source gene prediction program called Prodigal http://compbio.ornl.gov/prodigal/. Prodigal achieved good results compared to existing methods, and we believe it will be a valuable asset to automated microbial annotation pipelines.

Aaron Darling,  Bob Mau,  Nicole T Perna (2010)
Background Multiple genome alignment remains a challenging problem. Effects of recombination including rearrangement, segmental duplication, gain, and loss can create a mosaic pattern of homology even among closely related organisms. Methodology/Principal Findings We describe a new method to align two or more genomes that have undergone rearrangements due to recombination and substantial amounts of segmental gain and loss (flux). We demonstrate that the new method can accurately align regions conserved in some, but not all, of the genomes, an important case not handled by our previous work. The method uses a novel alignment objective score called a sum-of-pairs breakpoint score, which facilitates accurate detection of rearrangement breakpoints when genomes have unequal gene content. We also apply a probabilistic alignment filtering method to remove erroneous alignments of unrelated sequences, which are commonly observed in other genome alignment methods. We describe new metrics for quantifying genome alignment accuracy which measure the quality of rearrangement breakpoint predictions and indel predictions. The new genome alignment algorithm demonstrates high accuracy in situations where genomes have undergone biologically feasible amounts of genome rearrangement, segmental gain and loss. We apply the new algorithm to a set of 23 genomes from the genera Escherichia, Shigella, and Salmonella. Analysis of whole-genome multiple alignments allows us to extend the previously defined concepts of core- and pan-genomes to include not only annotated genes, but also non-coding regions with potential regulatory roles. The 23 enterobacteria have an estimated core-genome of 2.46Mbp conserved among all taxa and a pan-genome of 15.2Mbp. We document substantial population-level variability among these organisms driven by segmental gain and loss. Interestingly, much variability lies in intergenic regions, suggesting that the Enterobacteriacae may exhibit regulatory divergence. Conclusions The multiple genome alignments generated by our software provide a platform for comparative genomic and population genomic studies. Free, open-source software implementing the described genome alignment approach is available from http://gel.ahabs.wisc.edu/mauve.