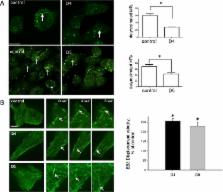 Drosophila homologue of Diaphanous 1 (DIAPH1) regulates actin polymerization and microtubule (MT) stabilization upon stimulation with lysophosphatidic acid (LPA). Recently, we showed strongly reduced lung metastasis of DIAPH1-depleted colon cancer cells but we found accumulations of DIAPH1-depleted cells in bone marrow. Here, we analyzed possible organ- or tissue-specific metastasis of DIAPH1-depleted HCT-116 cells. Our data confirmed that depletion of DIAPH1 strongly inhibited lung metastasis and revealed that, in contrast to control cells, DIAPH1-depleted cells did not form metastases in further organs. Detailed mechanistic analysis on cells that were not stimulated with LPA to activate the cytoskeleton-modulating activity of DIAPH1, revealed that even under basal conditions DIAPH1 was essential for cellular adhesion to collagen. In non-stimulated cells DIAPH1 did not control actin dynamics but, interestingly, was essential for stabilization of microtubules (MTs). Additionally, DIAPH1 controlled directed vesicle trafficking and with this, local clustering of the adhesion protein integrin-β1 at the plasma membrane. Therefore, we conclude that under non-stimulating conditions DIAPH1 controls cellular adhesion by stabilizing MTs required for local clustering of integrin-β1 at the plasma membrane. Thus, blockade of DIAPH1-tubulin interaction may be a promising approach to inhibit one of the earliest steps in the metastatic cascade of colon cancer.

Deepa Naishadham,  Ahmedin Jemal,  Rebecca Siegel (2012)
Each year, the American Cancer Society estimates the numbers of new cancer cases and deaths expected in the United States in the current year and compiles the most recent data on cancer incidence, mortality, and survival based on incidence data from the National Cancer Institute, the Centers for Disease Control and Prevention, and the North American Association of Central Cancer Registries and mortality data from the National Center for Health Statistics. A total of 1,638,910 new cancer cases and 577,190 deaths from cancer are projected to occur in the United States in 2012. During the most recent 5 years for which there are data (2004-2008), overall cancer incidence rates declined slightly in men (by 0.6% per year) and were stable in women, while cancer death rates decreased by 1.8% per year in men and by 1.6% per year in women. Over the past 10 years of available data (1999-2008), cancer death rates have declined by more than 1% per year in men and women of every racial/ethnic group with the exception of American Indians/Alaska Natives, among whom rates have remained stable. The most rapid declines in death rates occurred among African American and Hispanic men (2.4% and 2.3% per year, respectively). Death rates continue to decline for all 4 major cancer sites (lung, colorectum, breast, and prostate), with lung cancer accounting for almost 40% of the total decline in men and breast cancer accounting for 34% of the total decline in women. The reduction in overall cancer death rates since 1990 in men and 1991 in women translates to the avoidance of about 1,024,400 deaths from cancer. Further progress can be accelerated by applying existing cancer control knowledge across all segments of the population, with an emphasis on those groups in the lowest socioeconomic bracket. Copyright © 2012 American Cancer Society, Inc.

A gene atlas of the mouse and human protein-encoding transcriptomes.

A I Su,  T Wiltshire,  S Batalov … (2004)
The tissue-specific pattern of mRNA expression can indicate important clues about gene function. High-density oligonucleotide arrays offer the opportunity to examine patterns of gene expression on a genome scale. Toward this end, we have designed custom arrays that interrogate the expression of the vast majority of protein-encoding human and mouse genes and have used them to profile a panel of 79 human and 61 mouse tissues. The resulting data set provides the expression patterns for thousands of predicted genes, as well as known and poorly characterized genes, from mice and humans. We have explored this data set for global trends in gene expression, evaluated commonly used lines of evidence in gene prediction methodologies, and investigated patterns indicative of chromosomal organization of transcription. We describe hundreds of regions of correlated transcription and show that some are subject to both tissue and parental allele-specific expression, suggesting a link between spatial expression and imprinting.

Contribution of platelets to tumour metastasis.

Cynthia Gay,  Brunhilde Felding-Habermann (2011)
Extensive experimental evidence shows that platelets support tumour metastasis. The activation of platelets and the coagulation system have a crucial role in the progression of cancer. Within the circulatory system, platelets guard tumour cells from immune elimination and promote their arrest at the endothelium, supporting the establishment of secondary lesions. These contributions of platelets to tumour cell survival and spread suggest platelets as a new avenue for therapy.