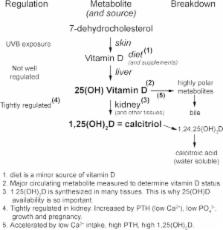 Patients with primary cutaneous melanomas that are ulcerated and >2 mm in thickness, >4 mm in thickness and those with nodal micrometastases at diagnosis, have few options for adjuvant treatment. Recent studies have suggested a role for vitamin D to delay melanoma recurrence and improve overall prognosis.

This is a pilot placebo-controlled randomised phase II trial to assess the feasibility, safety and toxicity of an oral loading dose of Vitamin D (500,000 IU) followed by an oral dose of 50,000 IU of Vitamin D monthly for 2 years in patients who have been treated for cutaneous melanoma by wide excision of the primary. Patients aged 18 – 79 years who have completed primary surgical treatment and have Stage IIb, IIc, IIIa (N1a, N2a) or IIIb (N1a, N2a) disease are eligible for randomisation 2:1 to active treatment or placebo. The primary endpoints are sufficiency of dose, adherence to study medication and safety of the drug. The secondary endpoints are participation and progression free survival. The study has been approved by the Ethics Review Committee (RPAH Zone) of the Sydney Local Health District, protocol number X09-0138.

Effective, non-toxic adjuvant therapy for high risk primary melanoma is not currently available. Favorable outcomes of this phase II study will form the basis for a multi-centre phase III study to assess whether the addition of oral high-dose vitamin D therapy in patients who have completed primary treatment for melanoma and are at high risk of recurrence will:

The Mel-D trial is conducted by the Australia and New Zealand Melanoma Trials Group (ANZMTG 02.09)

Amanda Stuart,  Kate Williamson,  Jeremy K M Sanders … (2010)
Improving vitamin D status may be an important modifiable risk factor to reduce falls and fractures; however, adherence to daily supplementation is typically poor. To determine whether a single annual dose of 500,000 IU of cholecalciferol administered orally to older women in autumn or winter would improve adherence and reduce the risk of falls and fracture. A double-blind, placebo-controlled trial of 2256 community-dwelling women, aged 70 years or older, considered to be at high risk of fracture were recruited from June 2003 to June 2005 and were randomly assigned to receive cholecalciferol or placebo each autumn to winter for 3 to 5 years. The study concluded in 2008. 500,000 IU of cholecalciferol or placebo. Falls and fractures were ascertained using monthly calendars; details were confirmed by telephone interview. Fractures were radiologically confirmed. In a substudy, 137 randomly selected participants underwent serial blood sampling for 25-hydroxycholecalciferol and parathyroid hormone levels. Women in the cholecalciferol (vitamin D) group had 171 fractures vs 135 in the placebo group; 837 women in the vitamin D group fell 2892 times (rate, 83.4 per 100 person-years) while 769 women in the placebo group fell 2512 times (rate, 72.7 per 100 person-years; incidence rate ratio [RR], 1.15; 95% confidence interval [CI], 1.02-1.30; P = .03). The incidence RR for fracture in the vitamin D group was 1.26 (95% CI, 1.00-1.59; P = .047) vs the placebo group (rates per 100 person-years, 4.9 vitamin D vs 3.9 placebo). A temporal pattern was observed in a post hoc analysis of falls. The incidence RR of falling in the vitamin D group vs the placebo group was 1.31 in the first 3 months after dosing and 1.13 during the following 9 months (test for homogeneity; P = .02). In the substudy, the median baseline serum 25-hydroxycholecalciferol was 49 nmol/L. Less than 3% of the substudy participants had 25-hydroxycholecalciferol levels lower than 25 nmol/L. In the vitamin D group, 25-hydroxycholecalciferol levels increased at 1 month after dosing to approximately 120 nmol/L, were approximately 90 nmol/L at 3 months, and remained higher than the placebo group 12 months after dosing. Among older community-dwelling women, annual oral administration of high-dose cholecalciferol resulted in an increased risk of falls and fractures. anzctr.org.au Identifier: ACTRN12605000658617; isrctn.org Identifier: ISRCTN83409867.

Philippe Autier (2007)
Ecological and observational studies suggest that low vitamin D status could be associated with higher mortality from life-threatening conditions including cancer, cardiovascular disease, and diabetes mellitus that account for 60% to 70% of total mortality in high-income countries. We examined the risk of dying from any cause in subjects who participated in randomized trials testing the impact of vitamin D supplementation (ergocalciferol [vitamin D(2)] or cholecalciferol [vitamin D(3)]) on any health condition. The literature up to November 2006 was searched without language restriction using the following databases: PubMed, ISI Web of Science (Science Citation Index Expanded), EMBASE, and the Cochrane Library. We identified 18 independent randomized controlled trials, including 57 311 participants. A total of 4777 deaths from any cause occurred during a trial size-adjusted mean of 5.7 years. Daily doses of vitamin D supplements varied from 300 to 2000 IU. The trial size-adjusted mean daily vitamin D dose was 528 IU. In 9 trials, there was a 1.4- to 5.2-fold difference in serum 25-hydroxyvitamin D between the intervention and control groups. The summary relative risk for mortality from any cause was 0.93 (95% confidence interval, 0.87-0.99). There was neither indication for heterogeneity nor indication for publication biases. The summary relative risk did not change according to the addition of calcium supplements in the intervention. Intake of ordinary doses of vitamin D supplements seems to be associated with decreases in total mortality rates. The relationship between baseline vitamin D status, dose of vitamin D supplements, and total mortality rates remains to be investigated. Population-based, placebo-controlled randomized trials with total mortality as the main end point should be organized for confirming these findings.

Agnes P. Chan,  Niall G. MacFarlane,  Elisabeth R Vieth (2001)
The Food and Nutrition Board of the National Academy of Sciences states that 95 microg vitamin D/d is the lowest observed adverse effect level (LOAEL). Our objective was to assess the efficacy and safety of prolonged vitamin D3 intakes of 25 and 100 microg (1000 and 4000 IU)/d. Efficacy was based on the lowest serum 25-hydroxyvitamin D [25(OH)D] concentration achieved by subjects taking vitamin D3; potential toxicity was monitored by measuring serum calcium concentrations and by calculating urinary calcium-creatinine ratios. Healthy men and women (n = 61) aged 41 +/- 9 y (mean +/- SD) were randomly assigned to receive either 25 or 100 microg vitamin D3/d for 2-5 mo, starting between January and February. Serum 25(OH)D was measured by radioimmunoassay. Baseline serum 25(OH)D was 40.7 +/- 15.4 nmol/L (mean +/- SD). From 3 mo on, serum 25(OH)D plateaued at 68.7 +/- 16.9 nmol/L in the 25-microg/d group and at 96.4 +/- 14.6 nmol/L in the 100-microg/d group. Summertime serum 25(OH)D concentrations in 25 comparable subjects not taking vitamin D3 were 46.7 +/- 17.8 nmol/L. The minimum and maximum plateau serum 25(OH)D concentrations in subjects taking 25 and 100 microg vitamin D3/d were 40 and 100 nmol/L and 69 and 125 nmol/L, respectively. Serum calcium and urinary calcium excretion did not change significantly at either dosage during the study. The 100-microg/d dosage of vitamin D3 effectively increased 25(OH)D to high-normal concentrations in practically all adults and serum 25(OH)D remained within the physiologic range; therefore, we consider 100 microg vitamin D3/d to be a safe intake.