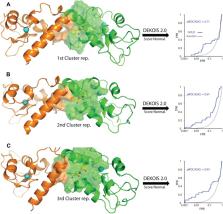 Survivin is a nodal protein involved in several cellular pathways. It is a member of the IAP family and an integral component of the chromosomal passenger complex, where it binds to borealin and INCENP through its dimerization interface. By targeting survivin with a small molecule at its dimerization interface, inhibition of the proliferation of cancer cells has been suggested. With Abbott 8, a small-molecule dimerization inhibitor has been recently reported. The structure–activity relationship of this series of inhibitors implied that the middle pyridin-2(1 H)-one ring did not tolerate modifications of any kind.

Based on the synthetic strategy of Abbott 8 using multicomponent reactions, we synthesized a series of small molecules bearing a novel rigidized core scaffold. This rigidization strategy was accomplished by integrating the pyridin-2(1 H)-one and its 6-phenyl substituent into a tricyclic structure, linking position 5 of pyridin-2(1 H)-one to the phenyl substituent by rings of different sizes. The new scaffolds were designed based on in silico molecular dynamics of survivin.

Binding of these rigidized scaffolds to the recombinant L54M mutant of survivin was evaluated, revealing affinities in the low micromolar range.

Control of apoptosis and mitotic spindle checkpoint by survivin.

Jenny E. Chu,  Dario C. Altieri,  G Ambrosini … (1998)
Progression of the cell cycle and control of apoptosis (programmed cell death) are thought to be intimately linked processes, acting to preserve homeostasis and developmental morphogenesis. Although proteins that regulate apoptosis have been implicated in restraining cell-cycle entry and controlling ploidy (chromosome number), the effector molecules at the interface between cell proliferation and cell survival have remained elusive. Here we show that a new inhibitor of apoptosis (IAP) protein, survivin, is expressed in the G2/M phase of the cell cycle in a cycle-regulated manner. At the beginning of mitosis, survivin associates with microtubules of the mitotic spindle in a specific and saturable reaction that is regulated by microtubule dynamics. Disruption of survivin-microtubule interactions results in loss of survivin's anti-apoptosis function and increased caspase-3 activity, a mechanism involved in cell death, during mitosis. These results indicate that survivin may counteract a default induction of apoptosis in G2/M phase. The overexpression of survivin in cancer may overcome this apoptotic checkpoint and favour aberrant progression of transformed cells through mitosis.