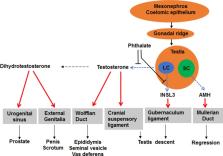 Male fetal Leydig cells in the testis secrete androgen and insulin-like 3, determining the sexual differentiation. The abnormal development of fetal Leydig cells could lead to the reduction of androgen and insulin-like 3, thus causing the male reproductive tract anomalies in male neonates, including cryptorchidism and hypospadias. Environmental pollutants, such as phthalic acid esters (phthalates), can perturb the development and differentiated function of Leydig cells, thereby contributing to the reproductive toxicity in the male. Here, we review the epidemiological studies in humans and experimental investigations in rodents of various phthalates. Most of phthalates disturb the expression of various genes encoded for steroidogenesis-related proteins and insulin-like 3 in fetal Leydig cells and the dose-additive effects are exerted after exposure in a mixture.

C Lambright,  B. Abbott,  Elle Parks … (2000)
Phthalate esters (PE) such as DEHP are high production volume plasticizers used in vinyl floors, food wraps, cosmetics, medical products, and toys. In spite of their widespread and long-term use, most PE have not been adequately tested for transgenerational reproductive toxicity. This is cause for concern, because several recent investigations have shown that DEHP, BBP, DBP, and DINP disrupt reproductive tract development of the male rat in an antiandrogenic manner. The present study explored whether the antiandrogenic action of DEHP occurs by (1) inhibiting testosterone (T) production, or by (2) inhibiting androgen action by binding to the androgen receptor (AR). Maternal DEHP treatment at 750 mg/kg/day from gestational day (GD) 14 to postnatal day (PND) 3 caused a reduction in T production, and reduced testicular and whole-body T levels in fetal and neonatal male rats from GD 17 to PND 2. As a consequence, anogenital distance (AGD) on PND 2 was reduced by 36% in exposed male, but not female, offspring. By GD 20, DEHP treatment also reduced testis weight. Histopathological evaluations revealed that testes in the DEHP treatment group displayed enhanced 3ss-HSD staining and increased numbers of multifocal areas of Leydig cell hyperplasia as well as multinucleated gonocytes as compared to controls at GD 20 and PND 3. In contrast to the effects of DEHP on T levels in vivo, neither DEHP nor its metabolite MEHP displayed affinity for the human androgen receptor at concentrations up to 10 microM in vitro. These data indicate that DEHP disrupts male rat sexual differentiation by reducing T to female levels in the fetal male rat during a critical stage of reproductive tract differentiation.

Y Chai,  Kenneth Fischbeck,  Henry Paulson … (2000)
Spinal and bulbar muscular atrophy (SBMA) is one of eight inherited neurodegenerative diseases known to be caused by CAG repeat expansion. The expansion results in an expanded polyglutamine tract, which likely confers a novel, toxic function to the affected protein. Cell culture and transgenic mouse studies have implicated the nucleus as a site for pathogenesis, suggesting that a critical nuclear factor or process is disrupted by the polyglutamine expansion. In this report we present evidence that CREB-binding protein (CBP), a transcriptional co-activator that orchestrates nuclear response to a variety of cell signaling cascades, is incorporated into nuclear inclusions formed by polyglutamine-containing proteins in cultured cells, transgenic mice and tissue from patients with SBMA. We also show CBP incorporation into nuclear inclusions formed in a cell culture model of another polyglutamine disease, spinocerebellar ataxia type 3. We present evidence that soluble levels of CBP are reduced in cells expressing expanded polyglutamine despite increased levels of CBP mRNA. Finally, we demonstrate that over-expression of CBP rescues cells from polyglutamine-mediated toxicity in neuronal cell culture. These data support a CBP-sequestration model of polyglutamine expansion disease.

Jillian Hurst,  D. Waxman (2003)
Phthalate esters are widely used as plasticizers in the manufacture of products made of polyvinyl chloride. Mono-(2-ethylhexyl)-phthalate (MEHP) induces rodent hepatocarcinogenesis by a mechanism that involves activation of the nuclear transcription factor peroxisome proliferator-activated receptor-alpha (PPARalpha). MEHP also activates PPAR-gamma (PPARgamma), which contributes to adipocyte differentiation and insulin sensitization. Human exposure to other phthalate monoesters, including metabolites of di-n-butyl phthalate and butyl benzyl phthalate, is substantially higher than that of MEHP, prompting this investigation of their potential for PPAR activation, assayed in COS cells and in PPAR-responsive liver (PPARalpha) and adipocyte (PPARgamma) cell lines. Monobenzyl phthalate (MBzP) and mono-sec-butyl phthalate (MBuP) both increased the COS cell transcriptional activity of mouse PPARalpha, with effective concentration for half-maximal response (EC50) values of 21 and 63 microM, respectively. MBzP also activated human PPARalpha (EC50=30 microM) and mouse and human PPARgamma (EC50=75-100 microM). MEHP was a more potent PPAR activator than MBzP or MBuP, with mouse PPARalpha more sensitive to MEHP (EC50=0.6 microM) than human PPARalpha (EC50=3.2 microM). MEHP activation of PPARgamma required somewhat higher concentrations, EC50=10.1 microM (mouse PPARgamma) and 6.2 microM (human PPARgamma). No significant PPAR activation was observed with the monomethyl, mono-n-butyl, dimethyl, or diethyl esters of phthalic acid. PPARalpha activation was verified in FAO rat liver cells stably transfected with PPARalpha, where expression of several endogenous PPARalpha target genes was induced by MBzP, MBuP, and MEHP. Similarly, activation of endogenous PPARgamma target genes was evidenced for all three phthalates by the stimulation of PPARgamma-dependent adipogenesis in the 3T3-L1 cell differentiation model. These findings demonstrate the potential of environmental phthalate monoesters for activation of rodent and human PPARs and may help to elucidate the molecular basis for the adverse health effects proposed to be associated with human phthalate exposure.

This article was submitted to Predictive Toxicology, a section of the journal Frontiers in Pharmacology