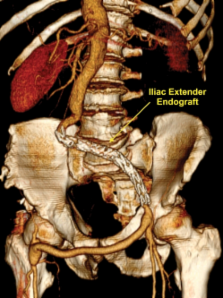 ScienceOpenPublisherPMC
Bookmark
There is no author summary for this article yet. Authors can add summaries to their articles on ScienceOpen to make them more accessible to a non-specialist audience.
INTRODUCTION Iliac arteriovenous fistula complicating an iliac anastomotic pseudoaneurysm is a rare occurrence after abdominal aortic aneurysm open repair.1,2 We report the third case in the literature and the first case to be treated by endovascular means. CASE REPORT A 71-year-old man underwent an abdominal aortic aneurysm open repair eleven years ago. The operation was performed with an aorto-bi-iliac Dacron graft. Three years later, the patient developed a right iliac artery occlusion. Correction was made with a femoral-to-femoral bypass. The patient presented in the emergency department with acute onset of orthopnea and exertional dyspnea. A physical examination indicated an abdominal thrill and murmur, jugular venous distention, cardiomegaly, and diminished distal pulses in both legs. His vital signs were within normal limits, and biochemical analysis revealed no significant abnormalities. A contrast-enhanced computed tomography angiography (CTA) scan revealed a left iliac artery anastomotic pseudoaneurysm complicated with an ilio-iliac arteriovenous fistula. The femoral-to-femoral bypass and the lower limb arteries were patent (Figures 1 and 2). An intra-operative arteriography confirmed the false aneurysm and arteriovenous fistula to the left iliac vein. The patient underwent endovascular repair with iliac extender grafts (“Medtronic Talent 16×12×75; 14×12×105 and 16×12×75”) in the left iliac artery, sealing the fistula. Control arteriography revealed no residual fistula, no endoleak and adequate lower limb perfusion. There were no postoperative complications, and the patient was discharged five days after surgery. His congestive heart failure symptoms disappeared. The follow-up CTA scan demonstrated no fistula, no endoleak and adequate lower limb perfusion (Figure 3). DISCUSSION Anastomotic false aneurysm is a well-known complication after arterial revascularization procedures. The progression of atherosclerotic disease, wound infection, chronic hypertension, and weakness of the host artery are possible causes for its development.3 Arteriovenous fistula complicating an anastomotic pseudoaneurysm is also common. It has been observed following spine surgery, gynecological surgery, difficult labors, malignancies, and trauma.4,5 However, it is an extremely rare complication after abdominal aortic aneurysm open repair, which is one of the most commonly performed arterial reconstructive procedures. This complication has been reported only twice in the literature.1,2 In a patient with a past medical history of an abdominal aortic aneurysm open repair, clinical findings (such as abdominal pulsatile mass, intra-abdominal bruit, and murmur and acute symptoms of congestive heart failure) can lead to the diagnosis of an arteriovenous fistula complicating an anastomotic false aneurysm. Contrast-enhanced CTA is the preferred noninvasive exam for confirming the diagnosis. It is also helpful for planning endovascular repair. Once diagnosed, arteriovenous fistula complicating an anastomotic false aneurysm must be treated to prevent its growth, rupture, and cardiac decompensation.6 Open techniques have been proposed for the treatment of complex aorto-iliac disease, but these cases involve high risks of bleeding, wound infection, and mortality. Endovascular techniques have been used to decrease these risks by reducing bleeding, the need for blood transfusion, operative time, and infection.7,8 There are no reports of the use of endovascular procedures for an arteriovenous fistula complicating an anastomotic pseudoaneurysm after an abdominal aortic aneurysm open repair. The two cases described in the literature1,2 were both treated with open surgical repair. CONCLUSION Endovascular treatment appears to be an effective and minimally invasive alternative to open surgery for an arteriovenous fistula complicating an anastomotic pseudoaneurysm after an aorto-bi-iliac Dacron graft bypass.

Nelson Wolosker,  Cynthia de Almeida Mendes,  Carlos Jacob … (2010)
INTRODUCTION The incidence of concomitant abdominal aortic aneurysm (AAA) and asymptomatic cholelithiasis is 5% to 6%.1 In such situations, isolated standard AAA repair is associated with acute cholecystitis in up to 18% of these concomitant cases,2 which justifies correcting these two diseases together. When a median route is used, it can lead to infection of the prosthesis. A good alternative for preventing this complication is the use of endovascular techniques that are rarely associated with perioperative cholecystitis3 or the use of two different surgical routes during the same operation.4 With the development of endovascular and videolaparoscopic techniques, a further possibility described in this case report enables correction of the two diseases in the same operation with the aim of diminishing the risk of infection: endovascular treatment of infrarenal AAA associated with laparoscopically assisted cholecystectomy. CASE REPORT A 66-year-old man was found to have an asymptomatic 5.7-cm infrarenal AAA and cholelithiasis on a computed tomography (CT) scan of his abdomen. He had a history of controlled systemic arterial hypertension, myocardial infarction (14 years previously), coronary revascularization (one year previously) and chronic kidney failure. He was undergoing hemodialysis three days a week and awaiting a kidney transplant. An infrarenal AAA measuring 5.7 cm was found while investigating a condition of abdominal pain in the right hypochondrium. On this occasion, chronic calculous cholecystopathy was also diagnosed. Initially, the patient underwent endovascular treatment of AAA, using a Talent bifurcated endoprosthesis measuring 24 × 12 × 140 mm (main body), 14 × 12 × 75 mm (main body extension) and 12 x 12 x 90 mm (left branch) by dissection of the bilateral femoral arteries under general anesthesia. The operation lasted 85 minutes, 180 ml of iodide contrast agent was used, and there were no complications. After closure of the skin and reversion of anticoagulation, the patient underwent laparoscopy-assisted cholecystectomy. During the procedure, gallbladder empyema was observed, and, when drained, it caused extravasation of pus into the abdominal cavity. The bile was sent for bacteriological analysis. Cholecystectomy and intra-operative cholangiography were successfully performed, and a drain was left in the subhepatic space. Empirical antibiotic therapy consisting of endovenous ceftriaxone and metronidazole was started during the operation. The patient demonstrated good postoperative evolution and did not require vasoactive drugs. He underwent hemodialysis soon after the surgical procedure and had the tubes removed in the operation room. Nasogastric intubation was stopped and fluid intake was started after 24 hours. Food intake was started 12 hours later. The drain in the right hypochondrium was removed on the fourth day after the operation. Multisensitive Escherichia coli was identified in the liquid aspirated from the gallbladder. Oral ciprofloxacin treatment was therefore started, and this was maintained for 14 days. The patient’s postoperative course was free of complications, and he was discharged from the hospital on the seventh day after the operation. One month after the surgery, the patient had resumed a normal life. A control CT scan taken six months after the operation is presented in Figure 1. DISCUSSION The surgical approach used with patients having AAA and cholelithiasis is controversial. If we choose to treat only the aneurysm by an intraperitoneal route, the patient may present acute cholecystitis during the immediate postoperative period,1,5 although endovascular techniques reduce this complication.3 If we treat the cholecystopathy alone, the aneurysm might rupt after the operation because of collagenase activity on the aortic wall following the intra-abdominal procedure.7 Simultaneous repair through an intraperitoneal route may cause infection in the prosthesis,5 especially in cases such as the one discussed in this paper, in which silent acute cholecystitis (oligosymptomatic) was diagnosed only during the operation, along with extravasation of its infected content. If the procedure had been carried out using an intraperitoneal route, the prosthesis would certainly have become contaminated. Due to the technique used in this case, the gallbladder contents did not come into contact with the prosthesis at any time, because the two accesses used were not directly accessible to each other. Thus, there was no contamination of the prosthesis and, consequently, no infectious complications. The endovascular repair of aneurysms appears to have a minor incidence of acute cholecystitis in the perioperative period,3 but in a case such as this, in which silent acute cholecystitis was observed, the combined approach was shown to be safe. Endovascular treatment of aneurysms is already well-established.9 It is indicated for patients presenting high surgical risk who are in a good anatomical condition.10 In this case, in addition to presenting these two premises, the patient was waiting for a donor kidney for transplantation. We sought to avoid open procedures to avoid surgical manipulation of the retroperitoneum and thereby to facilitate the kidney transplantation in the iliac fossa. Another advantage of this technique is the shorter duration of ileal paralysis, thus making it possible to resume feeding at an early stage.11 Our patient began receiving food after 36 hours and was able to walk after only six hours. We chose to do the endovascular treatment first because pneumoperitoneum is not a problem when using a non-compressible metallic endoprosthesis.

Impact of endovascular technique in vascular surgery training at a large university hospital in Brazil.

Pedro Puech-Leão,  Nelson Wolosker,  Antonio E Zerati … (2015)
The aim of this study was to determine the impact of endovascular surgery versus open vascular technique training in a Brazilian teaching service. Cross-sectional study. Hospital das Clinicas-Faculty of Medicine-University of Sao Paulo, a tertiary institutional hospital-Brazil. We reviewed 1,040 arterial operations performed during 2 distinct time periods: January 1995 to December 1996, and January 2006 to December 2007. Based on the disease treated, the procedures were classified into the following 5 groups: abdominal aortic aneurysms (AAA), aorto-iliac obstructive disease (AI), obstructive disease of the femoropopliteal-tibial segment (FP), carotid disease (C), and others (O). The operations were also divided into an endovascular surgery (ES) group and an open surgery (OS) group. We compared the number of open and endovascular procedures for each arterial disease group during both periods. During the 2006-2007 period, 654 patients were treated surgically, whereas over the 1995-1996 period, 386 arterial operations were performed. A significant increase in endovascular procedures (p < 0.001) was found from the 1995-1996 period to the 2006-2007 period (35 vs 351, respectively) in all groups, whereas open surgery showed a slight increase in the number of procedures in the AAA and O groups only. In the 1995-1996 period, OS was the primary surgical method for all groups, but in the 2006-2007 time frame, OS was performed more frequently than ES only in the AAA and O groups. Considering all vascular disease groups, OS was the technique used in 90.9% (351 of 386) of the operations during 1995-1996, whereas in 2006-2007, OS was performed in only 46.3% (303 of 654) of the procedures. The increase in the number of ES observed over the past decade has had little impact on OS procedures performed at our medical center, not bringing harm to open surgical training. Copyright © 2011 Association of Program Directors in Surgery. Published by Elsevier Inc. All rights reserved.