Thrombomodulin Ala455Val Polymorphism and the risk of cerebral infarction in a biracial population: the Stroke Prevention in Young Women Study 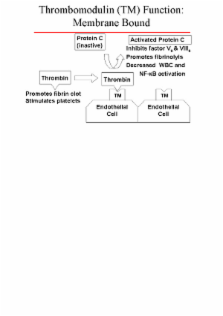 The genes encoding proteins in the thrombomodulin-protein C pathway are promising candidate genes for stroke susceptibility because of their importance in thrombosis regulation and inflammatory response. Several published studies have shown that the Ala455Val thrombomodulin polymorphism is associated with ischemic heart disease, but none has examined the association with stroke. Using data from the Stroke Prevention in Young Women Study, we sought to determine the association between the Ala455Val thrombomodulin polymorphism and the occurrence of ischemic stroke in young women.

All 59 hospitals in the greater Baltimore-Washington area participated in a population-based case-control study of stroke in young women. We compared 141 cases of first ischemic stroke (44% black) among women 15 to 44 years of age with 210 control subjects (35% black) who were identified by random digit dialing and frequency matched to the cases by age and geographical region of residence. Data on historical risk factors were collected by standardized interview. Genotyping of the thrombomodulin Ala455Val polymorphism was performed by pyrosequencing.

The A allele (frequency = 0.85) was associated with stroke under the recessive model. After adjustment for age, race, cigarette smoking, hypertension, and diabetes, the AA genotype, compared with the AV and VV genotypes combined, was significantly associated with stroke (odds ratio 1.9, 95% CI 1.1–3.3). The AA genotype was more common among black than white control subjects (81% versus 68%) but there was no significant interaction between the risk genotype and race (adjusted odds ratio 2.7 for blacks and 1.6 for whites). A secondary analysis removing all probable (n = 16) and possible (n = 15) cardioembolic strokes demonstrated an increased association (odds ratio 2.2, 95% CI 1.2–4.2).

Among women aged 15 to 44 years, the AA genotype is more prevalent among blacks than whites and is associated with increased risk of early onset ischemic stroke. Removing strokes potentially related to cardioembolic phenomena increased this association. Further studies are needed to determine whether this polymorphism is functionally related to thrombomodulin expression or whether the association is due to population stratification or linkage to a nearby functional polymorphism.

Pregnancy and the risk of stroke.