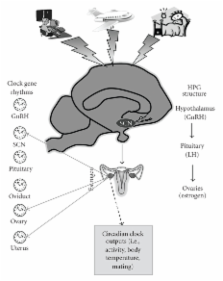 Circadian rhythms and “clock gene” expression are involved in successful reproductive cycles, mating, and pregnancy. Alterations or disruptions of biological rhythms, as commonly occurs in shift work, jet lag, sleep deprivation, or clock gene knock out models, are linked to significant disruptions in reproductive function. These impairments include altered hormonal secretion patterns, reduced conception rates, increased miscarriage rates and an increased risk of breast cancer. Female health may be particularly susceptible to the impact of desynchronizing work schedules as perturbed hormonal rhythms can further influence the expression patterns of clock genes. Estrogen modifies clock gene expression in the uterus, ovaries, and suprachiasmatic nucleus, the site of the primary circadian clock mechanism. Further work investigating clock genes, light exposure, ovarian hormones, and reproductive function will be critical for indentifying how these factors interact to impact health and susceptibility to disease.

Rotating night shifts and risk of breast cancer in women participating in the nurses' health study.

E Schernhammer,  F Laden,  F Speizer … (2001)
Melatonin shows potential oncostatic action, and light exposure during night suppresses melatonin production. There is little information, however, about the direct effect of night work on the risk of cancer. We investigated the effect of night work in breast cancer. We examined the relationship between breast cancer and working on rotating night shifts during 10 years of follow-up in 78 562 women from the Nurses' Health Study. Information was ascertained in 1988 about the total number of years during which the nurses had worked rotating night shifts with at least three nights per month. From June 1988 through May 1998, we documented 2441 incident breast cancer cases. Logistic regression models were used to calculate relative risks (RRs) and 95% confidence intervals (CIs), adjusted for confounding variables and breast cancer risk factors. All statistical tests were two-sided. We observed a moderate increase in breast cancer risk among the women who worked 1-14 years or 15-29 years on rotating night shifts (multivariate adjusted RR = 1.08 [95% CI = 0.99 to 1.18] and RR = 1.08 [95% CI = 0.90 to 1.30], respectively). The risk was further increased among women who worked 30 or more years on the night shift (RR = 1.36; 95% CI = 1.04 to 1.78). The test for trend was statistically significant (P =.02). Women who work on rotating night shifts with at least three nights per month, in addition to days and evenings in that month, appear to have a moderately increased risk of breast cancer after extended periods of working rotating night shifts.

Anders Knutsson (2003)
The effects of shift work on physiological function through disruption of circadian rhythms are well described. However, shift work can also be associated with specific pathological disorders. This article reviews the evidence for a relationship between specific medical disorders and working at night or on shift systems. The strongest evidence exists for an association with peptic ulcer disease, coronary heart disease and compromised pregnancy outcome.

Light-induced resetting of a mammalian circadian clock is associated with rapid induction of the mPer1 transcript.

Yasufumi Shigeyoshi,  Kouji Taguchi,  Shuzo Yamamoto … (1997)
To understand how light might entrain a mammalian circadian clock, we examined the effects of light on mPer1, a sequence homolog of Drosophila per, that exhibits robust rhythmic expression in the SCN. mPer1 is rapidly induced by short duration exposure to light at levels sufficient to reset the clock, and dose-response curves reveal that mPer1 induction shows both reciprocity and a strong correlation with phase shifting of the overt rhythm. Thus, in both the phasing of dark expression and the response to light mPer1 is most similar to the Neurospora clock gene frq. Within the SCN there appears to be localization of the induction phenomenon, consistent with the localization of both light-sensitive and light-insensitive oscillators in this circadian center.