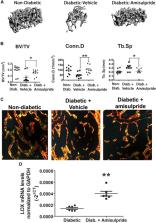 Diabetic bone disease is a complication of type I and type II diabetes, both of which are increasing in the United States and elsewhere. Increased hip and foot fracture rates do not correlate well with changes in bone mineral density (BMD), whereas studies support the importance of collagen structure to bone strength. Extracellular lysyl oxidase (LOX) catalyzes the oxidative deamination of hydroxylysine and lysine residues in collagens resulting in aldehydes that subsequently form critically important biosynthetic crosslinks that stabilize functional collagens. Although LOX‐dependent biosynthetic crosslinks in bone collagen are deficient in diabetic bone, the expression and regulation of bone LOXs in diabetes have not been comprehensively studied. Here, we found that LOX is profoundly downregulated in bone in diabetes. Moreover, we have identified a novel metabolic regulatory relationship that is dysregulated in diabetes using mouse models. Data indicate that the incretin (gastric hormone) known as glucose‐dependent insulinotropic polypeptide (GIP) that is anabolic to osteoblasts strongly upregulates LOX, and that this regulation is disrupted in the streptozotocin‐induced model of diabetes in mice. In vivo and in vitro studies support that diabetes results in elevated circulating peripheral dopamine, likely also derived from the gut, and is responsible for blocking GIP signaling and LOX levels in osteoblasts. Moreover, peripheral administration of the dopamine D2 receptor antagonist amisulpride to diabetic mice restored trabecular bone structure to near normal and partially reversed downregulation of LOX. Taken together our data identifies a novel metabolic relationship between the gut‐derived hormone GIP and bone‐derived LOX, and points to the importance of LOX dysregulation in the pathology of diabetic bone disease. © 2019 The Authors. JBMR Plus published by Wiley Periodicals, Inc. on behalf of the American Society for Bone and Mineral Research.

The biology of incretin hormones.

Effects of obesity on bone metabolism

Jay Cao (2011)
Obesity is traditionally viewed to be beneficial to bone health because of well-established positive effect of mechanical loading conferred by body weight on bone formation, despite being a risk factor for many other chronic health disorders. Although body mass has a positive effect on bone formation, whether the mass derived from an obesity condition or excessive fat accumulation is beneficial to bone remains controversial. The underline pathophysiological relationship between obesity and bone is complex and continues to be an active research area. Recent data from epidemiological and animal studies strongly support that fat accumulation is detrimental to bone mass. To our knowledge, obesity possibly affects bone metabolism through several mechanisms. Because both adipocytes and osteoblasts are derived from a common multipotential mesenchymal stem cell, obesity may increase adipocyte differentiation and fat accumulation while decrease osteoblast differentiation and bone formation. Obesity is associated with chronic inflammation. The increased circulating and tissue proinflammatory cytokines in obesity may promote osteoclast activity and bone resorption through modifying the receptor activator of NF-κB (RANK)/RANK ligand/osteoprotegerin pathway. Furthermore, the excessive secretion of leptin and/or decreased production of adiponectin by adipocytes in obesity may either directly affect bone formation or indirectly affect bone resorption through up-regulated proinflammatory cytokine production. Finally, high-fat intake may interfere with intestinal calcium absorption and therefore decrease calcium availability for bone formation. Unraveling the relationship between fat and bone metabolism at molecular level may help us to develop therapeutic agents to prevent or treat both obesity and osteoporosis. Obesity, defined as having a body mass index ≥ 30 kg/m2, is a condition in which excessive body fat accumulates to a degree that adversely affects health [1]. The rates of obesity rates have doubled since 1980 [2] and as of 2007, 33% of men and 35% of women in the US are obese [3]. Obesity is positively associated to many chronic disorders such as hypertension, dyslipidemia, type 2 diabetes mellitus, coronary heart disease, and certain cancers [4-6]. It is estimated that the direct medical cost associated with obesity in the United States is ~$100 billion per year [7]. Bone mass and strength decrease during adulthood, especially in women after menopause [8]. These changes can culminate in osteoporosis, a disease characterized by low bone mass and microarchitectural deterioration resulting in increased bone fracture risk. It is estimated that there are about 10 million Americans over the age of 50 who have osteoporosis while another 34 million people are at risk of developing the disease [9]. In 2001, osteoporosis alone accounted for some $17 billion in direct annual healthcare expenditure. Several lines of evidence suggest that obesity and bone metabolism are interrelated. First, both osteoblasts (bone forming cells) and adipocytes (energy storing cells) are derived from a common mesenchymal stem cell [10] and agents inhibiting adipogenesis stimulated osteoblast differentiation [11-13] and vice versa, those inhibiting osteoblastogenesis increased adipogenesis [14]. Second, decreased bone marrow osteoblastogenesis with aging is usually accompanied with increased marrow adipogenesis [15,16]. Third, chronic use of steroid hormone, such as glucocorticoid, results in obesity accompanied by rapid bone loss [17,18]. Fourth, both obesity and osteoporosis are associated with elevated oxidative stress and increased production of proinflammatory cytokines [19,20]. At present, the mechanisms for the effects of obesity on bone metabolism are not well defined and will be the focus of this review.