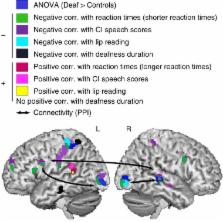 The outcome of adult cochlear implantation is predicted positively by the involvement of visual cortex in speech processing, and negatively by the cross-modal recruitment of the right temporal cortex during and after deafness. How these two neurofunctional predictors concur to modulate cochlear implant (CI) performance remains unclear. In this fMRI study, we explore the joint involvement of occipital and right hemisphere regions in a visual-based phonological task in post-lingual deafness. Intriguingly, we show that some deaf subjects perform faster than controls. This behavioural effect is associated with reorganized connectivity across bilateral visual, right temporal and left inferior frontal cortices, but with poor CI outcome. Conversely, preserved normal-range reaction times are associated with left-lateralized phonological processing and good CI outcome. These results suggest that following deafness, involvement of visual cortex in the context of reorganized right-lateralized phonological processing compromises its availability for audio-visual synergy during adaptation to CI.

Gregory Hickok,  John F. Houde,  Feng Rong (2011)
Sensorimotor integration is an active domain of speech research and is characterized by two main ideas, that the auditory system is critically involved in speech production and that the motor system is critically involved in speech perception. Despite the complementarity of these ideas, there is little crosstalk between these literatures. We propose an integrative model of the speech-related "dorsal stream" in which sensorimotor interaction primarily supports speech production, in the form of a state feedback control architecture. A critical component of this control system is forward sensory prediction, which affords a natural mechanism for limited motor influence on perception, as recent perceptual research has suggested. Evidence shows that this influence is modulatory but not necessary for speech perception. The neuroanatomy of the proposed circuit is discussed as well as some probable clinical correlates including conduction aphasia, stuttering, and aspects of schizophrenia. Copyright © 2011 Elsevier Inc. All rights reserved.

Evaluation of the dual route theory of reading: a metanalysis of 35 neuroimaging studies.

N. Tzourio-Mazoyer,  G. Jobard,  F. Crivello (2003)
Numerous studies concerned with cerebral structures underlying word reading have been published during the last decade. A few controversies, however, together with methodological or theoretical discrepancies between laboratories, still contribute to blurring the overall view of advances effected in neuroimaging. Carried out within the dual route of reading framework, the aim of this metanalysis was to provide an objective picture of these advances. To achieve this, we used an automated analysis method based on the inventory of activation peaks issued from word or pseudoword reading contrasts of 35 published neuroimaging studies. A first result of this metanalysis was that no cluster of activations has been found more recruited by word than pseudoword reading, implying that the first steps of word access may be common to word and word-like stimuli and would take place within a left occipitotemporal region (previously referred to as the Visual Word Form Area-VWFA) situated in the ventral route, at the junction between inferior temporal and fusiform gyri. The results also indicated the existence of brain regions predominantly involved in one of the two routes to access word. The graphophonological conversion seems indeed to rely on left lateralized brain structures such as superior temporal areas, supramarginal gyrus, and the opercular part of the inferior frontal gyrus, these last two regions reflecting a greater load in working memory during such an access. The lexicosemantic route is thought to arise from the coactivation of the VWFA and semantic areas. These semantic areas would encompass a basal inferior temporal area, the posterior part of the middle temporal gyrus, and the triangular part of inferior frontal gyrus. These results confirm the suitability of the dual route framework to account for activations observed in nonpathological subjects while they read.