PREDICT-PD: Identifying risk of Parkinson's disease in the community: methods and baseline results 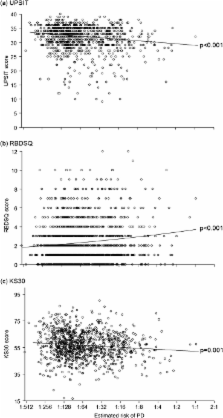 To present methods and baseline results for an online screening tool to identify increased risk for Parkinson's disease (PD) in the UK population.

Risk estimates for future PD were derived from the results of a systematic review of risk factors and early features of PD. Participants aged 60–80 years without PD were recruited by self-referral. They completed an online survey (including family history, non-motor symptoms and lifestyle factors), a keyboard-tapping task and the University of Pennsylvania Smell Identification Test. Risk scores were calculated based on survey answers. Preliminary support for the validity of this algorithm was assessed by comparing those estimated to be higher risk for PD with those at lower risk using proxies, including smell loss, REM-sleep behaviour disorder and reduced tapping speed, and by assessing associations in the whole group.

1324 eligible participants completed the survey and 1146 undertook the keyboard-tapping task. Smell tests were sent to 1065 participants. Comparing the 100 highest-risk participants and 100 lowest-risk participants, median University of Pennsylvania Smell Identification Test scores were 30/40 versus 33/40 (p<0.001), mean number of key taps in 30 s were 55 versus 58 (p=0.045), and 24% versus 10% scored above cut-off for REM-sleep behaviour disorder (p=0.008). Regression analyses showed increasing risk scores were associated with worse scores in the three proxies across the whole group (p≤0.001).

PREDICT-PD is the first study to systematically combine risk factors for PD in the general population. Validity to predict risk of PD will be tested through longitudinal follow-up of incident PD diagnosis.

Association of olfactory dysfunction with risk for future Parkinson's disease.

Helen Petrovitch,  Felix C Tanner,  R Abbott … (2008)
Although olfactory dysfunction is commonly associated with Parkinson's disease (PD), it is not known whether such dysfunction can predate the onset of clinical PD in a community-based population. This study examines the association of olfactory dysfunction with future development of PD in Honolulu-Asia Aging Study cohort members Olfaction was assessed from 1991 to 1996 in 2,267 men in the Honolulu-Asia Aging Study aged 71 to 95 years who were free of clinical PD and dementia at the time of olfaction testing. Participants were followed for up to 8 years for incident PD RESULTS: In the course of follow-up, 35 men were diagnosed with PD (24.6/10,000 person-years). The average age at the time of diagnosis was 82.9 +/- 3.8 (range, 76-93) years, and the average time to a diagnosis was 4.0 +/- 1.9 (range, 1-8) years. During the first 4 years of follow-up, age-adjusted incidence of PD declined from 54.5/10,000 person-years in the lowest quartile of odor identification to 26.6, 8.2, and 8.4/10,000 person-years in the second, third, and fourth quartiles, respectively (p < 0.001 for trend). After adjustment for age and other potential confounders, the odds ratios for PD in the lowest quartile was 5.2 (95% confidence interval, 1.5-25.6) compared with the top two quartiles. This relation was not evident beyond 4 years of follow-up. Impaired olfaction can predate clinical PD in men by at least 4 years and may be a useful screening tool to detect those at high risk for development of PD in later life.

Rapid-eye-movement sleep behaviour disorder as an early marker for a neurodegenerative disorder: a descriptive study.

Mónica Serradell,  Francesc Valldeoriola,  Maria Martí … (2006)
Rapid-eye-movement (REM) sleep behaviour disorder (RBD) is a parasomnia characterised by dream-enacting behaviours related to unpleasant dreams and loss of muscle atonia during REM sleep. RBD may be idiopathic or associated with neurological disease. Available data suggest that in some cases RBD might be the initial manifestation of a neurodegenerative disease. We sought to determine the frequency and nature of neurological disorders developing in patients diagnosed with idiopathic RBD at our sleep centre. We retrospectively assessed 44 consecutive patients (39 men and five women with a mean age of 74 years), with at least 2 years of clinical follow-up after a diagnosis of idiopathic RBD, through a detailed clinical history, complete neurological examination, rating scales of parkinsonism, and neuropsychological tests. 20 (45%) patients developed a neurological disorder after a mean of 11.5 years from the reported onset of RBD and a mean follow-up of 5.1 years from the diagnosis of idiopathic RBD at our sleep centre. Emerging disorders were Parkinson's disease in nine patients, dementia with Lewy bodies in six, multiple system atrophy with predominant cerebellar syndrome in one, and mild cognitive impairment in four in whom visuospatial dysfunction was prominent. Patients with longer clinical follow-up developed a neurological disease (OR 1.512, 95% CI 1.105-2.069; p=0.010). Our study indicates that in people presenting to sleep centres, RBD often antedates the development of a neurodegenerative disorder. Close follow-up of patients with idiopathic RBD could enable early detection of neurodegenerative disease. This finding may be of great interest when early effective treatment strategies and neuroprotective drugs become available.

S Bundlie,  M Mahowald,  R C Schenck (1996)
We report longitudinal data on a group of 29 male patients 50 years of age or older who were initially diagnosed as having idiopathic REM sleep behavior disorder (RBD) after extensive polysomnographic and neurologic evaluations. Thirty-eight percent (11/29) were eventually diagnosed as having a parkinsonian disorder (presumably Parkinson's disease) at a mean interval of 3.7 +/- 1.4 (SD) years after the diagnosis of RBD+, and at a mean interval of 12.7 +/- 7.3 years after the onset of RBD. To date, only 7% (2/29) of patients have developed any other neurologic disorder. At the time of RBD diagnosis, data from the RBD group with eventual Parkinson's disease (n = 11) and the current idiopathic RBD group (n = 16) were indistinguishable, with two exceptions: the RBD-Parkinson's disease group had a significantly elevated hourly index of periodic limb movements of non-REM sleep and an elevated REM sleep percentage. RBD was fully or substantially controlled with nightly clonazepam treatment in 89% (24/27) of patients in both groups. Thus, RBD can be the heralding manifestation of Parkinson's disease in a substantial subgroup of older male RBD patients. However, a number of presumed Parkinson's disease patients may eventually be diagnosed with multiple system atrophy (striatonigral degeneration subtype). Our findings indicate the importance of serial neurologic evaluations after RBD is diagnosed and implicate the pedunculopontine nucleus as a likely site of pathology in combined RBD-Parkinson's disease, based on experimental and theoretical considerations rather than on autopsy data.