Perception of Shadows in Children with Autism Spectrum Disorders 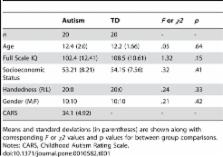 Cast shadows in visual scenes can have profound effects on visual perception. Much as they are informative, they also constitute noise as they are salient features of the visual scene potentially interfering with the processing of other features. Here we asked i) whether individuals with autism can exploit the information conveyed by cast shadows; ii) whether they are especially sensitive to noise aspects of shadows.

Twenty high-functioning children with autism and twenty typically developing children were asked to recognize familiar objects while the presence, position, and shape of the cast shadow were systematically manipulated. Analysis of vocal reaction time revealed that whereas typically developing children used information from cast shadows to improve object recognition, in autistic children the presence of cast shadows—either congruent or incongruent—interfered with object recognition. Critically, vocal reaction times were faster when the object was presented without a cast shadow.

We conclude that shadow-processing mechanisms are abnormal in autism. As a result, processing shadows becomes costly and cast shadows interfere rather than help object recognition.

David R. Simmons, Ashley Robertson, Lawrie S. McKay … (2009)
Autism spectrum disorders (ASDs) are developmental disorders which are thought primarily to affect social functioning. However, there is now a growing body of evidence that unusual sensory processing is at least a concomitant and possibly the cause of many of the behavioural signs and symptoms of ASD. A comprehensive and critical review of the phenomenological, empirical, neuroscientific and theoretical literature pertaining to visual processing in ASD is presented, along with a brief justification of a new theory which may help to explain some of the data, and link it with other current hypotheses about the genetic and neural aetiologies of this enigmatic condition.

Are people with autism and Asperger syndrome faster than normal on the Embedded Figures Test?

T Jolliffe, S. Baron-Cohen (1997)
Previous work suggests children with autism show superior performance (in relation to their general mental age) on the Embedded Figures Test (EFT). Frith interprets this as showing that they have "weak central coherence". In Experiment 1, using an adult level version of this task, we aimed to replicate and extend this finding, first, by collecting response time (RT) data; second, by testing adults with autism of normal intelligence; and third, by testing a group of adults with Asperger syndrome, in order to test for differences between autism and Asperger syndrome. Both clinical groups were significantly faster on the EFT. In Experiment 2, we investigated if this difference was due to a preference for local over global processing, using a novel drawing task based on the classical Rey Figure. The clinical groups did not differ significantly on this test, but there was a trend towards such a difference. Alternative explanations for the EFT superiority in autism and Asperger syndrome are considered.

An islet of ability in autistic children: a research note.

A. Shah, U Frith (1983)
An aspect of cognitive functioning in autistic children was investigated by comparing their performance on the Children's Embedded Figures Test with that of MA-matched normal and MA- and CA-matched mentally retarded non-autistic children. The autistic children were significantly more competent at this task than either group of control children, and also showed qualitatively different strategies. Since the performance of the autistic children was better than predicted from MA and commensurate with CA, it can be regarded as an islet of ability. This finding is discussed in terms of orientation and visualization factors involved in visuo-spatial abilities and is also related to cognitive deficit.