Women's Access and Provider Practices for the Case Management of Malaria during Pregnancy: A Systematic Review and Meta-Analysis 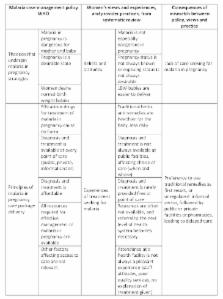 Jenny Hill and colleagues conduct a systematic review and meta-analysis of womenâ€™s access and healthcare provider adherence to WHO case-management policy of malaria during pregnancy.

WHO recommends prompt diagnosis and quinine plus clindamycin for treatment of uncomplicated malaria in the first trimester and artemisinin-based combination therapies in subsequent trimesters. We undertook a systematic review of women's access to and healthcare provider adherence to WHO case management policy for malaria in pregnant women.

We searched the Malaria in Pregnancy Library, the Global Health Database, and the International Network for the Rational Use of Drugs Bibliography from 1 January 2006 to 3 April 2014, without language restriction. Data were appraised for quality and content. Frequencies of women's and healthcare providers' practices were explored using narrative synthesis and random effect meta-analysis. Barriers to women's access and providers' adherence to policy were explored by content analysis using NVivo. Determinants of women's access and providers' case management practices were extracted and compared across studies. We did not perform a meta-ethnography. Thirty-seven studies were included, conducted in Africa (30), Asia (4), Yemen (1), and Brazil (2). One- to three-quarters of women reported malaria episodes during pregnancy, of whom treatment was sought by >85%. Barriers to access among women included poor knowledge of drug safety, prohibitive costs, and self-treatment practices, used by 5%–40% of women. Determinants of women's treatment-seeking behaviour were education and previous experience of miscarriage and antenatal care. Healthcare provider reliance on clinical diagnosis and poor adherence to treatment policy, especially in first versus other trimesters (28%, 95% CI 14%–47%, versus 72%, 95% CI 39%–91%, p = 0.02), was consistently reported. Prescribing practices were driven by concerns over side effects and drug safety, patient preference, drug availability, and cost. Determinants of provider practices were access to training and facility type (public versus private). Findings were limited by the availability, quality, scope, and methodological inconsistencies of the included studies.

A systematic assessment of the extent of substandard case management practices of malaria in pregnancy is required, as well as quality improvement interventions that reach all providers administering antimalarial drugs in the community. Pregnant women need access to information on which anti-malarial drugs are safe to use at different stages of pregnancy.

Malaria, a mosquito-borne parasite, kills about 600,000 people every year. Most of these deaths occur among young children in sub-Saharan Africa, but pregnant women and their unborn babies are also vulnerable to malaria. Infection with malaria during pregnancy can cause severe maternal anemia, miscarriages, and preterm births, and kills about 10,000 women and 100,000 children each year. Since 2006, the World Health Organization (WHO) has recommended that uncomplicated malaria (an infection that causes a fever but does not involve organ damage or severe anemia) should be treated with quinine and clindamycin if it occurs during the first trimester (first three months) of pregnancy and with an artemisinin-based combination therapy (ACT) if it occurs during the second or third trimester; ACTs should be used during the first trimester only if no other treatment is immediately available because their safety during early pregnancy has not been established. Since 2010, WHO has also recommended that clinical diagnosis of malaria should be confirmed before treatment by looking for parasites in patients' blood (parasitology).

Prompt diagnosis and treatment of malaria in pregnancy in regions where malaria is always present (endemic regions) is extremely important, yet little is known about women's access to the recommended interventions for malaria in pregnancy or about healthcare providers' adherence to the WHO case management guidelines. In this systematic review and meta-analysis of qualitative, quantitative, and mixed methods studies, the researchers explore the factors that affect women's access to treatment and healthcare provider practices for case management of malaria during pregnancy. A systematic review uses predefined criteria to identify all the research on a given topic. Meta-analysis is a statistical method for combining the results of several studies. A qualitative study collects non-quantitative data such as reasons for refusing an intervention, whereas a qualitative study collects numerical data such as the proportion of a population receiving an intervention.

The researchers identified 37 studies (mostly conducted in Africa) that provided data on the range of healthcare providers visited, antimalarials used, and the factors influencing the choice of healthcare provider and medicines among pregnant women seeking treatment for malaria and/or the type and quality of diagnostic and case management services offered to them by healthcare providers. The researchers explored the data in these studies using narrative synthesis (which summarizes the results from several qualitative studies) and content analysis (which identifies key themes within texts). Among the studies that provided relevant data, one-quarter to three-quarters of women reported malaria episodes during pregnancy. More than 85% of the women who reported a malaria episode during pregnancy sought some form of treatment. Barriers to access to WHO-recommended treatment among women included poor knowledge about drug safety, and the use of self-treatment practices such as taking herbal remedies. Factors that affected the treatment-seeking behavior of pregnant women (“determinants”) included prior use of antenatal care, education, and previous experience of a miscarriage. Among healthcare providers, reliance on clinical diagnosis of malaria was consistently reported, as was poor adherence to the treatment policy. Specifically, 28% and 72% of healthcare providers followed the treatment guidelines for malaria during the first and second/third trimesters of pregnancy, respectively. Finally, the researchers report that concerns over side effects and drug safety, patient preference, drug availability, and cost drove the prescribing practices of the healthcare providers, and that the determinants of provider practices included the type (cadre) of heathcare worker, access to training, and whether they were based in a public or private facility.

These findings reveal important limitations in the implementation of the WHO policy on the treatment of malaria in pregnancy across many parts of Africa and in several other malaria endemic regions. Notably, they show that women do not uniformly seek care within the formal healthcare system and suggest that, when they do seek care, they may not be given the appropriate treatment because healthcare providers frequently fail to adhere to the WHO diagnostic and treatment guidelines. Although limited by the sparseness of data and by inconsistencies in study methodologies, these findings nevertheless highlight the need for further systematic assessments of the extent of substandard case management of malaria in pregnancy in malaria endemic countries, and the need to develop interventions to improve access to and delivery of quality case management of malaria among pregnant women.

Why Do Women Not Use Antenatal Services in Low- and Middle-Income Countries? A Meta-Synthesis of Qualitative Studies

Factors Affecting the Delivery, Access, and Use of Interventions to Prevent Malaria in Pregnancy in Sub-Saharan Africa: A Systematic Review and Meta-Analysis

Social and Cultural Factors Affecting Uptake of Interventions for Malaria in Pregnancy in Africa: A Systematic Review of the Qualitative Research

Christopher Pell,  Lianne Straus,  Erin Andrew … (2011)
Background Malaria during pregnancy (MiP) results in adverse birth outcomes and poor maternal health. MiP-related morbidity and mortality is most pronounced in sub-Saharan Africa, where recommended MiP interventions include intermittent preventive treatment, insecticide-treated bednets and appropriate case management. Besides their clinical efficacy, the effectiveness of these interventions depends on the attitudes and behaviours of pregnant women and the wider community, which are shaped by social and cultural factors. Although these factors have been studied largely using quantitative methods, qualitative research also offers important insights. This article provides a comprehensive overview of qualitative research on social and cultural factors relevant to uptake of MiP interventions in sub-Saharan Africa. Methods and Findings A systematic search strategy was employed: literature searches were undertaken in several databases (OVID SP, IS Web of Knowledge, MiP Consortium library). MiP-related original research, on social/cultural factors relevant to MiP interventions, in Africa, with findings derived from qualitative methods was included. Non-English language articles were excluded. A meta-ethnographic approach was taken to analysing and synthesizing findings. Thirty-seven studies were identified. Fourteen concentrated on MiP. Others focused on malaria treatment and prevention, antenatal care (ANC), anaemia during pregnancy or reproductive loss. Themes identified included concepts of malaria and risk in pregnancy, attitudes towards interventions, structural factors affecting delivery and uptake, and perceptions of ANC. Conclusions Although malaria risk is associated with pregnancy, women's vulnerability is often considered less disease-specific and MiP interpreted in locally defined categories. Furthermore, local discourses and health workers' ideas and comments influence concerns about MiP interventions. Understandings of ANC, health worker-client interactions, household decision-making, gender relations, cost and distance to health facilities affect pregnant women's access to MiP interventions and lack of healthcare infrastructure limits provision of interventions. Further qualitative research is however required: many studies were principally descriptive and an in-depth comparative approach is recommended.

This work was supported by a Master Service Agreement (contract # 20762) from the Bill & Melinda Gates Foundation to the Liverpool School of Tropical Medicine. The funders had no role in study design, data collection and analysis, decision to publish, or preparation of the manuscript.

Data Availability The authors confirm that all data underlying the findings are fully available without restriction. All relevant data are within the paper and its Supporting Information files, and the published studies are available on the the Malaria in Pregnancy (MiP) Library ( http://library.mip-consortium.org), the Global Health Database ( http://www.ebscohost.com/corporate-research/global-health), and the International Network for Rational Use of Drugs (INRUD) Bibliography ( http://www.inrud.org/Bibliographies/INRUD-Bibliography.cfm).
Data availability:
ScienceOpen disciplines: Medicine